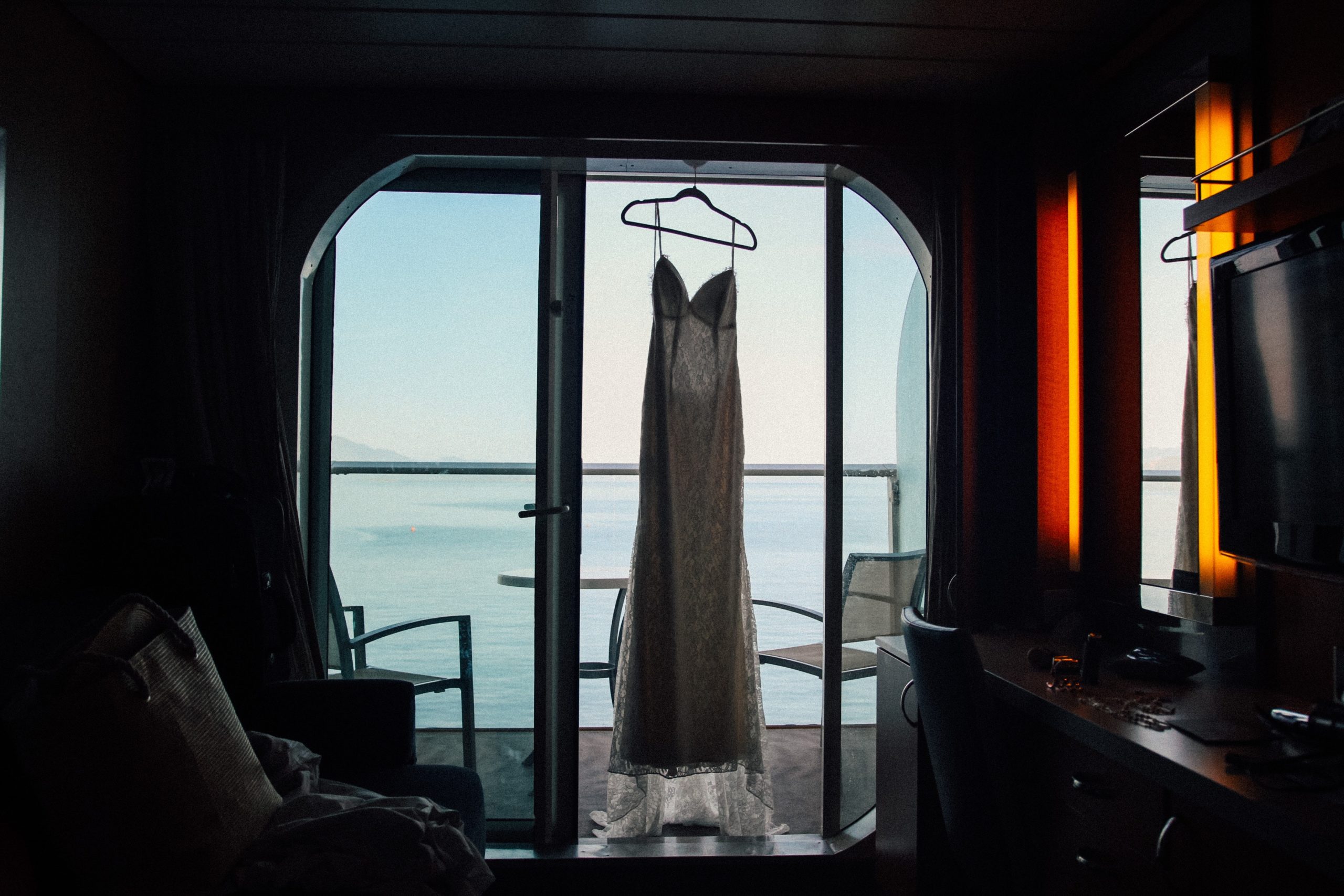 What do you do with a $5,000 Carolina Herrera wedding dress after you’ve gotten divorced? Do you tailor it above-the-knee and dye it black and pair it with chunky, clunky Doc Martens and wear it to the Eagle Rock Trader Joe’s late-night whilst shopping for your kids’ school lunch snacks? Do you donate it to the local hachnasat kallah for a Jewish bride in need? Do you list it on TheRealReal and maybe make back half of what you paid for it and use the cash for a Single Working Jewish Mom Fuck It Trip to Cabo?

It was not the first wedding dress I purchased. That inaugural monstrosity of dupioni silk and crystal appliques came from Priscilla of Boston, the now defunct high-end bridal boutique on Boylston Street where my mother insisted we shop because Priscilla Kidder designed the bridesmaids’ gowns for Grace Kelly.  I’d been living in LA for nine years at that point, but my fiance and I were both from the east coast, and our engagement fete that mid-November weekend—tea and bellinis, a party invite title my father, a Russian-Jewish Masshole raised on kishka and borscht, is still attempting to parse—made for the perfect opportunity to buy everybody’s outfits for the impending nuptials that following June.

Not that we were even remotely in the same financial bracket as Monaco’s House of Grimaldi—my dad was a public school teacher who worked in advertising sales on the side. But I was his only daughter and my then 93-year-old grandmother never got to throw a wedding for my dad’s sister because she was killed in a car crash over Pesach in 1965, just days after she turned 19, and my dad was going crazy with credit cards buying things for this wedding that nobody could really afford. It was a spending spree out of the DSM-V, from the Doo-wop/R&B band whose setlist included Marvin Gaye and Barry Gibb and Barbra Streisand duets (the lead singer later become a Trumpie and my dad defriended him on Facebook); to the Klezmer quartet playing an instrumental rendition of Erev Shel Shoshanim as I walked down the aisle; to the moshgiach who took 15 minutes to verify the Four Season’s kitchen was kosher and sent a bill for an amount more than a semester of books at U. Mass.

The Priscilla salesgirl pushed a rack of satin and crepe and pearl-beaded ball gowns into the dressing room area, presenting each one with an outstretched arm as if they were newborn infants about to be measured on the APGAR scale. It was a dizzying flurry of blinding white and I had a hard time distinguishing between any of them. This was already worse than my bat mitzvah, where my ruffled pink dress made me look like a cupcake and my dad clapped halfway through my haftarah portion, signaling that I was chanting too fast, and I lost my spot and nervously laughed and nicked my tongue on my braces, tasting blood as I stood on the bima, looking up just as an eccentric great aunt was entering the sanctuary in a giant red hat too wide to fit through the doorway.

Eventually, the Priscilla salesgirl held up a dress with a heart-shaped neckline and enough mirrored  crystals on the bodice to ignite a fire if left in the sun. It was a dress befitting the social secretary of a sorority, or at the very least someone blonde. It was all so hideously wrong for a girl who walked around in flip-flops and sweats with CORNELL lettering embossed across the ass. “It’s stunning!” said my mom, now on the verge of tears. “We’ll take it!”

It was all turning into a circus, and I wanted to say no, but I also wanted to get out of there as soon as humanly possible. So I focused not on the absurdity of the dress, but the myriad reasons neurotic 31 year-olds have a big Jewish wedding to begin with, namely to compensate for what we have collectively lost along the way: my fiancé’s dead father (a world-renowned radiologist who’d died of cancer months prior), my maternal dead grandparents and paternal dead grandfather, my father’s dead sister, the six million Jews murdered in the Holocaust and the babies never born. God, the Torah, my ovaries.

There were so many people, places and things for whom one needed to get married. This dress carried the weight of the entire history of the Jewish people.

Months later, I walked into Saks Fifth Avenue on Wilshire and saw a different sort of dress: layers of tulle draped over a plain white sheath and a ribbon of pale blue running along the underside of the hem. Simple, clean, subtle. It was a pretty dress, and it didn’t resemble a disco ball. Carolina Herrera had dressed a steady parade of socialite brides, from Caroline Kennedy to Portuguese noblewoman Diana de Cadaval. Renee Zelwegger was wearing a lot of Carolina Herrera in those days—she married Kenny Chesney in one of the eponymous label’s fit-and-flare silhouettes—and not that I was Renee Zelwegger, but I also wasn’t a debutante. So we returned the first dress and put this second one on a credit card and added a custom-made shrug for tznius purposes. Who cared how much it all cost?

A marriage was forever.

In the days following our wedding, while my new husband and I were smoking Benson and Hedges and drinking pineapple vodkas on a Third World Caribbean island nation, my mother had the dress French-pressed, sealed airtight in a soft, dun grey garment bag—along with my husband’s three-piece suit and the tuxedo and velvet bow-tie ensemble my dog (a bichon-poodle mix rescued from the streets of Tijuana) had worn to the after party, right before he took a giant shit in the hallway of the Four Seasons.

I hung the dress in my closet in Los Angeles, and there it stayed, for a decade. Over the course of those ten years, there were so many things that went missing: my husband’s wedding band, which slipped off while he was swimming in the ocean; our ketubah (lost in a move between apartments), a tiny gold necklace with our children’s names engraved in Hebrew. Our relationship was disintegrating, one ritualistic talisman at a time. There were marriage counselors (one fired us, ordering us to write him a check and never come back) and appointments with psychiatrists poring over our son’s autism spectrum diagnosis and screaming matches over the price of Glatt kosher chicken breasts at Cambridge Farms. In July 2013, my brother-in-law died in a cliff-jumping accident on Lake Champlain; it took three days for divers to recover his cold, broken body, twisted amongst the lake grass. Like a galactic implosion, our marriage dissolved into dust.

But there’s never one reason a marriage ends—or maybe even starts—and I am no angel with whom to cohabit. I cook a total of three items, I leave dirty towels on the floor, I burst into rages of anxiety-induced panic. During yichud, in those moments when a bride and groom are supposed to merge into one, my husband was silent and pensive, and I was cajoling him over flutes of fizzy Yarden and knishes to say something—anything. Even then we were like water and air.

Our daughter was about six, an age at which the desire to play dress-up and make-believe is rooted firmly inside a child, and I wondered what that wedding dress looked like, all these years in. I drew it out of its plastic encasement, and there it was, a tea-colored stain roughly the size of my daughter’s head. I had no idea how it got there; it was not there when my mother had it French-pressed. But we played with it anyway, snapping photos of my daughter posing with the accompanying veil, photos of the veil on my dog (now dead), photos of me in the dress, unable to zip it up all the way, two pregnancies and emergency C-sections later.

On the day that our marriage was dissolved—the court-stamped documents arriving in the mail on Yom Kippur 2019—I still wondered what to do with that dress. We can remove the stain, said a dry cleaner. Save it for your daughter, friends said. She can dye it flamingo pink and wear it to prom, like Molly Ringwald. But this to me made no sense. My daughter is now 12. She wears cropped tops from Brandy Melville and ripped sweatshirts that say Nantucket. Why would I want my daughter to wear a divorce dress, a dress worn during a marriage that did not last? A dress that is  stained, dirty, cursed.

But to be honest, I don’t feel like selling it, or even knowing that somebody else is wearing it. This Carolina Herrera wedding dress is one of the most beautiful things that I have ever owned. Sometimes I think about framing it, like at a fashion exhibit at the MET. Sometimes I think about putting it on again, just to see what it looks like, a relic of promise that hung in the air from before life ruined it all. Truth is, I’m not in the mood to lose everything. If you want to, I figured out, there are some things from a marriage you get to keep. Some things you can’t get rid of. Some things never go away.

Peak Jewish Divorcee is a bi-weekly column charting the (mis)adventures of a Jewish, newly single working mom in Los Angeles.

Malina Saval is an award-winning features editor at Variety and the author of The Secret Lives of Boys: Inside the Raw Emotional World of Male Teens. Her articles and essays have appeared in Los Angeles Times, Los Angeles Review of Books, Glamour, Jerusalem Post, Tablet, and various other publications. She sits on the board of the Los Angeles Press Club and has appeared on such programs as NPR’s Talk of the Nation, CBS Radio, and the Patt Morrison Show.