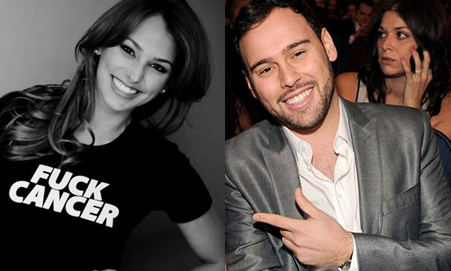 While Sheldon Adelson might think Birthright is the only thing keeping American Judaism alive, fear not, young Jews: there is hope for us yet. The New York Post reports that Scooter Braun, the Emory dropout who made Justin Bieber the world’s biggest superstar, is dating Fuck Cancer founder Yael Cohen.

This uber-entrepreneurial Jewcy power couple is out to change the world, making big names for themselves in the process. Cohen, whose in-your-face organization aims to shift the way people view and talk about cancer by promoting education and early detection practices, was named one of Fast Company’s 100 Most Creative People in Business in 2012. The 26-year-old was born in South Africa and grew up in Vancouver (no doubt she’s a big fan of her compatriot Bieber). The Greenwich-bred Braun, meanwhile, who has referred to himself as “a camp counsellor for pop stars,” made this year’s Time 100 list. He also manages burgeoning acts like Carly Rae Jepsen and Psy—which means he’s partly responsible for the non-stop loop that is “Gangnam Style.” Thanks a lot, dude.

Cohen probably likes to discuss her passion, philanthropy. Luckily, Braun requires that all of Bieber’s investment deals contain a charitable component. And his younger brother Adam, a former Big Jewcy honoree, runs Pencils of Promise, a non-profit dedicated to building schools in the developing world. The Biebs, naturally, is a big supporter of the cause.

Mazel tov to the happy, star-studded couple. Your move, Adelson.