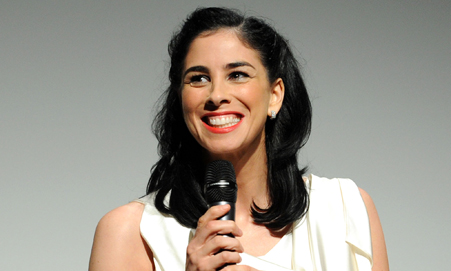 I happened to have read your letter of “advice” to Sarah Silverman, well, because you chose to publish it in an open forum. But that’s cool—who doesn’t enjoy personally directed, insulting missives under the guise of “concern” on the Internet? I can’t wait for the day when my therapist publishes his notes on our sessions because he’s so worried about me.

I usually don’t intrude in private matters between self-righteous rabbis and Jewish comedians, but since you used the English language and my chosen medium, writing, I felt compelled to respond. If you had done a piece of performance art or tapped this message out in Morse code, I would’ve been less offended. Instead I would’ve thought, hey, that’s cool but I don’t get it. I really don’t understand most performance art because I’m too lowbrow and unsophisticated.

Before I go any further, I need to establish our Jewish bona fides, which will then permit me to openly insult you. Your name is Rosenblatt. My name is Meyers. Maybe we know some people in common? No? Well then, try Yudkovitch. My dad changed his last name so I’m not actually related to any Meyers.’ Do you know any Yudkovitches? Still no? Well, I tried. I’m sure if we keep at this longer, we’d come up with at least one person.

Now let’s get down to the “crude” and “vulgar,” and worst of all, “political.” You have a problem with women like Silverman, who uses her fame and platform to advocate for causes she believes in when she should really just get married already. I mean, if you have kids, why would you care that minorities are being illegally disenfranchised and having their civil rights stripped away? Because—look at the cute drawing Yaakov just made! My kid’s smile melts away all of the injustices of the world and makes them unimportant!

But Rabbi, here’s where you’re mistaken. Politics and motherhood are not really that different. In fact, being politically engaged is pretty similar to being a parent if you think about it for a moment.

Politics can keep you up at night (especially if you have a fever dream contemplating a Paul Ryan vice presidency). It can make you angry. It will inevitably disappoint you. It can even waste your money and crash your “car”—if the “car” in question is the wars in Iraq and Afghanistan and our foreign policy. Even totaling your Prius (wait, that car is too “political,” make it an Escalade instead) won’t run up as big a tab as a land invasion of a sovereign Middle Eastern country.

And, like a fetus, politics can even get up into your lady business. Just look at the last twelve months of Republican sponsored legislation across this country. (Tranvaginal ultrasound anyone?) I feel less alone already!

True, politics may never bring you breakfast in bed, but eating in bed is gross. Think of the sheets!

I guess you can probably tell from my tone and snark and my disdain for breakfasts served on my bed sheets by well-intentioned kids that I’m not a mother. Yes, my uterus has been vacant for almost 30 years and I’m cool with that. Maybe one day I’ll have kids (I’m actually open to it), but I’ve never been the type of woman who fantasized about her wedding or the expensive preschools I would send my toddlers to. I don’t look at tiny outfits and coo. Usually, I’m filled with self-loathing that there are little kids out there dressed more fashionably than I am.

Of course, let us not forget that your diatribe was not only offensive to women like Silverman, who are child-free by choice. It also signals to women who are unable to have children that they are less than, that they can’t possibly find happiness since they are not fulfilling their womanly destiny. Undoubtedly, you’ll counter that you didn’t mean these women, who are so unlucky as to be unable to have children. Because they would choose to have kids if they could do so.

Once again, the debate hinges on choice. A woman choosing to remain childless is what is actually galling to you. There aren’t a lot of us left and for men like you, an empty Jewish uterus is a crime. Filling them up with offspring is absolutely imperative. Wasn’t that the gist of Herbert Hoover’s 1928 presidential campaign slogan? A chicken in every pot. A car in every driveway. A baby in every uterus.

Anyway, I don’t want to end this on a sour note. We’re both Jews and we’ll have to hug it out at the next tribal council. And you were magnanimous enough to end your letter to Silverman with a blessing that all of the things she doesn’t wish for herself—marriage and children—happen anyway. The very height of charity! So Rabbi, I’ll do the same for you. May you be zocheh to live many, many more years to see the continued march of feminism and more women like Silverman who use public platforms to fight for what they believe in, regardless of whether or not they’ve chosen to procreate.

P.S. I would’ve written “love” in the signoff, but I was afraid that you would misconstrue that as a sign of my emptiness, of how I’m desperate to be loved because I’m not married and don’t have children. I know how much you rabbis enjoy textual analysis.

How to Blow a Kid’s Mind About Chanukah