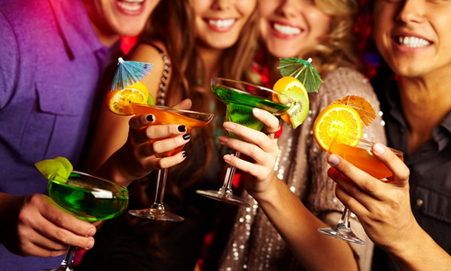 For many Americans, Christmas Eve can be a time to go to church, sing carols, and be with loved ones. But, Dec. 24 also marks a lesser known, but just as memorable time of year for the Jewish singles of New York: The Ball, a time to squeeze into cleavage-baring cocktail dresses, do shots of flavored vodka, and hook up with other members of the Tribe.

Organized by LetMyPeopleGo (yup, that’s the real name), The Ball is billed as “the nation’s largest Jewish singles event.” Not to be confused with the Matzo Ball or the myriad others singles events for Jews that are held on Christmas and Christmas Eve, The Ball is its own unique set of debauchery for the youngest People of the Book, as well as the largest in the New York area. When I bought my first ticket to it, my mother beamed at the thought of me mingling with clean-cut, eligible Jewish bachelors. Little did she—or, at that time, I—know that The Ball is arguably the sloppiest gathering of Jewish singles looking to get some outside of an AEPi formal.

That first encounter was in 2010, one month after my 21st birthday. I was halfway through my senior year of college, and I was very ready for my first taste of the future post-college world of dating. Of course, that’s because I assumed it would be just like Sex and the City—complete with handsome older (Jewish) men, witty banter, and fabulously delicious cocktails that I’d never have to pay for.

Yes, my expectations were fantastically, unrealistically high for a Jewish singles event, but it wasn’t as if I had expected to find my beshert, my destined Jewish soulmate, there. Okay, maybe a small part of me was hoping I’d find him. Like most of my Jewish friends, we prioritized dating a member of the tribe over anyone else, and a club on Christmas Eve seemed like it offered the best odds.

However, as we piled into the cab to Marquee, I quickly realized that nobody was expecting to find her beloved that evening—or do much talking. One friend announced that the girl who made out with someone first earned free drinks from the rest of us. Her co-worker added the same went for whoever hooked up with the most guys. There was a bounty on heads; apparently, we were going to be the New Orleans Saints of the Jewish singles scene.

Everyone had wised up to the fact that a giant Jewish singles event is the last place on Earth where you’d actually experience love at first sight. It was too loud and too crowded to even find the dear friends you came with. In this environment, you wouldn’t recognize your beshert if he fell from the sky and landed right in front of you stomping on a wine glass.

Within minutes of entering the club, I was standing alone as my fellow Jewesses had dispersed to flirt. I felt like I lost my voice and could only squeak against the blare of “Bottoms Up.” At that moment, I realized this was survival of the fittest; I was scared, lonely, and vulnerable. Switching my focus from romance to competition seemed like the best strategy for surviving the evening.

Minutes later, I was kissing the first guy who wrapped his arm around my waist. You could offer me a million dollars and a date with Andy Samberg to tell you his name or a single fact about him, and I still couldn’t. The same goes for the second guy I hooked up with that night. I can recall more identifiable features of the guard yelling at me for making out on the leather couches than my fleeting partner in crime.

And I didn’t, and still don’t, have, any regrets about my random make-outs. It was fun; I felt grown-up, sexy (yes, to my goody-two-shoes self, that was sexy), and most importantly, I felt emotionally unscathed.

By my second year of The Ball, I was happy that hookups rather than romance were the only thing in store for in the evening. I was a few months into New York’s Jewish dating scene, and it left me with the desire to shield myself from failed expectations. I hadn’t ventured into JDate, but only because I couldn’t imagine paying a fee to engage in intra-Tribe dating when it already disappointed me so much. Unreturned texts, promising first dates that never led to seconds, and overwhelmingly crowded Shabbat onegs had only frustrated me. The right Jewish guy seemed too precious and, therefore, impossible to find in any of the five boroughs, let alone at The Ball.

So, to dampen any hopes for love, I treated the night as a game. I cooled my desires with competition, as I had learned the safest skill in romantic survival was to expect nothing great and nothing permanent. My second year proceeded much as the first, with the biggest difference being Artichoke Basille’s replacing McDonald’s as our post-Ball meal.

Yet over the course of the following year, I became more aware of how The Ball mentality was impacting my approach to dating. I was overly pessimistic and distant toward romantic prospects. I spoke about relationships as if it were implausible for their shelf lives to last longer than a week. A friend who’s attended The Ball with me every year called me out on this behavior. “It’s one thing to have a cautious mentality,” she said, “but yours is apocalyptic.”

It is with her words ringing in my ears that I contemplate buying a ticket for my third consecutive trip to The Ball. I looked forward to it every year, and not just because I enjoy the random, PG-13 hookups. The ritual of embracing my identity as a single Jewish woman, of owning an aspect of my life that the rest of the time I find myself either trying to change or having to justify, is liberating. At the same time, I wonder if another year is good for me. The ironic distant I cultivate at an event like The Ball isn’t so healthy to have year-round. And maybe now, I need to let my guard down a bit.

My first time at The Ball taught me how to protect myself against the disappointments of dating and armor myself from the pain of attachments. Perhaps by abstaining from it this year I can undo just the right amount of that learning.

Emily Shire works for The Week magazine in New York and has written for Slate, The Forward, and HelloGiggles among other publications. In many of her writing endeavors, she divulges too much personal information, generally to the chagrin and embarrassment of her family. Follow her on Twitter at @eshire.

In the Beginning, There Was Carrie and There Was Big