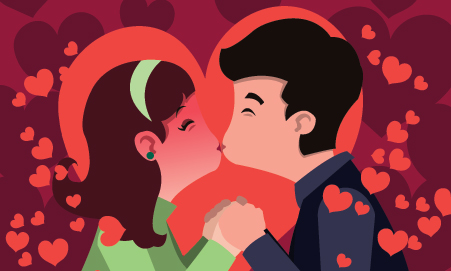 Whether you’re spending Valentine’s Day watching movies on the couch with your girlfriends or on a romantic date with your significant other, we’ve got you covered with some of Jewcy’s best love stories. As Sir Marvin Gaye says, “As long as you’re groovin’, there’s always a chance, somebody watching, might wanna make romance!”

♥ When hundreds of drunk young Jews are piled into a loud, sweaty club for a ‘Jewish singles’ event, it’s natural to expect sparks, butterflies, and a little bit of mishegas. But if you’re looking for your beshert, the shlep to the party might not be worth your time—you’ll have a fun night out with your friends, but you probably won’t meet your future husband.

♥ This one makes us feel a little uncomfortable, but we have to admit the sentiment is cute: They met on JDate, and he proposed with this elaborate song-and-dance video.

♥ Now that marriage proposals are going viral, the bar is being set higher and higher for nice Jewish guys popping the question on camera. This groom-to-be went with the Bruno Mars approach for his choreographed proposal video.

♥ Who doesn’t love Shosh? I mean really, she’s the epitome of neurotic, funny Jewish girl stuck in the days of Juicy sweat-suits. In real life, actress Zosia Mamet would rather be home reading a book, and we’d definitely rather be watching her on Girls than on a lame Valentine’s Day date tonight.

♥ Craigslist can be creepy, but we’ve all prowled the site looking for an apartment or a job. There was no lasting love connections made at the infamous Craigslist Shabbat shindig, but it sounds like it was a fun night at least. There’s always JDate…

Happy Valentines Day from all of us at Jewcy!

What to Get Your Jewish Partner for V-Day— Fast