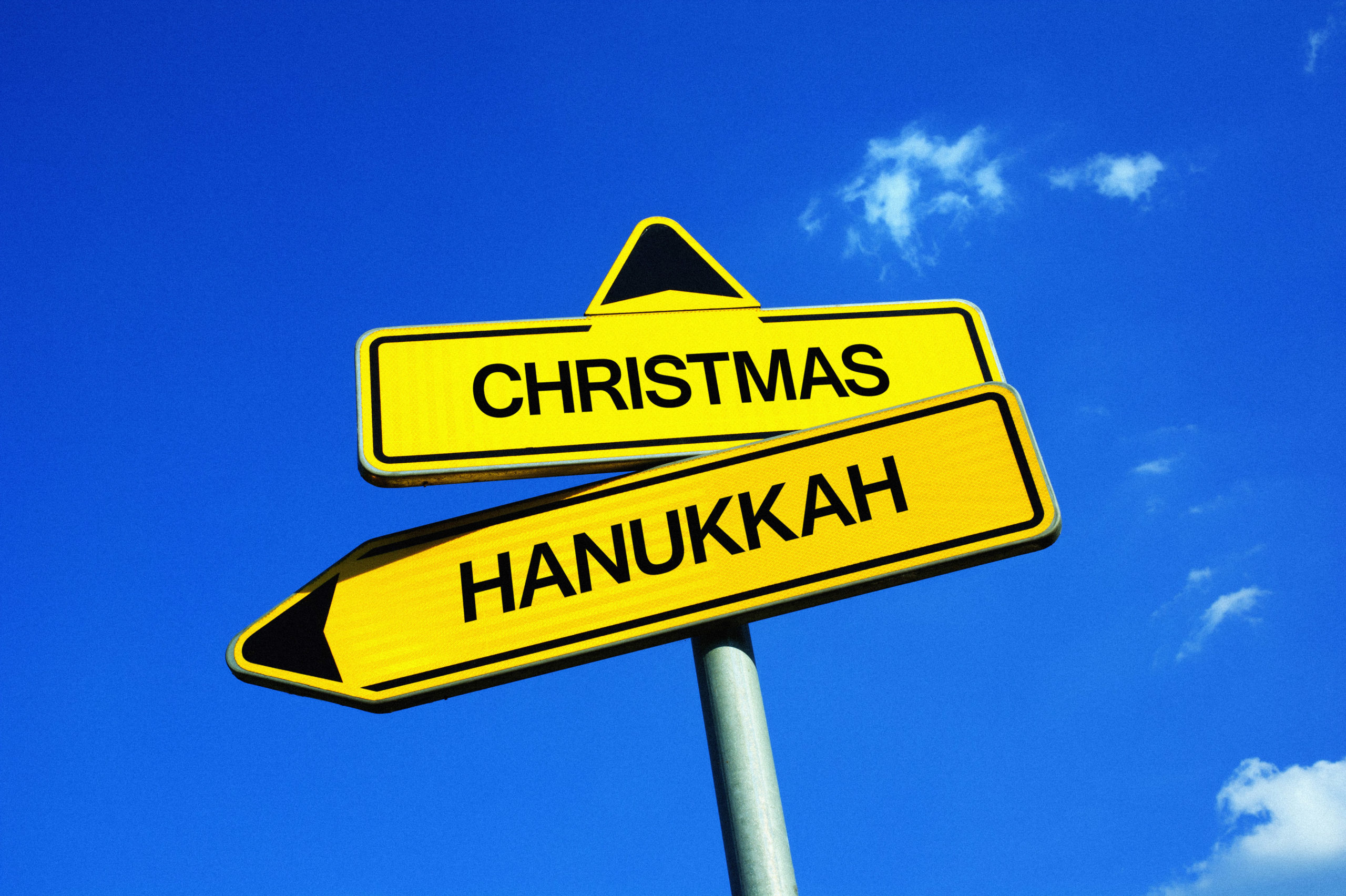 This won’t make me popular in some neurotic circles, but my Hebrew name means “The Bringer of Light” so I am going to illuminate the obvious for you: Hanukkah is bullshit and Christmas is awesome. When it comes to winter holiday enchantment, our Festival of Lights doesn’t hold a candle to the Festival of Christ.  There are many reasons why Christmas kicks the royal tar out of Hanukkah, but I didn’t fully comprehend them until a few years ago. Unlike many Jewish kids who pine to celebrate the yuletide, I was never ashamed of Hanukkah-I actually took pride in our lackluster, knockoff celebration-and thus remained woefully ignorant of Christmas’s manifest superiority. My gentile classmates got to make cookies shaped like trees and Santa hats, but I busied myself in the back of the room with an activity book of Hanukkah-themed crosswords, mazes and connect-the-dots. As the only Jew in my class, growing up in Alaska, I was special! I got to do my own thing! I didn’t need Christmas!

(Fun Fact: There are not many Jews in Alaska, mostly because Sarah Palin hunts us from her helicopter.)

The bells and whistles of Christmas seemed worthless because I had menorahs, dreidels, latkes and gelt-chocolate coins that Jews use to teach our young children about the glories of compound interest-to occupy my time; they were just as good, right? (Correct Answer: no, they were not.) As the years passed, I evolved from a child to a college student-my central vice evolved from toys to liquor, although my behavior was still “childish” according to various ignorant females-and Hanukkah became more of a joyless obligation: a holiday marked with a shrug instead of celebratory anticipation. It existed, much like homeless people and God, but was not something I bothered to think about, if I could help it, much like homeless people and God. And then my shikse girlfriend’s parents invited me to celebrate Christmas in New England, which changed everything.

At first I nervously turned down their request; I would feel like I were visiting a foreign country without any knowledge of the local customs, such as how to open an advent calendar, or the best way to sit on an old bearded man’s lap as I tell him my deepest desires. (Just kidding, I was already familiar with the latter custom… intimately familiar.) My shikse‘s parents changed my mind, however, when they promised to stifle any discussion of Jesus the Super-Powered Baby, mostly because they are atheists. And guess what? Christmas is FUCKING AMAZING! My family never drank at Hanukkah-everyone knows that Jews can’t drink-but Christmas is a friggin’ booze-fueled bacchanalia: egg nog spiked with whiskey, apple cider flavored with rum (my girlfriend’s grandmother’s recipe-you rock my world, Nana!), and wine by the litre/megalitre/gigalitre/tetralitre/yottalitre. Yes, there is such a thing as a yottalitre, and it will get you fucked up.

Still don’t believe me that Christmas is fucking awesome? I’ll prove it. Go listen to “Jingle Bell Rock.” Does that song kick ass or what? Jingle bell time is a swell time! How could you possibly be sad while listening to this masterpiece of pure sonic joy? It’s like an angel’s voice, whispering into your ear, or the soothing sound of an abortion machine sucking fetuses down to hell (“vvvvvvvvv-vroooooooooooooooooom“). Now go listen to that goofy, obnoxious turd “I Have a Little Dreidel.” What a sick fucking joke. “Then dreidel I shall play”? FAIL. (By the way, I received an instant message from a friend today: “my SIRIUS radio has four holiday stations right now, and one of them is ‘Hanukkah.’ What the hell is Hanukkah music? ‘Money’ by Pink Floyd?” For some reason he did not want his name revealed in this column.)

Here is something else that annoys me: I’ve typed Hanukah/Chanukah/Hanukkah/Hannukkkakahahahaakahaakaaha a trillion different ways while writing this column-despite my commitment toward consistency in everything that I attempt, which normally comes effortlessly-because the goddamned spellchecker accepts all of them. Also: the date of Hanukkah changes dates every fucking year because Jews insist on using the lunar calendar, which the rest of the human race chucked like twenty million years ago. Aren’t we supposed to be smarter than everyone else? What the fuck is wrong with us? How did we get all those Nobel prizes-and control of the mainstream media, Wall Street, Hollywood, the American government, etc. (just kidding about that last one!)-when we can’t settle on one spelling and one date for our most famous fucking holiday? It’s easy to forget the date of Hanukkah, but nobody will ever forget the 25th of December-glorious, blissful Christmas-which is not historically out of place for American Jews. According to David Greenberg at Slate: “Around 1900, millions of eastern European Jews … adopted American traditions, including the newly secularized Christmas. … Jews installed Christmas trees in their homes and thought nothing of the carols their children sang in the public schools.” In other words, “Chrismukkah” is already part of our tradition.

Not to sound like Bill O’Reilly-whom I am sending a handle of Jameson Irish Whiskey for Christmas; we all know that it’s his favorite breakfast snack-but when hysterical Jewish parents (are there any other kind?) protest secular mentions of Christmas in the public square, I want to shove mistletoe down their Grinchy throats. For example, earlier this month a Jewish mother temporarily convinced a North Carolina elementary school to ban “Rudolph the Red-Nosed Reindeer” from its kindergarten concert because the song contains a lyric about Santa, but local Christians went crazy and basically threatened a Second Holocaust; the administrators caved, which is fine by me because Christmas is awesome. Church and State must be separated, of course, but it’s more important to keep Young Earth creationists out of the classroom than Frosty the Snow Man. (Bonus Culture War Victory: Frosty will make impressionable students far more tolerant of homosexuality.)

By the way, this hysterical Jewish mother is probably unaware that a Jew wrote “Rudolph the Red-Nosed Reindeer.” In fact, Jews are behind such secular holiday classics as “The Christmas Song (Chestnuts Roasting On An Open Fire),” “Holly Jolly Christmas,” “Santa Claus is Coming to Town,” “Silver Bells,” “It’s the Most Wonderful Time of the Year,” “Sleigh Ride,” “Rockin’ Around the Christmas Tree,” “Let It Snow! Let it Snow! Let It Snow!” and “White Christmas,” the perennial favorite of Neo-Nazis around the world. I don’t feel guilty for loving Christmas, mostly because Jews pretty much created Christmas, or at least the contemporary/superior version. (And considering that Jesus popped out of Mary’s untainted Semitic vagina, we gave the world the religious version too.) And I don’t mean to bash Hanukkah, which just seems cruel; it’s a lovable underdog: a minor holiday thrust into the spotlight because something had to compete with Christmas… it’s as if you suddenly found yourself in a boxing ring with Muhammad Ali-at his prime, not the Mohammed Ali who quivers uncontrollably-and the referee told you it was a fight to the death. You would shit your pants! So basically we should love Hanukkah like we love a child who has terminal cancer: it never asked for this! It never asked to suffer! How could a loving God let this happen?  This year, I will teach my girlfriend’s family how to light a menorah, which should be fun to try while I’m obliterated on Nana’s alcoholic apple cider. Perhaps they will enjoy my tribe’s festivities as much as I enjoy theirs… but somehow I doubt it. And that’s “ho ho ho”-kay with me.

Marty Beckerman is the author of Dumbocracy (September 2008).

Christmas: A Seasonal Reminder Of How Birthdays Are Dumb

The D’Var Torah For Christmas