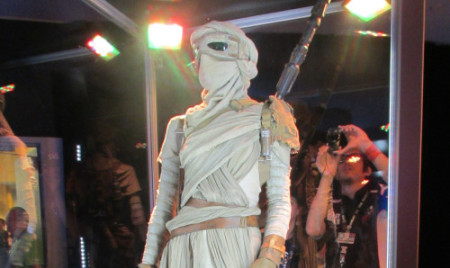 Purim is Wednesday night, and you don’t have a costume yet.  But don’t panic!  There’s still time to pull together a look for any speed or need.  Here are a few ideas:

Why not get political in the midst of the latest debate about female nudity as empowerment vs. exploitation? The costume would take very little effort; all you need is, say, a crown and the illusion of nudity everywhere else.  Maybe try a large covering posterboard that says: “This is my choice,” or, “Not for Achashverosh’s eyes.”

Is it a bit expected this year?  Maybe, but if you have the dough to drop, it shouldn’t be difficult to buy a readymade look from any costume shop. And Etsy, as it turns out, is full of baby BB-8 costumes.

For women who dress traditionally modestly, Leia’s original white dress is fully covering, and Rey’s look would take perhaps the most minor of tweaks to make it tznius as well. If you bring in one of Leia’s looks from the new film, you and your mom could even dress up together! Aw!

Besides, it is my personal headcanon that Rey is short for Reyzl.

Purim is about being edgy and subversive, but unfortunately also often displays a lack of effort (serious cosplay at Purim gets a side-eye; I know from experience).  So why not be blasphemous and lazy at the same time with a costume of the Prince of Peace™?

Let’s face it.  If you have long hair and a beard, you already look like him.  Just throw on a white robe and some sandals, and maybe carry some wine or matzah, and you’re good to go.

This one is a bit more detailed.  I dressed as an Aron Kodesh about five years ago, so this may partially be an excuse to brag on it.

My costume base was all black clothing, and on my body I wore a cardboard box that I decorated with marble-patterned contact paper and Hebrew letters like you might see on a real ark. 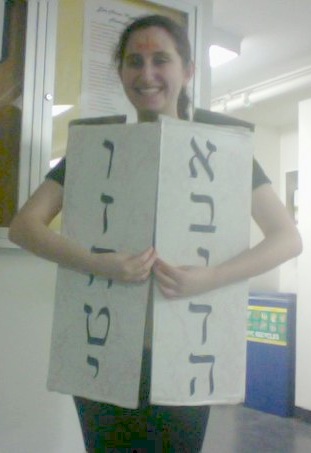 Then, the reveal. Open your box in the front to reveal a Torah on your torso. Mine was made out of paper, so it was lightweight and quick to make. I added a “Ner Tamid” in facepaint on my forehead, and voila! The ultimate Purim costume that works any year. 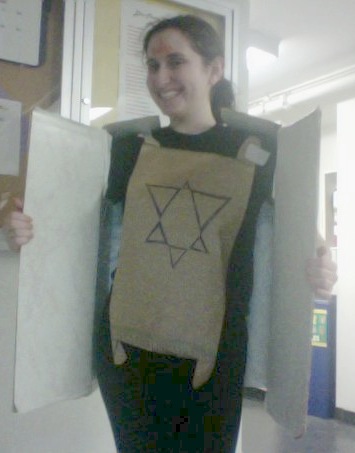 This one is easy.  Wear a suit, orange face-paint, an ugly wig, a triangle hat, and a cartoonish moustache. Wait for a fascist at the megillah reading to get into a fight with you. Before fists start to fly, I suggest you use the line:

“I’m the designated driver tonight.  Good thing I’m only drinking until I can no longer tell the difference between Haman and Trump.”

Feel free to tweet @Jewcy with any more ideas, or photos of any of these!  You still have a few days, so go go GO!