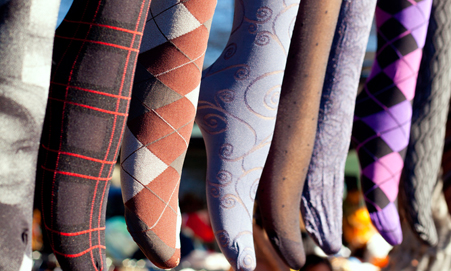 The BallaBuster is Dvora Meyers‘ biweekly column about all things Semitic and womany.

Earlier this month, Saige Hatch began a modesty crusade at her high school in Southern California. In response to Hatch’s newly-created modesty club, the city of South Pasadena set aside an entire week to encourage their young girls to resist pressure from popular culture and dress with “dignity.” While some of Hatch’s arguments are perfectly reasonable—the media does commodify women’s bodies in order to sell products—the movement’s agenda is decidedly not progressive. Unless, of course, it’s considered forward thinking to tie a woman’s dignity to her sartorial choices.

More problematic, however, than this 15-year-old’s well-intentioned attempt to get her classmates to cover up is the recent proliferation of blog posts written by adult women proudly defending their choice to show less skin as a feminist, progressive act—while also subtly putting down women who choose to show some cleavage and a little leg. In short, modesty apologia.

These types of essays and blog posts seemed fairly innocuous at first. A woman—sometimes Orthodox and sometimes not—testifies about how covering up makes her feel good about herself. Seems pretty positive, right?

But the problem with these essays is that the authors frequently don’t restrict themselves to their own subjective experiences. Rather, the writers pass judgment on how other women dress by insisting that covering up isn’t just optimal for her, as an individual, but also helps her earn respect. And here I thought people should judge me based on my ideas, actions, or even my taste in television shows.

Last month on XOJane, Chaya (who made waves a few months earlier with a blog post insisting that Hasidic women were more empowered and liberated than they’re portrayed to be) wrote a defense of modest dress that typifies a lot of the modesty apologia I find so troubling. In describing how modest dress made her feel better about her size, Chaya included this little gem: “Not only did I feel better about myself by keeping my body for me, but I also felt more beautiful.”

I am super happy that Chaya (and the other women she quotes) have found a mode of dress that makes them feel beautiful and confident. What I take issue with, however, is how she connects her decision to cover up with the ownership of her body. Naked or clothed, your body always belongs to you and never to anyone else. Someone else seeing your breasts doesn’t transfer ownership of them to that person.

Anyone who has been educated in the Orthodox community—at practically every level—knows that the rules of tznius, or modesty, are not bound up in liberation, no matter what sort of modern-day apologetics are used to explain the strictures, but in patriarchal control. Women are taught to cover up what rabbis, over generations, have deemed sexually titillating.

We’re told to think of the men on the street and how they perceive us, especially our Jewish brothers who have been commanded to think only about Torah 24/7. We’re taught that men cannot fully control their thoughts when they see us women, especially if we are immodestly dressed, and therefore the burden falls to us to manage our appearance and minimize their temptation.

During one of our innumerable lessons about feminine modesty, a high school classmate challenged the teacher, asking her why we have to modify our behavior simply because men cannot control their own thoughts and actions.

“You don’t know how hard that is for the boys. When they see a girl, all they can think about is sex,” the female teacher explained. To further illustrate her point, our teacher quoted Leviticus: In front of a blind person, do not place a stumbling block.

In this setup, males are blind and females are obstacles (literally, objects). A blind person can’t be held responsible for tripping over an obstacle, right? And if the object doesn’t want to become a stumbling block, it better get the hell out of dodge by not walking alone at night dressed like a slut.

My teacher certainly wasn’t condoning sexual violence, but in the way she explained the need for feminine modesty she was reaffirming and perpetuating the idea that men cannot be fully accountable when it comes to their behavior around women.

Equally troubling, Chaya’s essay contains dubious claims about how women’s dress illustrates their sense of self-worth. She quotes one woman who says this:

When a person is comfortable with her sexuality, she can much more easily dress modestly. When people have complexes about it, and are trying to prove themselves, and are not comfortable in their own skin, that’s when they have a problem covering up.

If you’ve ever been a teenage girl who felt fat and hid under baggy clothes, you might be tempted to call bullshit on this assertion. My most modestly-clothed years were also the years I was the most insecure about my body. I was wearing long skirts at the time, but I often wished for even more layers of sartorial camouflage.

I don’t fault tzniut rules for how I felt about my appearance. There were many forces at work, including my age. At my body hate nadir, I was in my teens, a particularly trying time for any girl, Orthodox or otherwise. During those years, self-consciousness is the rule, not the exception.

But as I’ve gotten older and more comfortable with my body and sexuality, I’ve dressed less modestly, not more. I especially favor backless shirts because they show off my muscular back—something I’ve worked hard for as a gymnast—and the scar from spinal surgery that I consider particularly badass. Our bodies are the keepers of our personal narratives and that scar, which runs from just above my bra line down to the base of my spine, is a visceral reminder of a major medical crisis and my ability to bounce back from it.

Of course, that isn’t what I’m thinking every time I don a backless top—sometimes I just think it looks hot. And that’s not a bad thing. It’s okay if a guy looks at me and finds me sexually attractive. I’m a full-fledged human being and my sexuality is a part of all that human goodness. God knows, I spend a good chunk of my subway commute scanning the car for hot guys to glance at surreptitiously while reading or listening to music. No one suggests men modify their dress or appearance to ward off the libidinous thoughts of women. If that were true, all guys would immediately grow soul patches.

Unlike the woman quoted in Chaya’s essay, who sees a woman dressed immodestly and instantly makes all sorts of assumptions her self-esteem, when I see a woman who is covered up, I don’t assume that she’s prudish or oppressed. Liberation isn’t a mode of dress. I feel liberated when I have an intense intellectual debate with a worthy opponent. I feel liberated when I dance, whether it’s in front of others or by myself. And I always feel fantastic when I dance in drop crotch leopard-print pants because they are awesome. I hope she feels as good in her clothing as I do in those ridiculous pants.

To a certain extent, I sympathize with the writers of modesty apologia. They, too, are bombarded by messages from advertisers about what constitutes feminine beauty. They know their way of dress does not conform to mainstream notions of sexual appeal. These blog posts are often their way of saying, “Guess what? I’m beautiful and look good, too!”

I heartily agree with that sentiment. You—in the long sleeves and skirts and hats and scarves—are beautiful and deserve to feel good about yourselves. But you are not more dignified or more deserving of respect than the women whose hemlines are higher or whose necklines plunge deeper. Respect and dignity should always be determined by our actions and the content of our character, not the contents of our closet.