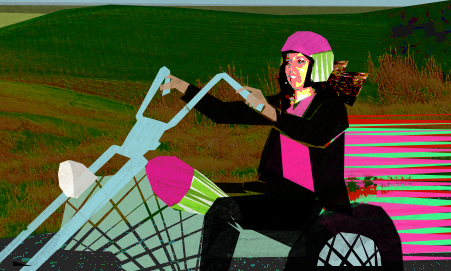 I’m about to turn 30—next week, in fact—and though I’ve been reassured by numerous friends who have already cleared this hurdle that nothing bad happens once you leave your twenties (and that in many cases, things actually get better), I’m still apprehensive. I’m not exactly enthused about getting older, perhaps because I’m not quite where I thought I would be at this age, both professionally and personally. And since much of my life revolves around fairly youthful passions like break dancing and gymnastics, I worry these pursuits might become incongruous with my new maturity. And let’s face it—while 30 doesn’t make you old, it makes you un-young. If you haven’t been already been called “precocious,” you probably never will, unless you somehow manage to make it on one of the New Yorker’s “best of” lists. (They consider anyone under 40 to still be young.)

But I do see potential upsides to turning 30, chief among them that I can no longer plausibly be a called “rebel.” I’m simply too old for that ish.

Throughout my twenties, as I moved away from Orthodox Judaism, I was branded a “rebel,” a label I grudgingly accepted even though it never really fit. New acquaintances, upon discovering my religious upbringing, would ask, “When did you rebel?” I’d grimace slightly at the label’s flexibility, this time appearing in verb form. My interrogator was imagining a more youthful version of me, cavorting with guys as I ate cheeseburgers on the Sabbath or went out dancing on Yom Kippur or something similarly extreme and sacrilegious.

But it wasn’t that way at all. It was gradual, methodical, and carefully thought out— the work of many years, not a wild summer. And nothing I did was extreme or particularly “in your face” or purposely contrarian. I wasn’t trying to get a rise out of anyone. (I was actually quite the rule-follower in high school.) Deciding to wear jeans or eating a salad with cheese or even getting a tattoo is all fairly banal stuff. It’s certainly not the stuff of movies or even reality television (unless it’s a show as boring as The Hills). In short, I was no James Dean.

Sisterhood contributor Chanel Dubofsky articulated my discomfort with the term “rebel in a piece for Role/Reboot where she examined the life lessons imparted to her by her mother and grandmother that she felt she had to undo. “There’s an incongruity, though, between the way we’re socialized to think about rebellion (something that a spoiled child does) and what unlearning the stuff we’re programmed to believe really looks like,” she wrote.

Unlearning what I had been programmed to believe has been the project of my teens and most of my twenties. It began in high school by simply challenging rabbis on subjects of Jewish import, especially as they pertained to the role of women. But even as I went back and forth with my teachers, I never really thought about acting on any of it. I mostly considered it an intellectual contest, one I wished to win because I’m gratuitously competitive. I loved it when I backed my teachers up against the wall with a powerful line of questioning, forcing them to resort to non-answers like citing a rabbinic scion, who was infallible by virtue of being a generation or two closer to the revelation at Sinai or something like that.

Of course, it didn’t end in debate—it never does. After spending years laying the intellectual groundwork for “rebellion” by studying source texts about modesty and women, I began to act on my knowledge. I started wearing pants once I realized that the halachic impediments to doing so were minimal at best. I did other things for less principled reasons (or at least without much textual support). At this rate, it took years to reach full-fledged nonobservance. I was the tortoise of going off the derech.

That’s why I bristle at being called a rebel, compared to bored kids thoughtlessly acting out. As Dubofsky observed, we have a tendency to view rebellion as juvenile, as something a child does to irk her parents or get a reaction from authority figures. And in the Orthodox community, this is definitely how the term is understood. “Rebellious” is used to describe any sort of adolescent misbehavior, especially as it pertains to violations of halacha (and almost always refers to breaches of modesty between the genders). But it’s also affixed to anyone who makes serious intellectual inquiries about Jewish law and worldview and questions the status quo. Nechamya Weberman’s victim was sent to him, in part, because she was considered rebellious for raising some serious theological questions in class.

The linking of these two forms of rebellion, whether by design or by accident, serves to delegitimize the more thoughtful version. (And, by the way, I have no problem with the “rebel without a cause” iteration. It’s probably an important developmental stage that I completely skipped.) A kid acting out is considered troublesome because he might entice others to the dark side, but his behavior is not viewed as a criticism of the status quo. “He’s just having fun,” or “He’s being influenced by the internet.” That rebel’s actions don’t constitute a major threat to the traditional worldview. But someone expressing cogent criticisms of the system is far more worrisome. Calling these people “rebellious,” with all the implied connotations of juvenile frivolity, is an attempt to neutralize their voices.

With or without a cause, I’m no longer a rebel. At 30, I just am. There are no more jeans to buy or colors to dye my hair or subways to take on Shabbos. I have done and will continue to do all of these things and more. But these days they’re simply part of how I live my life—not some means of being contrarian and sticking it to anyone else, be they family members or religious authorities.

And they never really were in the first place. Because I never was a rebel.

Pussy Hats Galore: A Dispatch from the Women’s March on Washington