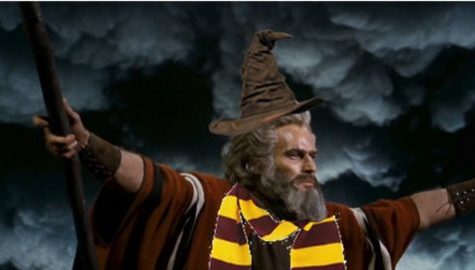 Myers-Briggs is too broad. Astrology is bunk. The only valid way of discretely sorting all people is into the houses of Harry Potter’s alma mater: Gryffindor, Ravenclaw, Hufflepuff, or Slytherin. And who hasn’t tried to sort not only all of their real-life acquaintances, but also fictional and/or literary characters outside of the Harry Potter franchise? So, why not folks from Jewish religious lore?

Here are some Biblical male characters, and you can read Part 2 about the women here. To keep us from going totally overboard, we’ll limit it to the Torah for now, and get to the rest of the Bible another time. (Update: Another time has occurred. Men. Women.)

Noah had to organize his family to spend ages working on a structure to God’s exact specifications, and to gather two of each animal. He had to stay laser-focused as the world around raced towards destruction. He had to employ lots of Ravenclaw skills there.

Abraham is a bit more complicated, even if you ignore Midrash and go strictly with stories that appear in the Torah. Here you have a man who can at times be cautious, or not protect those he loves (like when he pretends Sarah’s not his wife, or almost sacrifices his son). But, ultimately, Abraham is a man of clear vision and purpose, who sticks it through tough times because of a balance of a strong sense of self and, ultimately, a strong moral compass.

It’s a tough call, and maybe you can make an argument for Slytherin, but 1) Abraham’s argument with God on behalf of the people of Sodom and Gomorrah and 2) His bold actions led purely by blind faith make him a Gryffindor.

Isaac is the patriarch who seems the least proactive, but that’s not why he’s a Hufflepuff. He’s a simple man whose main concern is his family (playing favorites notwithstanding). He’s kind, trusting, dedicated to his father’s legacy and, well, nice. Which is more than you can say about a lot of men in the Bible.

Jacob is such a Slytherin. We could sit here coming up with examples all day: Getting Esau’s birthright, his personal and professional dealings with Laban, how even his bold move of wrestling with an angel ends with him using his upper-hand as negotiating leverage. For good or for bad, there’s only one house for him.

Joseph always managed to rise to the top based on his own wits and the relationships to powerful men around him, from his father to the Pharaoh. Sometimes this meant alienating those around him and getting into trouble, but he always got out again. The kid’s obviously a Slytherin.

Moses is the big one! It’s tempting to just stick him into Gryffindor because he radiates “protagonist,” and he does belong there, but it’s more complex than that. He goes through a lot (down to fear of public speaking) to gain the courage to become the leader he was destined to be. But he also shows early signs of boldness and, frankly, disregarding of consequences due to his passion for justice. Killing the Egyptian taskmaster, even though it eventually means exile? Such a Gryffindor thing to do.

Even once he was leader of the people, Moses often lost his temper, and was shockingly outspoken to both the masses and God despite his position also being highly political. Between his occasional lapses in judgment based on his temper coupled with a strong sense of right-and-wrong and his overcoming his fears Neville-Longbottom-style, yes. Moshe Rabbeinu is a Gryff.

Aaron was also a leader of the people, but not as brash as his brother. As the High Priest, he was focused on ritual, on organization, on logistics. Aaron had to be a stickler for detail (failure in this regard cost two of his sons their lives).

No doubt about it; the man’s a Ravenclaw.

Joshua is also pretty clear cut. Even before he was Moses’s successor, Joshua makes a name for himself in the Torah by being the vocal minority among the spies. He had some of the same qualities as Moses, most importantly, a strong sense of right and wrong.

Plus, it’s post-Torah, but tearing down walls? Quintessential Gryffindor.

Think that we’re wrong about any of these? WANT TO HAVE A FIGHT? Tweet us your own arguments.

Source Images for this SPECTACULAR Photoshop job via Vimeo, Pottermore, and EBay