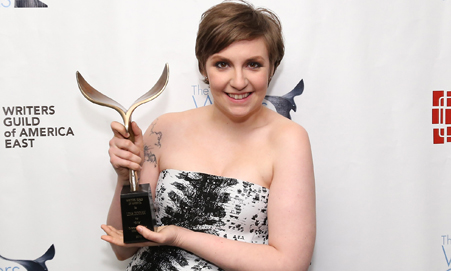 The purim ball was a fucking crazy time!

Lena Dunham gave the Purimspiel at last night’s Jewish Museum Purim Ball at the Park Avenue Armory. “Welcome to my bat mitzvah!” she said as she faced the well-heeled 800-person crowd in the massive party space filled with balloons streaming from the ceiling and sparkly decorations (in the name of journalism, I got a glitter tattoo).

The play was inspired by Eloise, the city child who lives in the Plaza, who Dunham called an “international, intergenerational symbol of just general precocity”—and naturally her favorite fictional character—and was written in the voice of a young Lena Dunham.

What started out as a potentially cloying narrative (“I am Lena, I am six. I am an artist’s child, and I live in New York City”) turned into a surprisingly revealing look at Dunham’s own understanding of her Jewishness—though Dunham interrupted herself early on as ‘grown-up Lena’ to insist parts about her parents had been somewhat fictionalized. She also added a very meta while-we-were-tweeting message: “If anything I say offends you, please don’t fucking tweet it because it’s going to really stress me out.”

Dunham was headlining the annual fundraising event as a favor to Museum Director Claudia Gould, a close friend of her mother, artist Laurie Simmons. Gould had asked Simmons if Dunham would participate in last year’s event, way back in a pre-Girls era, and Simmons wisely urged her to “give her a year.” But back to the Spiel:

“I suppose I’m Jewish, depending on which way you look at me. For instance, my mother is Jewish, and you are a Jew if your mother is a Jew—at least that’s what the Jews say,” Young Lena began. Her next line—”The Jews also say, ‘you’re too skinny, eat,'” got a hearty laugh from the crowd, who had just finished dining on short rib.

“The Jews don’t care who your dad is, unless he’s on the board of a major hospital,” Young Lena added, also to big laughs. (Tickets for the event, which this year honored artist James Rosenquist and AIG CEO Robert H. Benmosche, started at $1,250.)

Young Lena’s WASP father (a “White Angry Saxophone Protestant”) would go to synagogue but not wear a yarmulke—it looked like a bird pooped on his head, he said. Still, Young Lena learned early on about the hazards of Jewish hair and developed a very negative opinion of parents who sent their kids to camp (Camp Ramah got its second Dunham mention—the first was during Season 1 of Girls).

Then Young Lena assembled a group onstage to play the different roles in the Purim story—her mother played the principled Vashti, her doctor played King Ahashuerus, and boyfriend Jack Antonoff’s sister Rachel played Esther. The story was told quickly, a less dramatic version of a Rugrats holiday special, and ended with—spoiler alert—Esther convincing her husband Ahasuerus (even though we’re warned that Young Lena’s doctor is way too old to actually marry Rachel) to save all the Jews from Haman.

The whole thing was sweeter than what we’ve come to expect from Dunham, but just as sharp. She also did drop the F-bomb at a fundraiser for a Jewish institution, so there’s that.

Dunham spent the rest of the evening being politely accosted by girls in high heels and sparkly dresses. I was barred by a publicist before I could ask Grown-Up Lena the age-old question: was she an Esther or a Vashti?

Previously: Lena Dunham to Direct and Star in Her Own Purim Spiel
You Can Buy a Ring With Lena Dunham’s Face on it on Etsy