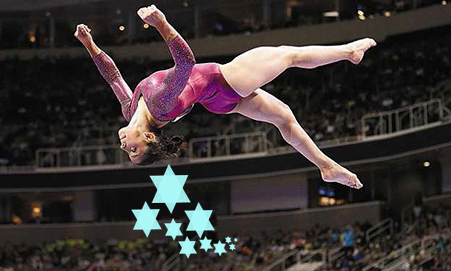 Almost no one is happier than I am that Alexandra Raisman won the Olympic gold medal on the floor exercise at the just-finished London Olympics. I’ve been a fan of the teenage American gymnast since 2010, when she first appeared on television at the American Cup. Virtually unknown as a junior athlete, she burst onto the senior scene and placed second in the all-around and has made very few missteps since then.

But only now is the Jewish world catching onto Raisman’s tumbling prowess and general awesomeness. Not only are they expressing tribal/ethnic pride, which is totally natural, they’re trying to figure out how to leverage her Jewishness, athleticism, and popularity in service of that favorite watchword, “engagement.”

In an op-ed in the Jerusalem Post, Abe Novick sketches out his hopes for Raisman’s upcoming trip to the Holy Land as a tool for connecting young Jews to their religious identity and the state of Israel. He writes:

While meeting and touring Israel and while fielding offers from marketers willing to shower millions upon her, Israel and Jewish organizations should also consider the larger implications of having someone like Aly as an inspiration to help bridge a divide that American youth have toward their Jewish identities as well as their feelings about Israel. Moreover, Aly could be a symbol and an embodiment of Jewish values to youth of all races and backgrounds.

That’s a lot of pressure to foist on the shoulders of a teenager. I have no doubt that Raisman believes what she said in support of a moment of silence for the murdered Munich athletes. Still, it’s a bit of leap to now turn Raisman into some sort of Jewish role model charged with being successful where millions of dollars and thousands of programs have only had uneven results at best: engaging unaffiliated Jewish youth.

Yes, the answer is to use everything and everyone popular and labeled as “Jewish” to get the young kids engaged. I imagine the same idea went through everyone’s heads back in 1996 when Jewish gymnast Kerri Strug left the Olympic Games as arguably an even bigger celebrity than Raisman. In one of the most dramatic moments in Olympic history, she vaulted on a sprained ankle to ensure the gold for the American women, the first ever team title for the U.S.

Did the Jewish community conspire to turn Strug into a tool for Jewish engagement? I don’t know. I was 13 at the time and all I cared about was watching my tapes of the competition until they warped. (I even went to a stop on the post-Olympic tour in 1996 and bought a t-shirt with a picture of the team on it that I still have never worn out of fear of staining it.)

But even if they had so planned, it clearly didn’t take. Strug, while a beloved past Olympian, went on to live a largely private life. She certainly didn’t become a Jewish figurehead, doing flips to convince the kids that Judaism is cool. (Also, since when is gymnastics even cool? I know for a fact that it isn’t. My entire life has been an exercise in trying to convince my friends and family to care about the sport. I’ve mostly failed at this.)

A lot of significance has been attached to Raisman’s choice of “Hava Nagila” as a floor exercise soundtrack. She started competing with this particular floor exercise over a year ago, at a domestic qualifying meet. Shortly thereafter, I interviewed her about the song selection and though she expressed religious pride in performing to it, there was no mention of the 40th anniversary of the Munich massacre.

In fact, it was Martha Karolyi, the Romanian born national team coordinator, who reportedly suggested using Jewish wedding music, according to Raisman’s mother, Lynn. It was Lynn who found the version with whistling that her daughter used to win the Olympic gold medal. While Karolyi might’ve thought it would be nice to have something connected to Raisman’s own heritage, her top priority was probably finding a piece of music that would get Raisman and the crowd engaged. Folk music is ideal for this purpose. (There have been at least four other elite gymnasts who have used Hava Nagila in elite competition prior to Raisman. As far as I know, none of the others are Jewish.)

As an ardent gymnastics fan and blogger, I’d support turning Raisman into some kind of Jewish figurehead if, in turn, the Jewish world had to start caring about my beloved sport year round, instead of once every four years. It’s a two way street, folks. This means that her next competition (should she decide to compete after this year) would have to be covered by all the Jewish media outlets even if she changes her floor music—which she undoubtedly will since she’s been using “Hava” for two competitive seasons now. If we want her time and unwavering support, it’s time we gave her ours. (I’d like to nominate myself as official Jewish media correspondent to all gymnastics meets so we don’t miss an angle and opportunity for “engagement.”)

I’m not saying that Raisman wouldn’t make an excellent Jewish ambassador, but let’s pause for a second before we make her Queen of the Heebs. We shouldn’t be reading too deeply into song selection and a few comments. She is only eighteen, after all. Like anyone that age, she is still finding her voice and opinion on a whole range of issues, Judaism included. I don’t think we’d want her endorsing Judaism and Israel as she would a product line.

But if she does agree to a Jewish-themed advertisement, please let it be like the one 2008 Olympic champion Shawn Johnson made for Ortega. Raisman can be to latkes what Johnson was to tacos.