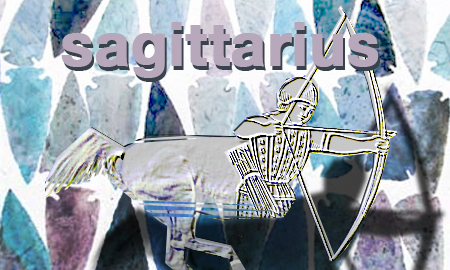 The archer always hits his mark. Sagittarius was the tribal symbol of Ephraim and Manasseh. The sign was also associated with Joash, king of Israel, shooting arrows out of the window eastward at the command of the dying Elisha.

Your astrological symbol is the Centaur, half-man and half-horse, exemplifying humanity’s dual nature. The archetypal explorer, Sagittarius is the sign of the bachelor: you are both a seducer and an upholder of wisdom and justice. Your mutable nature highlights the tension between the civilized human and the instinctive animal. Sagitarrians are often said to be tactless. More likely, however, like the archer, you know exactly what to target when you are angered—you have the ability to sense others’ weak spots

You see the world for what it is and want to explore it to the farthest ends. Most comfortable when you are doing things on your own, you have the courage of your convictions by your side and are adept at explaining anything with frankness and candor. Very analytical and patient, you make an excellent teacher.

The high social energy of the full moon lunar eclipse in Gemini, November 28 lights up your need to share your philosophies, while the new moon in Capricorn on December 13 encourages you to apply them to your own life. These energies are great for gaining perspective on the past. Broaden your horizons, and actualize the changes you’ve resolved to put in action. Az me zucht, gefint men: If you seek, you will find.

CAPRICORN (DECEMBER 21-JANUARY 20): Action-hero Mars will be in your sign from November 16 to December 25, encouraging you to gantseh k’nocker (put it all on the table). While these energies direct you toward things to come, keep an eye on the past: a historical artifact or philosophy may be the key to your future.

AQUARIUS (JANUARY 21-FEBRUARY 20): With your ruling sign Uranus turning direct on December 13, you have the opportunity to actualize the psychological exploration you’ve been doing since the summer. With the big pay off for all of your intuitive inner-changes around the corner, don’t be afraid to rock the boat!

PISCES (FEBRUARY 21-MARCH 20): Life seems to have been putting you through one trial after another, but how you come out of the wringer is up to you. Your ruling planet Neptune is finally moving direct, which should help you apply the lessons you’ve learned. Try not to feel farfaln (hopeless)—but remember: if it ain’t broke, don’t fix it.

ARIES (MARCH 21-APRIL 20): Your ruling planet Mars will be in earthy, practical Capricorn until the end of December. This gives you a chance to focus on your career and other worldly tasks, you gantseh makher (big shot). However, something may still be stuck in your craw. Before you get all broygis (pissed off), consider any minor adjustments you’ve been ignoring—maybe you need to take a page from Dr. Ruth and pay more attention to your love life.

TAURUS (APRIL 21- MAY 20): Your ruling planet Sweet Venus is in the intense sign Scorpio. You eingeshparht bulls may be fools for love, but staying grounded can help you combat the intensity. Keeping busy and listening to your heart is the first step to sharing it with someone else.

GEMINI (MAY 21- JUNE 20): Even if it’s true that Az men hot nit tsu entfern, muz men farshveign—If one has nothing to say, it’s best to shut up—you Geminis resent being told to bite your tongue. The Mercury retrograde was rough on you, but now that your ruling planet will be moving direct for the rest of 2012, your communications will ease. Use your powers of persuasion and your rich imagination more subtly: it’ll give you an air of mystery.

CANCER (JUNE 21-JULY 20): The Lunar eclipse on November 28th in social butterfly sign Gemini gives you cause to criticize your fun-loving astrological neighbors, priding yourself on the fact that you don’t suffer fools gladly. But it might do you some good to take a look in the mirror before throwing any more stones. Before you start schvitzing, take a chill pill and focus that constructive criticism inward.

LEO (JULY 21-AUGUST 20): What gives light must also endure burning, and your bright Leo sun has burned you more than you’d like to admit. It may seem like you’ve been fighting a losing battle, but maintain some balance, you volatile beasts! The total eclipse of the heart on November 28 will give you a much needed boost.

VIRGO (AUGUST 21-SEPTEMBER 20): With your ruling planet Mercury mercifully direct for the remainder of 2012, channel your energy into a more creative direction. Profound mood changes may coincide with the Full Moon eclipse in Gemini. Ignore the impulse to give into the plotka-macher sitting on your left shoulder. Instead, let the socially astute maiden on your right guide you.

LIBRA (SEPTEMBER 21-OCTOBER 20): You may be swamped with responsibilities, misinformation, and money problems: oy gevalt! It may be difficult, since you Libras tend to be pisk malukheh—all talk and no action—but try to solve these problems on the New Moon on December 13. If you commit to finding a solution, it should pay off by the end of the year.

SCORPIO (OCTOBER 21-NOVEMBER 20): A ligner darf hoben a guten zechron: A liar should have a good memory. You not only play your cards close to your chest, you also play for keeps. With Lovely Venus is in your sign until December 15, you may experience an intense yearning for what’s far away. Look beneath the surface of things to determine what you really want.

Emma Morris is a librarian and writer living in Chicago. She blogs about astrology here.