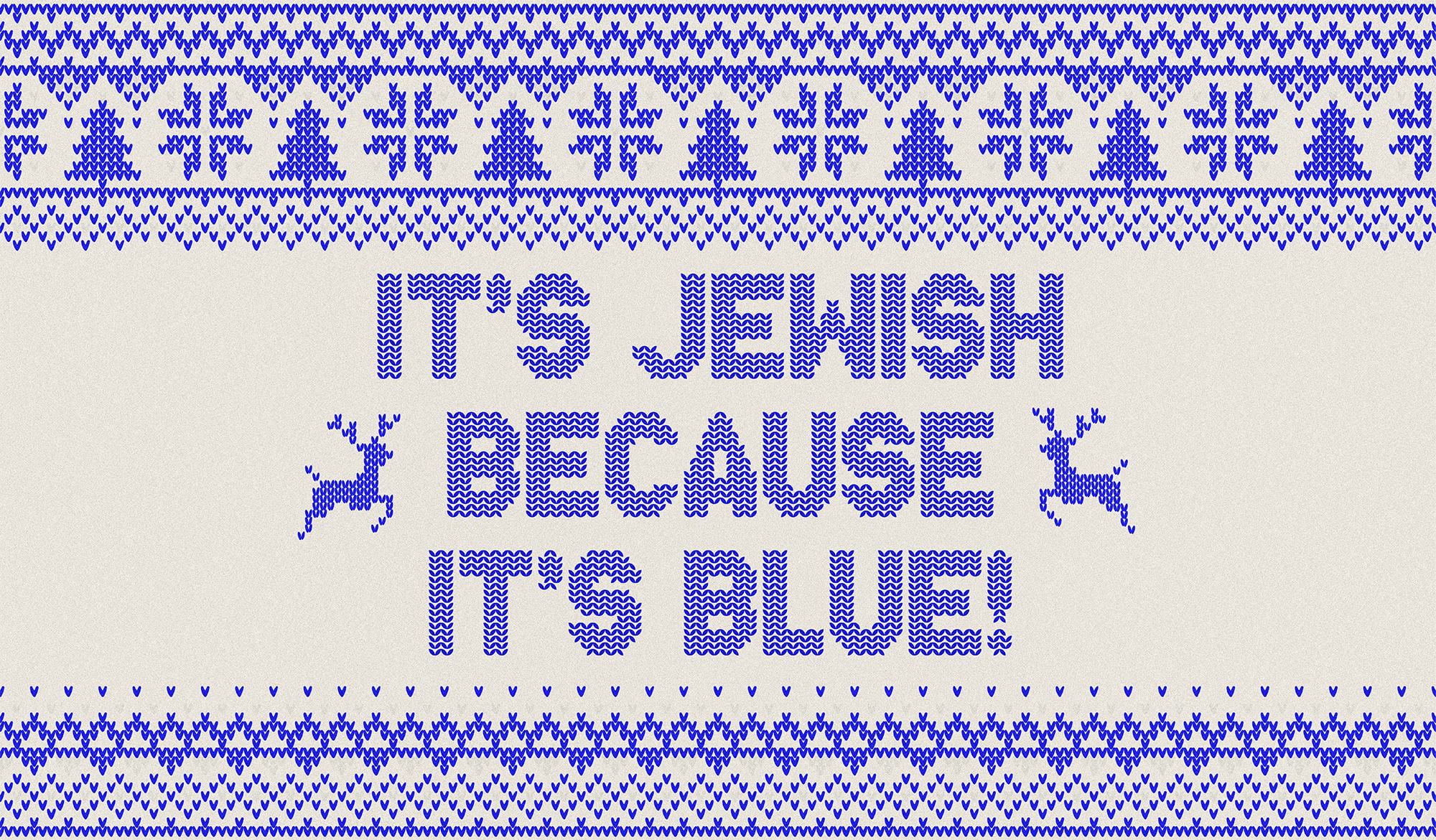 “But how will I recognize the token Jewish character in [insert any sitcom here] whose Jewishness will never be explicitly shown or mentioned, with the exception of wearing a blue sweater in the Christmas episode!?!”

I get it. In a sea of red and green, you want to loudly represent the blue. What’s the harm in that? Be proud! That’s not my concern.

But why the hell are we still marketing Judaism as quirky Christianity?

Over a century ago, a bunch of American rabbis came together in a conference called The Pittsburgh Platform and long story short, they decided that Jews were no longer a nation, but a religious community like any other–specifically Christians and Muslims.

It was an attempt to modernize Judaism and allow American Jews to assimilate into the fabric of the United States. This idea had a lot of influence to say the least, and it still lingers in the way many of my American Jewish brethren see themselves today.

But if you have read any of the scathing infographics from the rightfully angry Jews in your Instagram circles, you know this isn’t true. We know that Judaism is not just a religion but also an ethnicity, that a rejection of Jewish nationhood is not reflective of the relationship Jews from around the world share, and most obviously, that our belief system is completely different from those of Christianity and Islam. We all agree Judeo-Christian is not a thing at this point, right?

Look, I don’t blame these rabbis. Wrong as they were, they were just reacting to a society which has always been reluctant to accept us. They were trying to help Judaism survive, and surely non-Jews not caring enough to understand us played a huge part too. But… one thing leads to another, and thinking of Judaism as a kooky Christianity most certainly paved the way for Hanukkah as “Blue Christmas.”

If Christmas is Christians’ most important holiday, then Hanukkah, which falls around the same time, must be ours. It must be a culmination of all things Jew-ey and Jewish-ey, with the oys and the veys and the gimel, dalet, heis. Add a dash of gentile-steered corporate crazy, some good ol’ Jewish overcompensation, and BAM! We’ve got Hanukkah gnomes, Magen David Santa hats, and of course, the ever-dazzling Hanukkah sweater.

And listen, Hanukkah sweaters, in theory, are probably the least problematic product of this whole balagan. (Don’t even get me started on the Hanukkah Bush.) Truth is, a lot of our culture and traditions are born out of being the other, some even inspired by the larger cultures we live within. And that’s okay! Hanukkah gifts became a thing just so we wouldn’t be jealous of Christian children, and you won’t see me complaining. The problem is that these products are made from a complete misunderstanding of who we are as a people and what we are celebrating. So, we’re stuck with a hoard of with slogans like:

Oy to the World,

Deck the Halls with Matzo Balls,

And even the raunchy, You Little Horah.

First of all, I am Sephardic so if I’m decking the halls with anything it’s going to be sambousaks. And secondly, notice how these have absolutely nothing to do with Hanukkah whatsoever?! They’re just goyishe holiday phrases with a Jew-ey pun jammed in. The others are just cliché Yiddishisms on knitwear, usually accompanied by illustrations of the most generic and recognizable Jewish symbols like an Orthodox man with peyos (yikes), stars of David, or the most Jewishiest of all… a reindeer with menorah antlers? What the hell?

Hanukkah sweaters are so ridiculous that they’re almost funny except… a lot of Jewish people buy them and wear them.

Like I said before, I get it. Being proudly, outwardly Jewish in a predominantly non-Jewish society is hard, especially when others don’t fully understand our culture. But instead of dumbing down our traditions and our identity to nothing, can’t we stand out in a way that’s authentic to our two-thousand-year-old-peoplehood? And at the bare minimum, in a way that even peripherally relates to what we are celebrating?

And honestly, if you want to get some Hanukkah-wear, go for it. Who am I to stop you? (Personally, I’d go with a “I like you a latke” or “spin my dreidel” situation.) But let’s stop minimizing ourselves for the non-Jewish world. Let’s remember who we are. We are more than just a piece blue fabric and comic relief in a TV show.

And most importantly, let’s remember that Hanukkah is about a violent revolt against a kingdom who wanted to abolish Jewish culture–not “the light” and “the dark” and “Tikkun Olam.” It was a war against colonizers who tried to ravage our temple and take our property–in no other than Zion, by the way… Hanukkah, chaverim and chaverot, is as anti-assimilation as it gets.

Put that on a sweater.