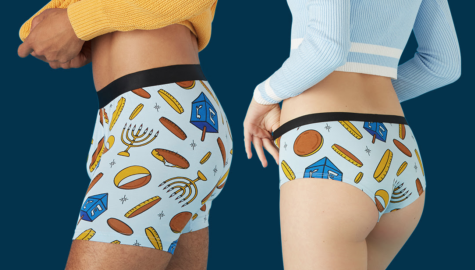 Every year, corporate American remembers amongst the jingle bells and mistletoe that Jews, too, are a consumer market. And so, out they trot with Chanukah merchandise, like some Prometheus of the holiday spirit, bestowing upon American Jewry the gift of ugly sweaters of our own (and, surprise surprise, lots of branded socks).

At what point do we appreciate these seasonal crumbs, and at what point do we turn it into an opportunity to kvetch? Is it nice to be included at all, or do the generic blue decorations smack of insincerity? Isn’t there anyone who knows what Chanukah is all about?

If it’s not worth engaging in debates about the commercialization of Chanukah (the very fact that we give gifts for it mean that ship sailed long ago), we can still nitpick about one thing: Merchandizing accuracy.

A Christmas tree doesn’t need to look like anything; there’s no real right or wrong with the way to depict it on your gay apparel. Chanukah, on the other hand, is full of technicalities, some of which are confusing to even regular practitioners (wait, do I light the Menorah starting from my right or the window’s right?). And so, if we take a closer look at seasonal Jewish products, you can start to notice some pretty mistakes, big and small.

For example, Target came out with a Chanukah-print dress and jumper this year— but if you look closely, you’ll notice that the letters on the dreidl seem to be going left to right; the hey and the gimel spots are reversed. Or more egregiously, a Bonton sweater (currently, somehow, out of stock) depicts a Chanukah menorah as having seven branches, when it has nine… Perhaps they’re simply making a sophisticated reference to the original menorah from the origins of the holiday. (It’s a particular fad— JCrew socks did the same thing— though they generically call them “holiday candle socks.”)

And so, it seems pretty obvious that these retailers create these pieces without talking to an actual Jew, right? Actually, not necessarily.

If you’ve ever listened to a podcast, you’ve heard an ad for MeUndies— their underwear is hella soft, they have a subscription service for a monthly pair, they make fun prints, etc. And this year, in time for the holiday season, they have released a limited edition print (available for multiple genders, in several different styles): “Joy Vey.”

OK, let’s play a fun game and figure out the two major mistakes on this pair of Jewish underwear: 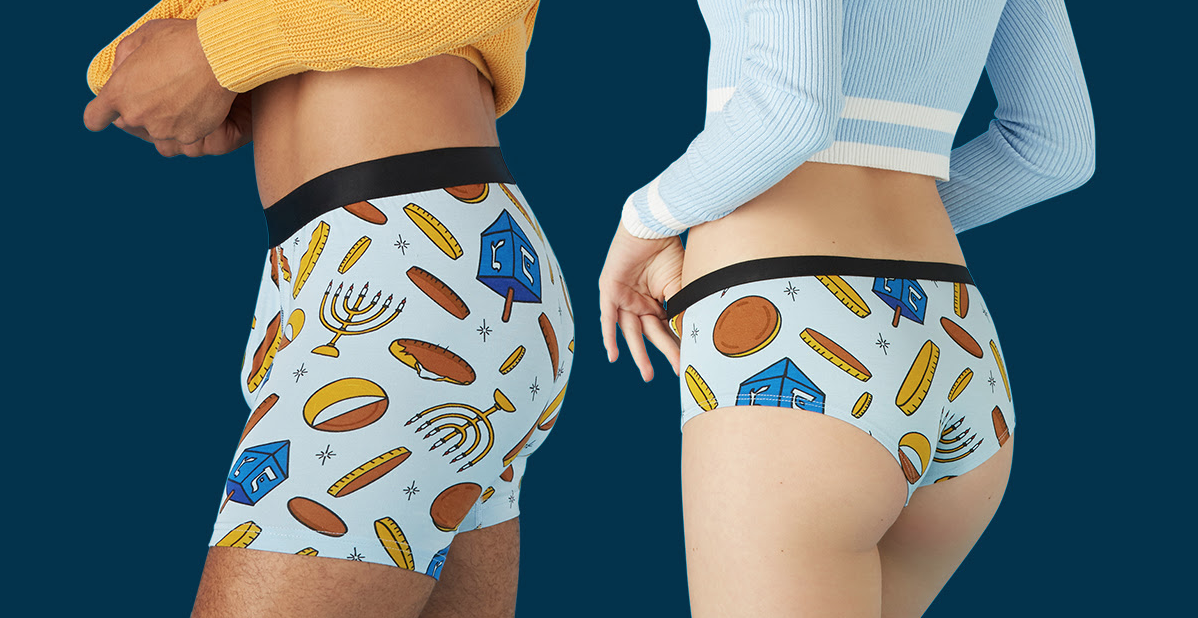 You find them? The first is that yes, once again, the chanukiyah has only seven branches. The other is the dreidl. It’s not that it’s upside-down— it’s the fact that it has a Bet on it. Now, some dreidls have a Pey where others have a Shin depending where in the world you are, but no dreidls ever have the Hebrew letter Bet.

MeUndies kindly responded to Jewcy for comment, and admitted— they have latke on their face.

“This pair was designed by our creative director, Tyler King, who is indeed Jewish,” said a company rep. “But it doesn’t stop there. Our founder, VP of marketing, head of brand marketing, and CEO are all Jewish and were so excited to release this pair. We felt that Hanukkah has always been underrepresented during the holidays in the U.S., and we hoped this would be a nod to what we always wished for growing up.”

So… what went wrong?

“In our feverish excitement around releasing a print with a Hanukkah theme, we overlooked some key flaws to the design… Tyler, our designer, has told us his family will remind him for the rest of his life about the time he goofed on this Hanukkah print. We pride ourselves on being an inclusive brand, but human error will creep in every so often. These underwear will now live on as a collector’s item and a representation of the time we messed up something that was so close to our hearts.”

And so, what’s the lesson here? An argument for stronger Jewish education to prevent such mistakes? That Jewish-themed apparel needs a mashgiach? That we should all just stop complaining and chill out? (No, definitely not that last one.)

Certainly, it reminds us that it’s not just misguided Gentiles creating off-kilter Chanukah goods. And if Jews can’t muddle our own traditions, who can?