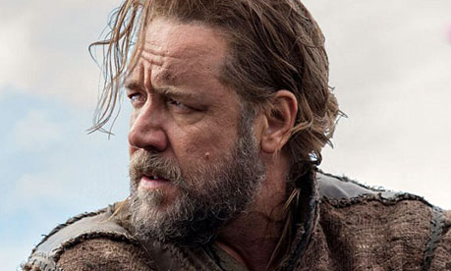 Upon hearing the biblical casting news out of Hollywood this summer that Russell Crowe was cast as the title character in Darren Aronofsky’s epic film Noah, I immediately thought that Crowe was a great choice. His skill set and experience—both in B.C. and A.D.—qualify him to build the ark on the big screen. However, after seeing a picture of Crowe in character, I started to question whether he was the right choice visually.

I’m skeptical because Aronofsky’s vision of Noah doesn’t really match with my vision of Noah, shaped over years of hearing and reading the story of the biblical ark builder. The first images of Crowe in character reveal a middle-aged Noah: a man of thick stock who’s a bit muscular and rugged, with a beard that’s not quite biblical length. (I define biblical length as a very long beard. I know that’s vague, but it makes sense to me.) My vision of Noah is a much older man, lean with a long white flowing beard, dressed in a white tunic or a cloak-like outfit (I think it may have been more of a brown color when I was younger.)

In Aronofsky’s defense, it’s possible that as the film progresses, Crowe ages and develops into the Noah I’ve always imagined. Another possibility is that my vision is just that: my own conception of a biblical figure. Better yet, maybe Aronofsky’s characterization will ultimately change how I picture Noah. But for now, something just seems off.

If Aronofsky and I have such a major difference in our visions of Noah, what does it say about the personalization of Biblical figures on a wider scale? What roles do our Jewish upbringings and imaginations, as well as outside forces, have in developing and influencing these images? My biblical visuals are rooted in a combination of Hebrew School lessons, d’var Torah passages, and good old-fashioned daydreaming. I remember being a kid listening to the stories told from the bimah and the front of the Hebrew School classroom. As the details of the story were read aloud, I would begin to visualize everything: I would picture the people, in varying degrees of detail, and the settings.

I distinctly remember envisioning Abraham when I was younger. I remember picturing him breaking his father’s idols as a skinny, average-height boy. Older Abraham has the ultimate biblical beard, though I’m not sure whether it’s salt-and-peppered or completely white. I think I usually give him a white beard, but I can’t remember for sure. He wears long tribal garb, and as of press time I still can’t picture his face. He’s more of a figure seen from behind or the side.

When it comes to Moses, there’s no need for imagination. Hollywood gave me Moses in the form of Charlton Heston in The Ten Commandments. There is no other Moses. When I hear the name Moses, I see Heston. His face, beard, build, garb, even his voice are as they should be. But are they as they should be because I have fully accepted and internalized director Cecil B. DeMille’s image of Moses? Or is there a chance that his vision supports a preexisting notion of Moses in my head? It’s so ingrained in my consciousness at this point that I can’t know for sure.

Since Hollywood has clearly had a profound impact on my conception of Moses, I wonder if Aronofsky’s blockbuster will have a similar effect with Noah. Will this Hollywood depiction reinforce aspects of my Noah or completely replace him? Moses was offered to me when I was young–DeMille’s film, released in 1956, had already become a classic by the time I was born—but I’ve had twenty-plus years of picturing some form of a Noah without any big screen influence. If anything, Hollywood only confirmed that vision with Steve Carrell’s Noah-esque character in 2007’s less-than-stellar Evan Almighty.

I’ll have to wait until Noah is released in 2014 to see if Aronofsky can replace my vision of this particular biblical figure. Perhaps when I see Crowe, staff in hand, leading the animals two by two into the ark, everything will change. There’s a chance that Crowe could even become my Noah. But I’m pretty sure that Crowe won’t ever be my Noah the way Heston is my Moses.

Susan Cohen is a freelance writer. She is a regular contributor to Gluten-Free Living and her work has appeared on 6sqft, Long Island Pulse, The Forward's The Sisterhood, ModernFarmer.com, and Tablet's The Scroll.