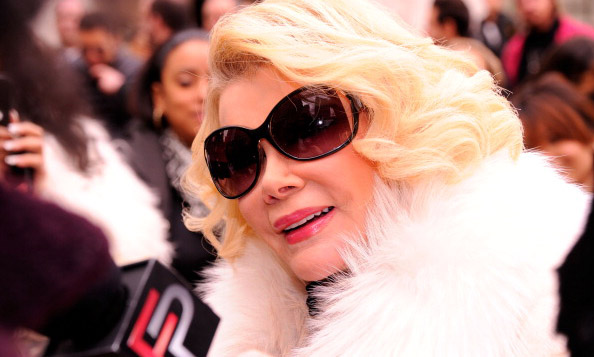 Say what you will about the iconic 80-year-old comedian and her perpetually yanked and stretched face, but no one can give-and-take quite like Joan Rivers.

Jennifer Lawrence, who has acquired the epithet, “America’s Sweetheart,” started beef with Rivers in November when she made a comment about the vapidity of Rivers’ celeb-judging show on E!, Fashion Police–something most actresses wouldn’t do, for fear of being skinned like a sheep by Rivers’ timely and hilarious insults.

Jennifer said: “There are shows like the Fashion Police that are just showing these generations of young people to judge people based on all the wrong values and that it’s OK to point at people and call them ugly or fat.”

Rivers already responded to that Fashion Police diss, but in true Joan fashion, she can’t stop, and she won’t stop (can’t you see it’s Joan who owns the night?). Joan continued to the New York Post:

“I love that she’s telling everyone how wrong it is to worry about retouching and body image, and meanwhile, she has been touched up more than a choir boy at the Vatican. Look at her posters. She doesn’t have a nose, she has two holes. She just has to learn, don’t talk if you’re doing it.”

“My New Year’s resolution is [ensuring] Jennifer Lawrence grows up and realizes how lucky she is and calms down.”

However, Joan still showed some love for J-Law’s acting skills, because they are of course, stupendous: “She’s an amazing actress, she’s the next Meryl Streep.”

It’s just like…. SO many things about America’s beauty culture are wrong. To call out Rivs’ pride and joy (the show), among all things, is just silly. Regardless, Jennifer is busy being America’s favorite actress, so I guess she ain’t got time for Joan either.