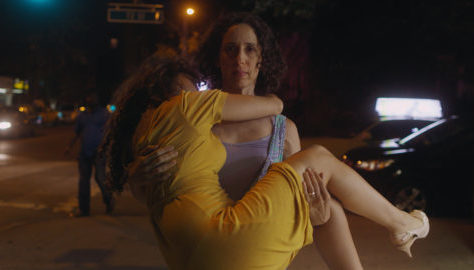 Looking for a truly fresh perspective on time travel? Check out Tomorrow Ever After, a new film about a woman named Shaina who is accidentally sent hundreds of years back in time to the present, where she can’t understand why people aren’t warm to one another. Jewcy had the chance to speak with Israeli-American filmmaker (and its star) Ela Thier to discuss the interesting journey she took to arrive at this film.

Jewcy: Where did the idea for your film originate?

Somewhere in my head, I imagine. I get asked that and I’m not quite sure. I vaguely remember I was working on another script that wasn’t going anywhere. When I’m blocked, I just start scribbling and doing something I’m never going to take seriously. This was one of those things. I started scribbling and a whole movie just came out. I wrote it in a few days and I fell in love with it. I knew this was the movie I had to make.

Jewcy: There are so few elements of society that still exist in Shaina’s time, but she does confirm that she’s Jewish. What is it about Judaism that helped it survive all of these centuries?

I’ll have to think about that. I think what mattered to me more was to make that point alone – that Judaism survives. It was like a shout-out to my people that we’re not going anywhere. I think we’ll be around for the same reason that we’ve been around, that our culture is not centered around something material. It’s about how we think about the world.

Jewcy: I read that you studied in an Orthodox seminary and that you try to embody the spirit of Tikkun Olam. How do you think your Jewish upbringing influenced this film?

Probably in very subtle and profound ways that I may not even be aware of. I do think that Tikkun Olam, the responsibility and passion for it, is in our bones. It’s passed on to us, and I’m glad it is. I don’t think it’s possible to be a Jewish artist and not be influenced by that. I very much believe artists and filmmakers are the architects of our society. We shape the way people think. It’s a tremendous power and we have a responsibility to use that well. When I make a movie, I think, what kind of movie would I want our children to see? What kind of movie would move us toward the society that I want to see us build?

Jewcy: How did you decide which things and social cues Shaina would understand, like her desire to give hugs, and which ones she wouldn’t, like the fact that one of the first people she meets only speaks to her because he’s trying to mug her?

The things that make sense to her are the things that we’ll still see in the future that I describe, where people are more human with each other. Things that don’t make sense are inhuman. She would understand relationships or friendships but she wouldn’t understand an impersonal receptionist where there’s no human connection.

Jewcy: What was the most challenging part of making this film?

The most challenging thing about it is the most challenging thing about making any film. As an artist, the harder you work, the less money you have. With that comes a sense of insecurity. It’s very hard to tell when you’re in the midst of working that what you’re doing is any good or that anyone will get to see it. You’re sort of walking upstream.

Jewcy: Did you draw any inspiration from existing films about time travel or the future?

I am not a science fiction person. Someone told me that the best science fiction writers are the ones who don’t read or watch science fiction because we’re most interested in the story and characters. (Of course, I will be seeing the sequel to Guardians of the Galaxy.)

Jewcy: No one auditioned for this film. Can you explain that process?

Writing can be one of the tougher parts of filmmaking because it’s something you do alone. I discovered a little trick to it. If you write for people you know, you’re less alone. I had a blast writing for actors that I’ve worked with and I believe in. Every single character was written for someone I knew. I used their actual names up until the moment that I sent it to them for the table read. It really brought it to life, and I could see the movie. I was laughing out loud at times because I could picture that person in it. It made writing it a much richer experience. I am in this dilemma as a filmmaker, however, since it’s hard to develop and distribute a film where you don’t have known actors.

Jewcy: Was the casting of all immigrants in the film purposeful?

I’m very proud of the fact that all of my films have very diverse casts. It’s not that I set out to do that, but rather that it’s a reflection of what my life looks like. I set out to bring diversity into my actual life, and these are the people that I have relationships to and that I’m close to. That does need to happen by decision. Our society, even though it’s not in the bylaws, is very segregated. If you don’t step out of your comfort zone and get to know people you might not have felt encouraged to get to know, you’re missing out. If I don’t do something about that, I do end up in a white bubble where I’m shut out from the majority of the world population. This was more about the fact that in my life I stepped out of my white middle class comfort zone. What you see in the movie is the reward you get from that.

Jewcy: Can you talk about the Independent Film School?

Almost everyone in the film behind and in front of the camera is someone I met at my workshop there. I make a point of holding diverse classes. The Independent Film School came to be by accident. I needed a job. I interviewed for a dog-walking job and didn’t get it. I was part of a writing group and people kept coming to me for input, and at some point I realized I was spending so much time helping writers that I should charge for it. Eight people showed up for my first screenwriting class, and ten years later it’s been thousands and thousands of people. It really came to life, and it started out as a writing workshop, then evolved as I started to produce and direct.

The school is an organic outgrowth of what I do as a filmmaker. It was the greatest accident of all time. The people that I’ve gotten to know and work with in my workshop has built a community that now supports my work and theirs. One of our guiding principles is that we reject the idea that competition makes us better artists. Supporting each other does that. One of the things I got to learn through teaching is that it’s really everyone’s aspiration to have a positive impact as an artist. My vision is not just for me to make films that have a positive impact but to be part of a whole community of artists that share that vision to help the world move in that direction.

Jewcy: What’s next for you?

I am a prolific writer, so there’s a very hefty pile of unproduced scripts in my office, and some of them are actually really fabulous. Some of them I wouldn’t produce, but some of them I would if I could. I have to be strategic about what I choose to work on. If you’ve seen this film, you know that it’s designed for a sequel. I’ve started writing it for some of the same characters. I have to figure out what to do so I can continue to derive the benefits of working with people I believe in who are extremely talented and figure out how to give the project traction. It’s at least a trilogy, but possibly more than that. The premise of this story really lends itself to endless possibilities. I could probably write these storylines for the rest of my life. I don’t know that I will, but I probably could.

Tomorrow Ever After opens this Friday, May 5th, in New York and Los Angeles.

Image: Ela Thier from Tomorrow Ever After