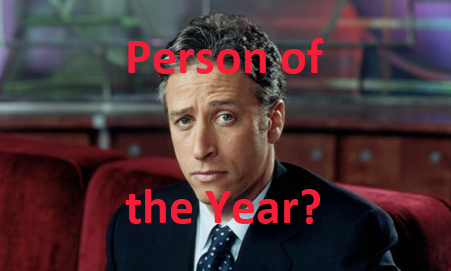 Being named TIME Person of the Year is kind of a big deal. While the nature of the award has certainly changed over the years (Hitler won in 1938?) and the official title was amended from ‘Man of the Year’ to ‘Person of the Year’ in 1999 (seriously, guys? 1999?), the honorary continues to be bestowed, according to TIME, “on the person or persons who most affected the news and our lives, for good or ill, and embodied what was important about the year.”

But for all the hype about Jews taking over the world, we’re a group that’s not been very well represented on this list. Most years the title goes to the president, which pretty much rules us out completely. And sure, we all won in 2006 (literally, the person of the year was “You“), but that felt a little like cheating. But then Federal Reserve chairman Ben Bernanke got it in 2009, and Facebook king Mark Zuckerberg in 2010, and we really felt like we were finally sitting at the cool table in the TIME cafeteria.

This year, we’re keeping our fingers crossed for one of these four Jews to take home the 2012 title. But hopefully not you, Sheldon Adelson. Who will you be voting for? (Not that it really matters—the editors choose the winner anyway.)

“He is an entertainer, but he’s also a fact checker, hypocrisy meter and pundit who affects how people view the major players in America’s messy, vital democracy”

The host of Comedy Central’s The Daily Show and frequent mention on Jewcy is an interesting pick for an election year. His Emmy-winning campaign coverage was funny, and at times quite poignant, but we’re not so sure he’s got the chops to compete against the stacked group of foreign policy players in this year’s nominee batch. Plus his pal Steven Colbert was also nominated, so there’s that.

“Now it’s up to him to help his country achieve a lasting peace in one of the most volatile corners of the world.”

We like Bibi for the win, if only because we’re pretty sure it will cause outsize outrage from all sides. TIME likes to make their picks controversial—sorry, conversation-starting—and he’s right up there on that one. But like our fleeting case of Biber Fever last month, we’re just not sure Bibi’s going to make it all the way to the editor’s finish line.

“The hurricane’s destruction prompted Bloomberg, who until then had remained neutral regarding the presidential race, to endorse Barack Obama just five days before the election — and to spotlight, as his rationale, another issue he feels the political process has foolishly ignored: global warming.”

If they go with a Sandy-themed pick, Bloomberg’s got a one-in-three shot of making it—he just needs to beat Jersey governor Chris Christie and Obama, who already won in 2008. Otherwise, he seems like too much of a New York-centric choice. We still love you though, Bloomy.

“After Barack Obama won re-election despite those efforts, Adelson — a strong supporter of Israel and Jewish causes, whose fortune Forbes pegs at some $20 billion — shrugged off the checks as the price of doing business. “Paying bills,” he told a Norwegian reporter. “That’s how you spend money.””

They missed the very next sentence of Adelson’s quote, though—you know, the part where he said “Either that or become a Jewish husband — you spend a lot of money.” Gross. Disqualification, please?

‘But Our Wall is Different!’