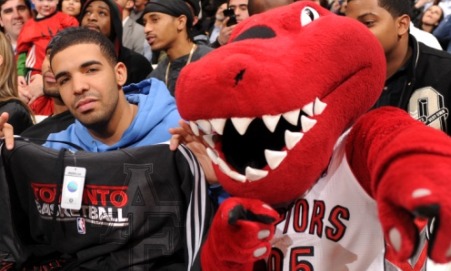 It looks like Drake is following in Jay-Z’s footsteps. No, no, Solange Knowles is already taken. But like Hova and the Brooklyn Nets, Drake just became an executive for the Toronto Raptors. He signed on as a host, consultant, and business partner, the Toronto Star reports:

The nuptials will start Monday with an announcement that Drake is partnering with the Raptors as they accept the 2016 NBA All-Star Game. He’ll be drafted in as a non-official host of festivities. An actual MC, as well as a figurative one.

The hip-hop star will also launch a clothing line in conjunction with the team. Most intriguingly, he is being asked to consult on a complete redesign of the club’s image to coincide with the 20th anniversary of the franchise in the 2014-15 season.

Drizzy is obviously the man for the job. He frequently sits courtside at games and he’s Toronto’s biggest star, besides Geddy Lee, of course. Come to think of it, a co-rebranding by Drake and Lee would be inspired, but what do we know.

Mazel tov, Drizzy! If only you were around in the early 2000s, then maybe Vince Carter would’ve played harder.