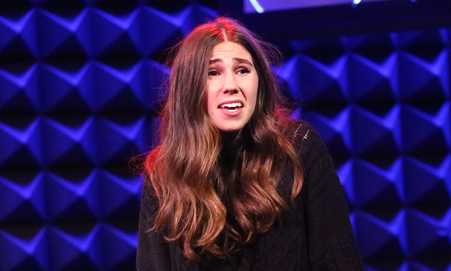 Playwright David Mamet, who publicly disavowed his former liberal leanings, has made quite the strong-worded endorsement for Mitt Romney in the Jewish Journal. In it, he makes repeated reference to children, which makes us think of his daughter Zosia, better known as the clingy, image-conscious Shoshanna Shapiro on Lena Dunham’s HBO series, Girls. Needless to say, Shosh would be mortified.

Here’s what Mamet has to say to “those Jews planning to vote for Obama:”

Are you prepared to explain to your children not the principles upon which your vote is cast, but its probable effects upon them?

Irrespective of your endorsement of liberal sentiments, of fairness and “more equal distribution,” will you explain to your children that top-down economic policies will increasingly limit their ability to find challenging and well-paid work, and that the diminution in employment and income will decrease their opportunity to marry and raise children?

Will you explain (as you have observed) that a large part of their incomes will be used to fund programs that they may find immoral, wasteful and/or indeed absurd? And that the bulk of their taxes go to no programs at all, but merely service the debt you entailed on them?

Will you tell your children that a liberal government will increasingly marginalize, dismiss and weaken the support for and the safety of the Jewish state?

Shoshanna is so not talking to him right now. Mamet, meanwhile, is the guest of honor at tonight’s Manhattan Institute Wriston Lecture, an honor typically reserved for the likes of Condoleezza Rice, George Will, and the Honorable Samuel A. Alito, Jr.

A note to a stiff-necked people [Jewish Journal] Previously on Jewcy: How Do You Solve a Problem Like Shoshanna?
Lena Dunham Wants Your First Time Voting to Be Special
David Mamet Abandons “Brain-Dead Liberalism”