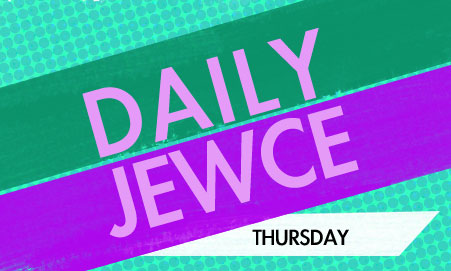 • The Jews who invented Häagen-Dazs.

• There is a Seinfeld food truck serving muffin tops and soup, run by, naturally, the guy who played the Soup Nazi.

• Turns out we are not the only ones obsessed with Rashida Jones.

• Jesse Eisenberg seems to like TCBY a lot. Or at least enough to write a fake review of it as a nine-year-old.

• The French Olympic swimmer with the Hebrew tattoo.

• Check out a pre-Superbad Martin Starr’s Freaks and Geeks audition, where he describes the “Hitler Punch”

‘Seinfeld’ and the Law

Spotlight On: Eli Batalion and Jamie Elman of “YidLife Crisis”