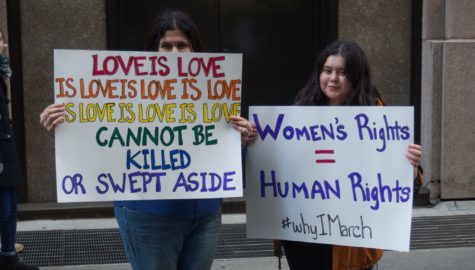 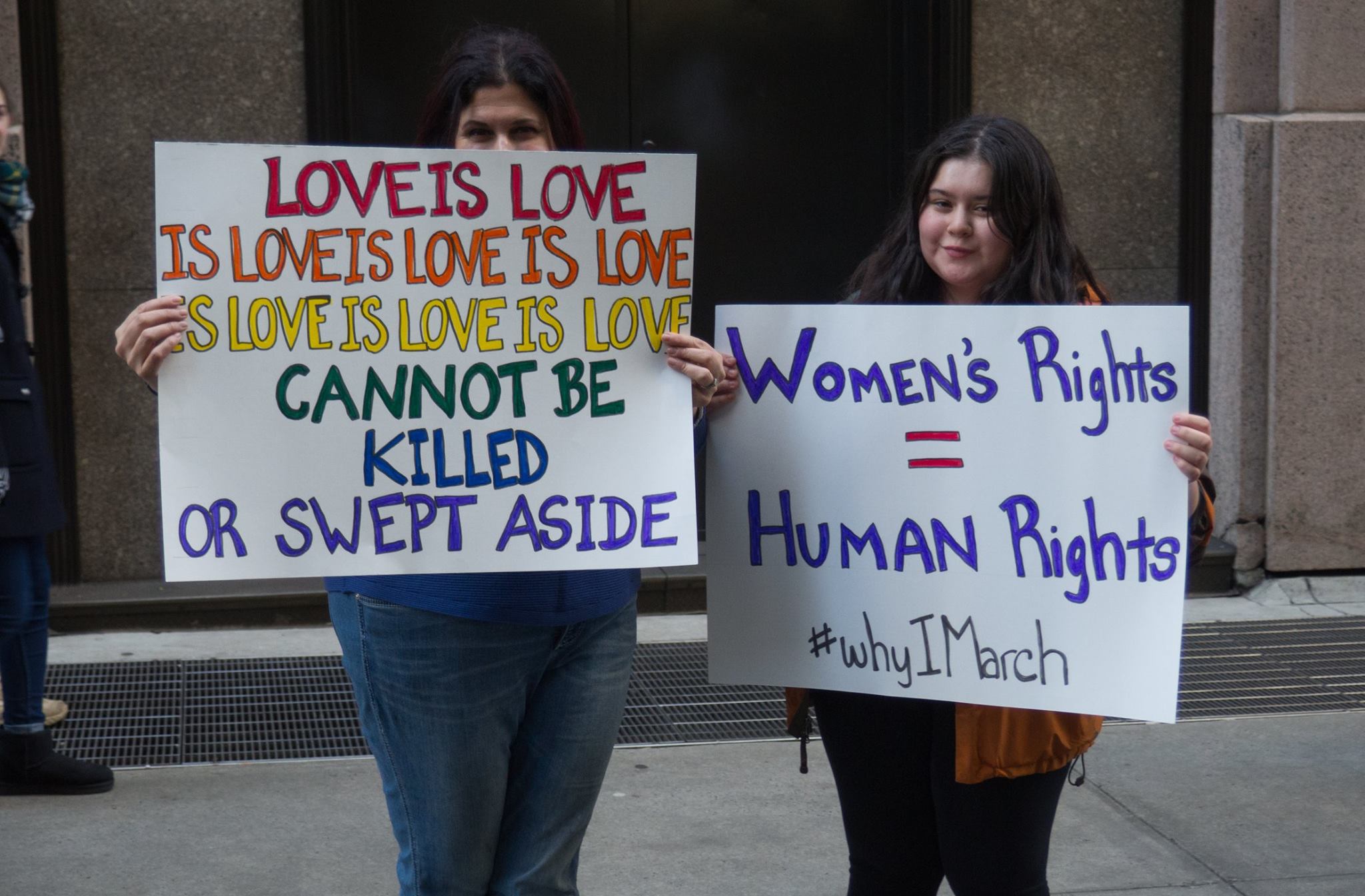 Editors Note: This is part 1 of our 2 essays on Jewish experience in the post-Inauguration Women’s March. Part 2 can be found here.

I came down to Washington DC as an individual citizen seeking to participate in a demonstration of my displeasure. Not only was I unhappy with the results of the recent election, but I was infuriated by the unprecedented assault on minority communities and protected groups by a nativist, bigoted, and misogynist demagogue. In a rare moment, I didn’t use a Jewish lens to analyze my choice to join the hundreds of thousands of people coming to Washington; I was too driven by my Democrat and liberal ideologies to consider any other angles. The fact that the rally was on Shabbos might have given me momentary pause, but any objections were dwarfed next to my desire to stand up for causes I believe in and be counted alongside my fellow citizens. So, as the possessor of a Y-chromosome, with skin color that passes for privilege, and with the spirit of feminism beating strongly in my heart, I made my way to the nation’s capital.

When I became swept up in the masses of humanity that descended upon Washington, my briefly neglected Jewish internal monologue began to reassert itself, and I wondered how many Jews might show up, and in what form they would arrive. I knew that Shabbat would present a complication for some, and that no (Conservative) Jewish organization I was associated with (Solomon Schechter, JTS, USCJ) had reached out to organize busing, shirts, or other logistics, but I was positive that the human rights devotion in contemporary liberal American Jewish identity would demand that Jews be present. After all, what Jew can go to shul on the High Holidays, and not be reminded that the Jewish tradition strongly demands action on the human rights crisis du jour? When I emerged into the Metro station at L’Enfant Plaza, about 10 blocks from the rally point for the march, I began to actively look for the Jews in the crowd and the messages they carried with them.

Six hours later, I completed the march in a state of numbed shock. After watching and marching with hundreds of thousands of people and listening to many of the speakers, I determined that the organized Jewish presence at the march was exactly nil. Obviously, there were Jews present, making themselves visible through signs in Hebrew, Stars of David, references to our time as refugees and victims, and exhortations to pursue justice, but they also seemed to march as individuals.

Where was Hadassah? Where was the Anti-Defamation League? Where were the JCCs? Where was the USCJ, Women’s League, and JOFA? Where were the lines after lines of Jewish women and men who consistently mobilized to protest genocide in Darfur, terrorist attacks against Israel, or, in earlier times, for the Refuseniks of Russia and civil rights? While I know that a few did formally attend, such as the National Council of Jewish Women and AJWS, the myriad organizations of the Jewish community of America, the most powerful and wealthiest Jewish community of the world, seemed conspicuously absent.

Over the next few hours, I considered the reasons for this void. The most obvious answer was the fact that the march happened on Shabbos. Many synagogues and religious institutions grow skittish when faced with the violation of their official positions. Even Jewish political, cultural, and social groups recognize that Jews are both an ethnic and religious group, and aren’t quick to ask their members to violate Shabbat. But the more I considered this option, the more disappointed I became with that answer.

For years, it seems that Conservative clergy and leadership have almost exclusively preached Humanist dogma, selectively reading and cherry picking texts to give the impression that the essence of Judaism is not a belief in God or an observance of commandments and rituals, but a devotion to protecting our fellow humans. Hillel’s teaching that the Golden Rule is the epitome of Judaism, the concept of “saving a life is like saving the world,” and the reminder that saving a life is more important than Shabbat are so often repeated in a synagogue setting that even the average congregant can give those sermons from memory and then apply them to the human rights crisis of the moment.

This moment, the first protest in defense of those whose rights and bodies are inherently threatened by the new administration, was the opportune time to follow words with actions. Why didn’t our rabbis tell us that, while coming to shul is important, it is superseded by participating in the protection of the lives and wellbeing of millions of fellow citizens? If Jared and Ivanka, now the most visible Jews in America, could get special Orthodox rabbinic dispensation to dance Inauguration Night away, why weren’t we told by our spiritual and moral leaders that our place on that historic Saturday wasn’t in the synagogue but on the streets? Heschel’s ubiquitous line about praying with his feet rings as a condemnation of every rabbi who invokes his civil rights activism but fails to appear because the trumpets sounded on Shabbat.

After calming my outrage (a cocktail helped), I considered a different possibility for the absence of the large Jewish organizations, and concluded that the current mentality of the mainstream Jewish communal organizations is not remotely prepared for the new landscape of liberal causes. After being overwhelmingly present during the Civil Rights movement, and claiming that moment as the emblem of our devotion to liberal justice, Jews largely moved away from protesting on behalf of our fellow Americans. The ’70s, ’80s, and ’90s were decades marked with increasing tension, rather than cooperation, between the Jewish and African-American communities, while Jews unified around their own issues, such as the Refuseniks and Israel.

At the same time, Palestinian activists have joined with many liberal causes, and used the power of intersectionality to infuse their own beliefs into the positions of indirectly related movements, like Black Lives Matter. Linda Sarsour’s position as one of the co-chairs for the March was no coincidence, but a clear indication that Palestinian rights are now inextricably linked with the causes of liberal activists. In contrast, Jewish organizations have been very late to the practice of intersectionality, and the position of many mainstream Jewish organizations on Israel creates a certain level of incompatibility and complications when it comes to joining forces with other liberal groups. The lack of a significant, vocal, and visible Jewish presence at the march was definitely a result of these trends.

As the new administration continues to roll out an already horrifying agenda, the Jewish community will have some tough questions to face. After years of hibernation, we are no longer the organizers or the platform-writers. We’ve spent too long with our backs turned away, and other voices, occasionally ones that are hostile to our interests, have filled the void we left. The Women’s March presented us with the golden opportunity to awaken the long-dormant spirit of Jewish protest and join forces around an issue that is, for most Jews, uncontroversial. It offered us the chance to embrace intersectionality and prove that, while we might be disparaged as privileged, we are nonetheless prepared to stand with those who need our support. The Women’s March was the first test of liberals in the Age of Trump, and we failed.

Reuben Berman is a graduate of Columbia University and the Jewish Theological Seminary and a New York native. He has worked as a Fellow and Research Associate at the Reut Institute, a think-and-do tank in Tel Aviv, Israel.

Reuben Berman is a graduate of Columbia University and the Jewish Theological Seminary and a New York native. He has worked as a Fellow and Research Associate at the Reut Institute, a think-and-do tank in Tel Aviv, Israel.

Does The New York Times Obituary Section Have a Jewish Problem?