Social Justice
by B. Lana Guggenheim 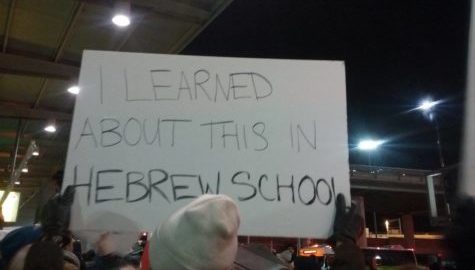 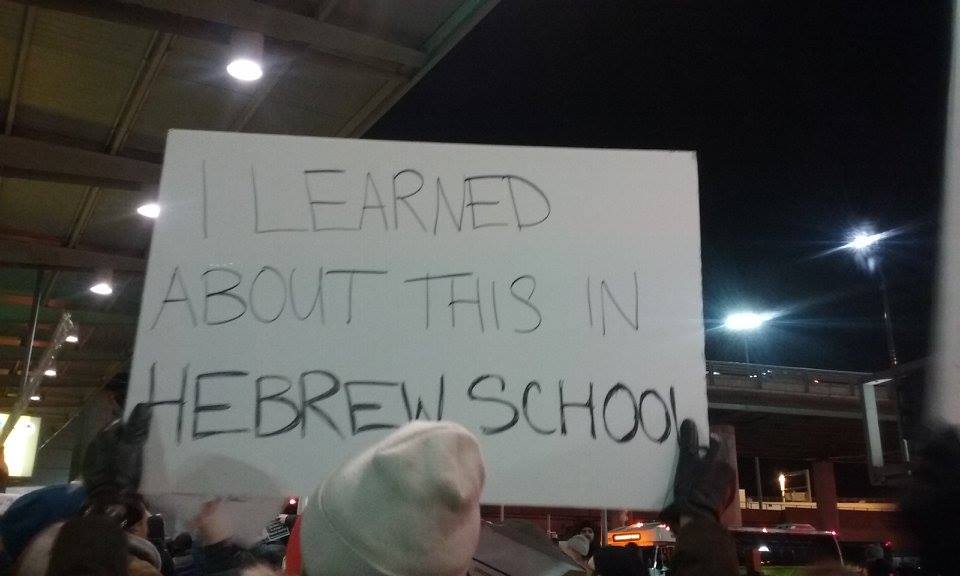 Since the election, it has begun to dawn on me that the Jewish community might be facing a reckoning.

It hit me Saturday night, when at the protest at JFK. There were other Jews there, but most surprising to me was seeing a lone Haredi man. Haredim don’t usually come to any protests but their own, and generally stay away from loud activist actions. Usually, the community prefers to fly under the radar and not rock the boat, so his presence there was in its own way extraordinary. He was American and Israeli, and admitted he was there to support the protest against the Ban, and like many Jews I have spoken to, recalled the deaths that resulted when the United States turned away Jewish refugees during WWII. But he still held himself apart from the group, smoking a cigarette, and looking over at the shouting, exuberant crowd. “If I go in there [into the crowd] and start a ‘Free Palestine’ chant, will they chant with me? If they do, then there is no place for me here.”

He isn’t the only Jew who feels this way.

It’s no secret that there is tension between the mostly pro-Israel politics of the American Jewish community, and the mostly progressive politics of the same group. For decades, we have been trying to square the circle— pointing out that Jews have legitimate roots in the area, the multiple international agreements, the belief in a two-state solution, and the altogether nuanced nature of the conflict in the face of the reductive sloganeering so common in politicized spaces.

It’s never really worked — there’s too much pressure from the extremes on the Left and the Right — but I think the jig is up now. There’s no more center ground on which to stand.

It’s not because arguments for nuance are any less true. A two-state solution is still the one supported by the international community, and the one the UN expects and demands. Jews still do and will always have deep-rooted history in the Holy Land, and self-determination is no less of a national right for us than it is for anyone else. But the actions of Bibi’s government make such arguments fall flat. No one wants to hear it when the state is led by a man plagued by corruption scandals, who constantly undermines the two-state solution while pretending to uphold it, who increasingly marginalizes the already crippled center and left parties in Knesset, empowers the extremists in Israeli society, and embarrasses the head of the country by addressing Congress on his own. Simply put, when the head of state continues on with antics like this, no one will care to hear your defenses. It’s kind of like asking the world not to worry about the actions of the USA with Trump at the helm: no one has time to waste with such a request.

On the one hand, the pressure on Diaspora Jews to take the “right stance” on Israel is anti-Semitic. No Iranian national is expected to disavow the actions of their government in order to be welcomed in activist spaces. Nor is any Palestinian, Chinese, Turkish, Saudi, or German citizen. It’s a standard put on no one but the Jews, and it’s hypocritical. We should call that like it is.

On the other hand, we are nonetheless faced with internal accountability to ourselves and each other, whether we choose to deal with it or not (and for the most part, our community is continuing to dodge the issue).

What else are we to make of it when Bibi Netanyahu praises Donald Trump’s repeated intentions to build a wall, when both southern-border walls were built for similar ethnonationalist exclusionary reasons? What else do we expect when we excuse one wall, but condemn the other? Why are we protesting at JFK to allow the entry of refugees, but not at Ben Gurion? We correctly see ourselves in today’s refugees barred entry, recognize in them the ghosts of our pasts, so why don’t we see ourselves in Palestinians? How come Trump’s wall is bad, but ours is OK?

There are real differences between Israel’s desire for security, which is based on multiple wars and even outright genocidal speech coming from its neighbors at different times. Such things are not the case for the United States, and never have been. But if you spend time trying to point this out, you are missing the point. This article is not about how Israel differs from America and should be judged on its own standards, nor is it about the praise-worthy grassroots movements of young Diaspora Jews to address Israel’s illiberalism, like J Street, Open Hillel, and If Not Now; it’s about how leadership in Israel and America are becoming increasingly similar, to the detriment of both. Trump’s supporters are making comparisons between the two states as part of their rhetoric to bolster their opinions and policy preferences. Some of their comparisons only bear the slightest resemblance to facts; other comparisons are a little too on-point for comfort. While they’re half-wrong, they are also half-right.

If Bibi gets replaced with someone dedicated to moving forward with the peace process, maybe the American Jewish community can continue to kick the issue down the road. But I am not so sure that will happen, or that we should try. I think if we don’t expect anyone to give the slightest inch to Trump and his supporters, then demanding it for Bibi due to our own community loyalties is nothing short of hypocritical. If we can see and praise the domestic and international backlash against Trump, and understand that it does not mean the entire world hates America, then we can probably understand similar sentiment aimed at Bibi. (That doesn’t mean we should confuse them for people who want to eliminate Jewish presence in the Levant altogether, but it is a mistake to assume that this Venn Diagram is a circle.) And I think we will be a better, stronger community if we stop enabling the lazy rhetoric among ourselves and avoiding responsibility for it by labeling that support for Israel. Supporting Israel should mean supporting the tough decisions that leave everyone better off, not supporting extremist policies that hurt both Israelis and Palestinians. That kind of “support” only aids the people who want to blow up our bus stops, or worse (much like how Trump’s “Muslim Ban” is a boon for ISIS recruiters).

There are really only two ways this can end. Israel can retreat from its hyper-ethno-nationalist right wing positions. This would be good for the country, good for both Israelis and Palestinians, and good for the Diaspora Jews who increasingly feel alienated from a state that less and less holds the liberal ideas common to the majority of Diaspora, especially American Jews. Or, the country can, like the USA, like Britain, like Turkey, like Hungary, like Venezuela, continue on its regressive path. This will entrench social and political trends that locally will result in hardship, bloodshed, and anguish, as well as increasingly alienate a mostly liberal Diaspora— except for an increasingly hyper-conservative, tribalist, and vocal minority.

This was a trend that was happening before Trump’s election, or his monstrous “Muslim Ban.” But the election helped speed up the collapse of the status quo. And the results can be seen on the streets. Fellow American Jews: do you want to support an Israeli Prime Minister who keeps silent when the American President erases Jews from the Holocaust? Do you want to support a Prime Minister who plays sycophant with Trump over Twitter to support the latter’s harmful and bigoted policies? Why do we let gangsters with an unquenchable thirst for violence against anyone not like them dictate our community’s political position?

We should continue to hit the streets in support of immigrants and refugees, for we too were strangers, and we viscerally understand the high stakes for people fleeing war only to be greeted with closed doors. But maybe we should bring back some of that feeling to our internal community politics as well.

Photo by B. Lana Guggenheim