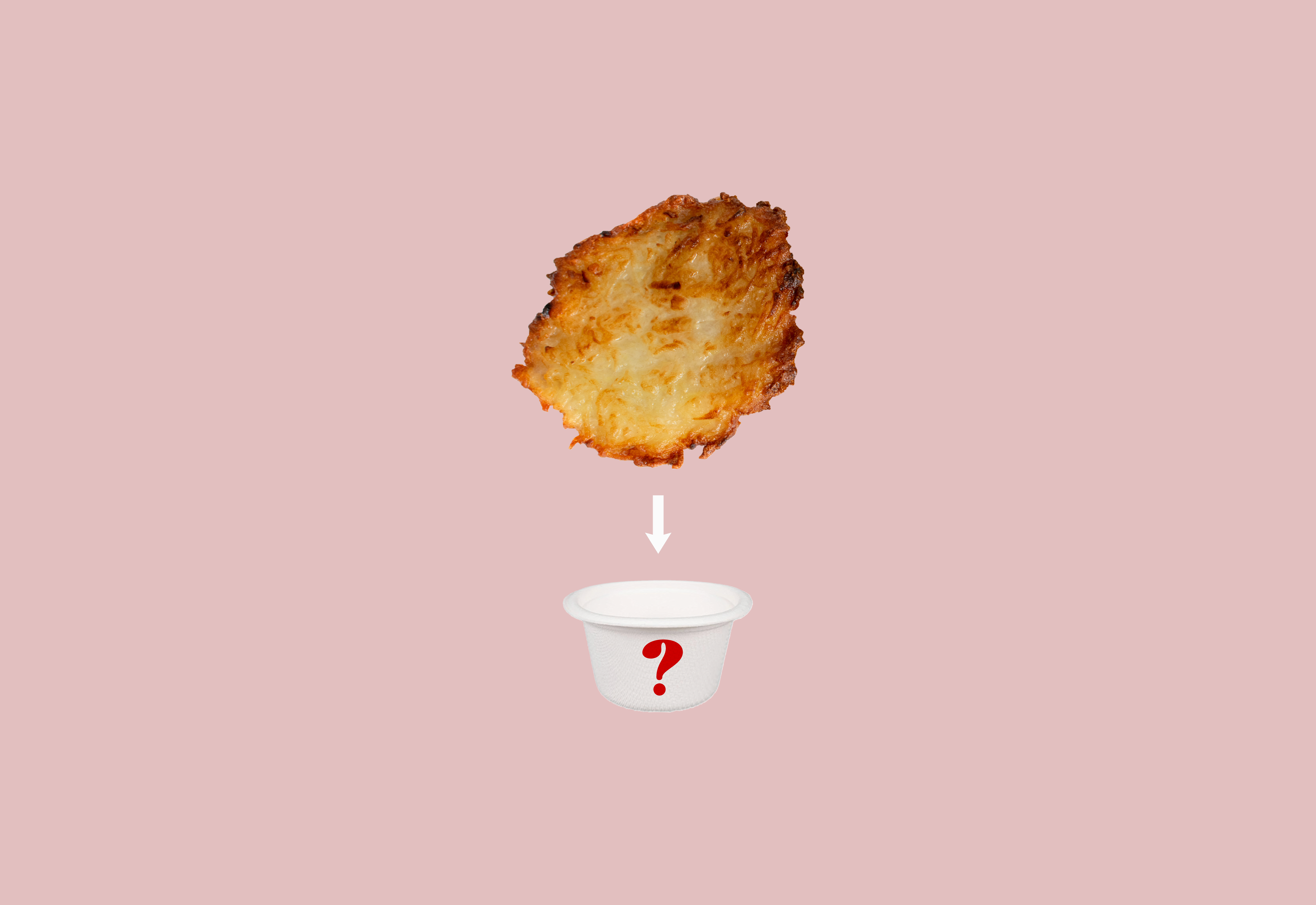 Latkes have long been a staple of Chanukah cuisine, and the debate over their appropriate topping is almost as long-running. From the classics to the absolutely batshit, here’s what your favorite latke topping says about you.

Sour Cream: Just because it’s a classic doesn’t mean it’s the right decision. You’re probably pretentious AF and painfully stubborn about your opinions. You’re the Mom Friend, and you make sure everyone knows it.

Applesauce: Your sweet tooth is indicative of your childlike tendencies. You’re creative and fun, often called the funny one in your friend group. You love pop music, and you’re not afraid to show it. You like what everyone likes, and what’s wrong with that?

Plain: Why mess with perfection? Real recognizes real. Plain latke lovers don’t try to mask the taste of latke with extraneous, unnecessary toppings, and I love that for you. Either you aren’t American, or your parents weren’t, and you make a point to play the dreidel game annually. I just know.

Garlic Mayo: Ok, self-proclaimed ‘foodie,’ I see you. It’s a bold choice, but I can’t call you wrong. If you cook your own latkes, you have a secret ingredient you swear by, maybe caramelizing the onion before mixing it with the potato, or some elaborate potato-soaking process. You disregard others’ approval, either living life for yourself or actively trying to trigger them. Good.

Ketchup: This is what assimilation’s done to you?! Get help. Latkes are not hash browns. You’ve never made your own latkes, and you probably eat sufganiyot without filling.

BBQ Sauce: You’re definitely the Dad Friend of your friend group. You probably also do the Sufganiyah Challenge annually.

Chrein (Jewish horseradish-beet sauce): Topping latkes with chrein seems like it would be better than topping gefilte fish with it, but let’s not beat around the bush here; we know you eat gefilte fish. You probably also eat chopped liver. And cat food.

Vanilla Ice Cream: You pride yourself on being different. Quirky, one might say. It’s time to let go of the past, Vanilla. We get it, you were the weird kid on the playground and no one wanted to play with you and now you’re trying to reclaim your weirdness. Reassess, Vanilla. There are better (and less insane) ways to stand out.

Lox and Cream Cheese: Ok, grandpa, we get it. You’re very Ashkenazi, very New York, and very Old Jewish Man. It’s not Pesach, dude. You can just put that on a bagel.

Deli Meat: You’re just as Ashkenazi and as much of an old soul as Lox and Cream Cheese, but, like, quirkier. Not quirky in the try-hard, wannabe Vanilla Ice Cream way, though. You’re genuine as it comes, acting irrespective of others’ judgements.

Guac: You’re definitely a millennial, and painfully passionate about which Hogwarts house you’re in. (Hufflepuff, probably.) Get with the times. You do not need to put guac on everything… especially on a latke? Please stop. Enough.

All these factors considered, all the potential potato pancake toppings in mind, choosing a favorite should be a deeply personal decision. With that being said, though, I would argue that there’s only one correct latke topping: