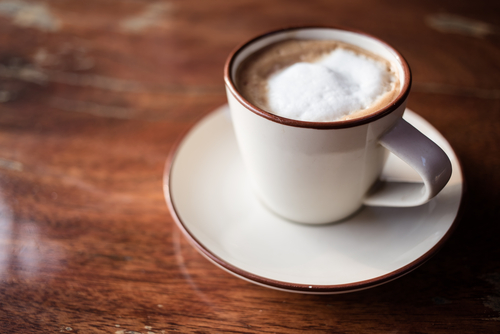 Every woman has different memories of her pregnancy. I just wanted to sleep. The constant drowsiness took over my thoughts and habits during these long nine months, and I craved coffee. Good, strong cappuccino, which I had discovered a few months earlier on a trip to Italy.

Having a cup of good cappuccino in Tel Aviv of the late eighties was virtually impossible. Most Israelis were happy with their nes (instant coffee) or their botz (literally “mud”, finely ground coffee dissolved in boiling water). One could have an espresso or a cappuccino, locally called hafuch (upside down), but one really shouldn’t, as it is watery, bitter, and either scaldingly hot or lukewarm.

One day a rumor reached me that on the corner of Ben Yehuda and Frishman, there was a place famous among coffee freaks. It was called Mersand, and these guys knew about coffee. Intrigued but skeptical, I arrived on a hot sunny afternoon, plopped my bulky frame on a small chair and ordered a hafuch.

The very first aromatic sip catapulted me out of my narcolepsy. Suddenly alert and with an early euphoria of a well earned caffeine buzz, I surveyed the surroundings. The place looked pretty spartan, with low stools, tiny Formica topped tables and a modest cake display (it took me another visit to discover that these simple looking cakes were actually delectable). But who needed cakes when you had this unbelievable coffee? I returned almost daily, and when my daughter was born, took long walks there with the stroller. I got friendly with the owner, middle-aged and extremely good-looking Mike Mersand. I started recognizing the regulars—a peculiar mix of aging surfers and yachtsmen and elderly, meticulously turned out German-speaking ladies. I arranged my errands so that they would take me via Mersand and met my friends there. And I never stopped to wonder how such a great place could exist in a coffee desert.

Until one day, almost overnight, the desert started to bloom. A couple of young Israelis returned from a long journey abroad and decided that what Tel Aviv needed as a real espresso bar. They rented a tiny place on Yavne Street, off Rothschild Boulevard, and spent a small fortune renovating it. The concept was no frills, no food and no tables. You grab your coffee, you drink it standing up at the bar in three gulps, like in Italy, and off you go (and no paper cups, mind you). And the coffee will be great. The coffee was indeed great, but this was the only thing that went according to the original plan.

Israelis treat their cafés as surrogate homes. They like to sit down, have a bite, read the paper, meet some friends. The owners realized that if no food was served, the place would go bankrupt. So they added tables, put some food on the menu and a brand new breed of a local café was born—with Italian coffee and Israeli everything else. A couple of months after the opening, Espresso Bar (the place was actually called “Espresso Bar”, luxury reserved for ground breakers) was a hit, with crowds waiting for a table filling the entire block.  Soon they opened another branch on Maccabi Street in Northern Tel Aviv, and then another. Other entrepreneurs were quick to follow suit and in a matter of months, espresso bars became part of the local scene.

Today you find them on every corner. The majority, sadly—chains. Privately owned, charmingly idiosyncratic establishments are becoming increasingly rare. But the coffee is invariably good. “Starbucks” failed in Israel, and we take great pride in the fact that the beverage this coffee giant offered was not good enough for the local palate.

And what about Mersand? I went there the other day. The place changed ownership, handsome Mike is no longer around, but the ambience and the run down décor remained basically the same. Elegant German ladies still linger over coffee and homey cakes. I ordered hafuch, it was fine, but completely forgettable. Or maybe it was just me. Twenty years older.

Janna Gur, author of The Book of New Israeli Food, is guest blogging on Jewcy, and she’ll be here all week. Stay tuned.

I was born and raised in the former Soviet Union and immigrated to Israel in 1974. I am the founder and chief editor or Al Hashulchan Gastronomic Monthly, the leading Israeli food and wine magazine. I'm writing to you from Tel Aviv.