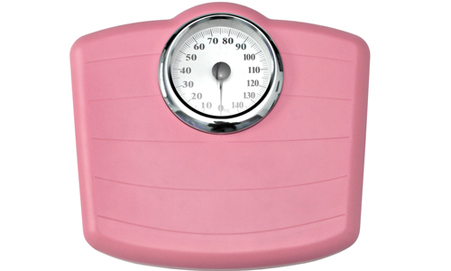 Last spring, when Dara Lynn Weiss wrote in Vogue about putting her 7-year-old daughter Bea on a strict diet, the media erupted in a volcanic froth. While childhood obesity is hardly an unpublicized topic, new debates raged over youths, dieting, and the seemingly extreme “Tiger Mom” approaches to weight loss. And I’m sure they’ll continue since Weiss’ new book, The Heavy, was published last month. Originally, I jumped on the bandwagon of criticism, but something in Weiss’ battles over weekly pizza days at her daughter’s school and 100-calorie snack packs rang true to my life. That’s because 15 years ago I was Bea, the fat girl in a group of privileged, skinny little girls.

Up until I was in second grade, I assumed I looked like all the other girls in my predominantly Jewish suburb, by which I mean thin. With nary an excess pound of flesh in sight in my svelte Hebrew school class, my girth was even more apparent, but I was blissfully ignorant. However, with each disappointed doctor’s check-up and Hanukkah party where teachers told me to stop taking so many latkes, I realized I was fat.

I stress the Jewishness of my upbringing not only because Jewish women have been shown to have higher rates of eating disorders, but because I believe there is a skinny subculture within the world of upper-middle-class Jewish American women. It’s difficult to articulate, but not for nothing did endless stereotypes emerge in post-war America about Jewish women loving Tab and jokes about their penchant for artificial sweeteners; look at Gilda Radnor’s JAP-py Rhonda Weiss singing about her love of Saccharin. There was a certain strain among us Jewish women obsessed with being thin. Despite (or perhaps because of) the fact that eating has been a key part of Jewish life for centuries, I believe there exists a counter-current of Jewish women struggling to become skinny.

Overeating was a part of my personal Jewish identity. Some of my favorite moments were—and still are—noshing on chopped liver as I help my mother clean up after our behemoth and beautiful Rosh Hashanah meals. And it wasn’t just that I associated delicious foods with Jewish celebrations. I grew up identifying with overweight Jewish women both real and fictional, like TV’s Rhoda Morgenstern and playwright Wendy Wasserstein.

At the same time, I don’t think it’s purely coincidental that the founder of Weight Watchers, Jean Nidetch, was a Jewish American woman, a fact I discovered at my first meeting in June of 1997. Weiss noted that at age 7, her daughter Bea was 4-feet-4-inches and 93 pounds; I was 4-feet-8-inches and 99 pounds. I stood on a scale in a boardroom with posters of lean fish portioned to the size of a deck of cards and scoops of yogurt the size of tennis balls. Though surrounded by women, I was the only one who hadn’t hit menopause, aside from my mother who sat holding my hand.

Like Weiss, my mother had been warned by the pediatrician that her daughter’s weight threatened her health. My mother battled with her weight at different points in her life, as had her mother. I come from a line of Jewish women with a loving, but also problematic, relationship with food.

Unlike Weiss, my mother let me drop the Weight Watchers routine by the end of that first summer; I had only lost a frustratingly small four pounds from painstakingly counting breads and eating just grilled fish and egg whites. I don’t know whether she let me stop out of the logistical necessity of caring for two other children, including a newborn, or an active decision not to add dietary isolation to the social isolation I already experienced. Nothing makes it clearer to a little girl that she’s fat than putting her on a diet that separates her from eating with friends.

While Bea may have nipped her weight issues in the bud at age seven, I would continue to struggle for the next decade/to this day. Weiss stressed the medical justification for her daughter’s strict diet, but I’m sure she was also motivated by what every woman with weight issues knows: Life is easier when you’re thin, and the fact that you’re healthier and more likely to live longer are the least of it. You get invited to more bat mitzvahs and more dates. Your butt actually looks good in pastel-colored Juicy Couture tracksuits.

Able to enjoy these skinny social benefits, perhaps Bea won’t have the same insecurities I carry to this day at a mostly (depending on my margarita consumption) size 6. I found my own rhythm for weight loss and maintenance in my late teens and early 20s, but I still feel overly aware of my flesh and fat. I don’t blame Dara Lynn Weiss for wanting to spare her daughter this emotional baggage.

But I can’t help thinking that, at 23, Bea will still feel the same way I do. As melodramatic, superficial, and petty as it sounds, being called fat and realizing you’re not like the other little girls stays with you. You don’t easily shake off the memories and self-doubts even if you can shave off the weight. As Bea was quoted in her mother’s article, “Just because it’s in the past doesn’t mean it didn’t happen.”

In the end, when that loneliness and insecurity return because you’ve gained an ‘only noticeable to you’ three pounds over spring break or your favorite shul dress won’t zip because you gorged on challah and hummus (a comfort food of mine), reminding yourself that people don’t think of you as ‘fat’ anymore won’t make you feel better. Only turning to your mother, or someone else you know that has loved you through thick-and-thin waist, will help.

Emily Shire works for The Week magazine in New York and has written for Slate, The Forward, and HelloGiggles among other publications. In many of her writing endeavors, she divulges too much personal information, generally to the chagrin and embarrassment of her family. Follow her on Twitter at @eshire.

What Your Favorite Latke Topping Says About You