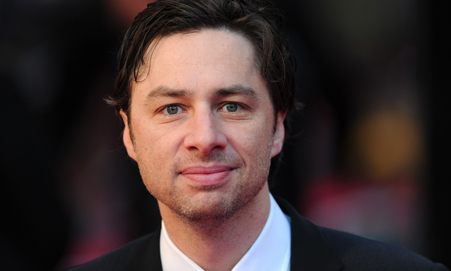 Just two months after his recent YouTube pitch for Yeshiva University, actor Zach Braff, who had a “strong Conservative/Orthodox upbringing,” is entering the big league of Jewish theater: Woody Allen on Broadway.

On April 10, the former Scrubs star will make his Broadway debut in “Bullets Over Broadway” as David Shayne, a struggling writer who casts a mobster’s ditsy girlfriend in one of his plays in order to get his show produced. The musical adaptation of the 1994 Oscar-nominated film is not Braff’s first experience acting in a Woody Allen production: at 18, his first movie role was as Woody Allen and Diane Keaton’s son in “Manhattan Murder Mystery.”

In a recent essay in The New York Times, Braff reflected on his journey to acting, highlighting his theater bona fides and emotionally taxing childhood:

I was a melancholic child. Worried, anxious. I never felt as if I belonged anywhere, as if I were a foreign exchange student living among the other kids, who seemed predestined to love sports. Add to that alienation the fact that my parents were going through a divorce, and I was truly treading water. But in that junior high school auditorium, I felt like I’d discovered a secret I didn’t even know was being whispered. There was a place where I might belong: It was the Theater, and I was sold.

Best known for nine seasons as Dr J.D. Dorian on Scrubs, Braff is also famous for writing, directing, producing, and starring in “Garden State,” the 2004 movie set in his home state of New Jersey. His upcoming April premiere brings a new kind of Jersey Boy to Broadway–the Jewish kind.

Related: Zach Braff’s New Movie, “Wish I Was Here,” Has A Release Date!

Lily is an editorial intern at Tablet Magazine. Her Twitter feed is @lilithlw.