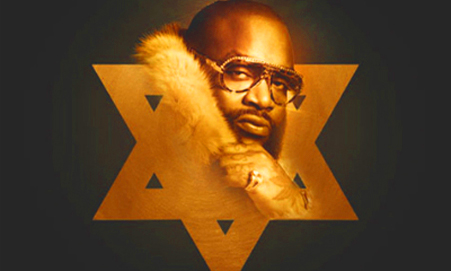 What exactly inspired Rick Ross to name his latest mixtape The Black Bar Mitzvah? There’s not much in the text to give us any clues. Ross mentions the mixtape’s name a few times, but no more or less than he does Meek Mill’s upcoming Nightmares and Dreams (to be subtly released the day before Halloween!), his own previously released God Forgives, I Don’t, the upcoming Maybach Music Group tour, or the assortment of other projects and groups and associations that come with a mixtape released by the most powerful name in radio rap.

The only direct focus comes in the “Rosenberg” skit, in which New York DJ Peter Rosenberg sells out his heritage to take on the role of rabbi commenting on a “lavish” lunch spread and “the beautiful titties hanging out at the bar mitzvah service” (to be fair, I’d probably do this too if Rick Ross asked me). Weirdly, church organs and a Latin-sounding choir play in the background, strongly suggesting that Ross has never actually been to “Beth Shalom, Miami,” as Rosenberg claims.

Logic dictates that Ross got this idea from Drake. Drake, who brought the age of getting re-bar mitzvahed down from 73 to 25 with his “HYFR (Hell Yeah Fucking Right)” video earlier this year. Drake, who is actually Jewish. In the instant-classic music video, Drake’s re-bar mitzvah is a mixture of your typical synagogue-going crowd—and Lil’ Wayne and DJ Khaled. As Rembert Browne wrote in Grantland, the video was both ridiculous and deeply personal. Not entirely logical from the outside, it clearly felt right for Drake and the moment: “His world is a collision of cultures, so why pretend that any of them live in silos?”

Drake shows up on The Black Bar Mitzvah, but doesn’t bring any Talmud quotes with him. Instead, he’s got the most victory-lapping verse on the whole victory-lapping album; he sounds drunk and it’s terrific. “You let Drizzy get a verse, you gon’ get this worrrrk!” he slurs, like your best friend celebrating a promotion. Ross’ mixtapes have a way of bringing the out the best among those chosen to guest, and Bar Mitzvah is no exception. Rap baby Rockie Fresh steals the show with lines like “Like racism/I’ma be around,” 2 Chainz shows up because Obamacare made it illegal to have a mixtape in 2012 without him, and the whole thing runs pretty smoothly. Ross comes off as a slightly weird, very rich person who can make people feel successful just by being around them.

Basically, it feels like a normal mixtape, which makes the Jewish trappings even odder. The cover art, with a golden Ross popping out of a Star of David, feels like the end result of some historical fiction where Israel’s main export is customized 1970’s shag vans. It’s absurd—and absurdly eye-catching—which is precisely the point. It could raise questions about black-Jewish relations, but of course it doesn’t. This is a Rick Ross mixtape, and the guy who has claimed incarcerated drug dealers like Big Meech and Larry Hoover as role models isn’t exactly interested in an intercultural dialogue.

The closest historical point of reference is Jewish Mafioso Meyer Lansky, who’s been given shout outs from all-time legends Jay-Z and Raekwon. Lansky, who ran casinos in Cuba for a decade and was denied the right of return by Israel for his criminal activities, was also fictionalized as Hyman Roth in The Godfather. This would be a natural meeting point for Ross and The Jews, given how so many Maybach album covers tend to resemble the poster for Coppola’s masterpiece. Yet while the Jewish Mafia is given a namecheck on Ross’ version of Future’s “Gone to the Moon,” Lansky is nowhere to be found.

The Black Bar Mitzvah will definitely cement Ross’ place among 14-year-old Jewish private school kids looking to spend their bar mitzvah money while also wanting to be black, but that’s about it. He’s taken a stereotype once used as an excuse for vicious discrimination and presented it to be as harmless as it actually is. That we can look at an album cover like this and see nothing but the universally bizarre is without a doubt a good thing. If you’re keeping score at home, you can call this one Good for The Jews. Ross thought up at least one good tagline for The Black Bar Mitzvah, and it’s a fitting one: “Everyone’s invited.”

From this author: Why I Gave Up God But Still Keep Kosher
The Beastie Boys Album That Changed Everything

David Grossman is a writer currently living in Brooklyn. You can follow him on Twitter at @davidmeirrobot.