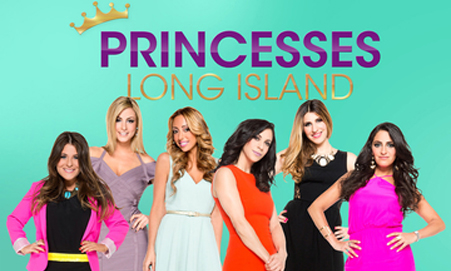 I grew up on Long Island. I say that with a mixture of pride and dread—proud because I survived relatively intact (and with great clothes) but also dreading having to hear about that kid you went to college with who was from Roslyn. That said, I like to consider myself, at least in my role as Jewcy editor, as something of a Strong Island guardian. Like, when you tell me I ‘don’t sound like I’m from Long Island at all,’ and I’m supposed to thank you, that’s annoying. And when more than five people I know professionally sent me the link to Bravo’s new show, Princesses Long Island, which premiered last night, I don’t really know what to think.

The nice thing about reality TV these days is that you can pretty much assume everything from the plot lines to the dialogue is scripted, and not actually real at all. But Princesses Long Island hits so close to home (literally!) that it’s unbearably painful to watch. The show centers around six twenty-something young women who live with their parents on Long Island, enjoying the lavish comforts of home and the unending affection of parents who only want them to be happy. But it’s not the 2013 reality of having to move back home because your unpaid internship never turned into that long-promised full-time gig or because your landlord jacked up the rent and your entry-level job doesn’t pay enough—these young women simply never left, and never plan to, until they meet Mr. Right.

The direct transition from dependency on parents to dependency on spouse is one of the most disturbing aspects of the show, which features mostly daughters of wealthy Jewish families who don’t visibly hold jobs (there is one cast member who works, we are constantly reminded). “You need a man to take care of you,” Chanel’s father says during a Friday night dinner. The 27-year-old is obsessed with getting married: “There’s an old Jewish proverb that says, ‘When you marry an old maid, you get a faithful wife,” she tells the camera in the episode’s opening voiceover. “But let’s be honest: no guy on Long Island is going to fall for that one.”

The problem, we learn, is that these girls just aren’t finding guys as great as their fathers—a recurring theme throughout the first episode, encouraged by the mothers and lamented by their prospect-less daughters. It’s twisted and kind of gross. Here’s Ashlee getting a mani-pedi with her dad, wondering how she’ll ever meet a guy who’s as good as he is (“I’m looking for amenities,” she later explains of her ideal mate):

The other irksome part of the show, which mostly reeks of cast members itching to promote their personal ‘brands,’ is the way Judaism is on display, less a religious affiliation and more of a personality trait. Erica, who’s set up as the 29-year-old lush (she falls down while drunkenly singing ‘Hava Nagila’ in the preview for the rest of the season, omg), tells the camera, “We’re reform Jews, which kind of means we’re not that Jewish.” Her father then fakes a blessing before telling the kosher-keeping Chanel, who’s over for a barbecue, that the non-kosher hot dogs are, in fact, kosher.

“Everybody has a stereotype of a Long Island Jewish girl,” Ashlee says at the nail salon, “People get so offended, I’m like bring it: I’m Jewish, I’m American, and I’m a princess.” While there’s certainly something to be said for owning your identity (less so for promoting it shamelessly on television, though), the way they yell ‘Shalom’ in greeting, repeatedly misuse the word ‘verklempt,’ and play up their Jewishness for the camera is pretty revolting. But then again, so is mostly everything else about these young women.