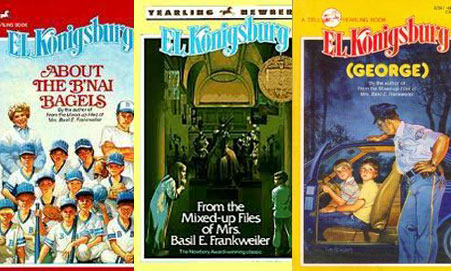 We were saddened to learn that E.L. Konisburg, a Jewish American author whose true-to-life depictions of adolescent life endeared her to young readers, died Friday at 83. During her lifetime, the author and illustrator published 16 books and was a two-time winner of the Newbery Medal for From the Mixed-Up Files of Mrs. Basil E. Frankweiler (1968) and The View from Saturday (1997), and the only writer to receive the Newbery Medal and a Newbery Honor in the same year.

Throughout her career, she famously modeled her characters on her three children and hoped to write something that reflected their growing up. As she explained to Scholastic:

Konigsburg also revealed that she used ‘what-if’ questions to help frame her stories. “Suppose you get on the school bus tomorrow morning. What if suddenly the school-bus driver can only speak Hungarian and your best friend won’t speak to you at all? Suppose you get up in the morning to see the sunrise, and what if the trees in the light of day are all blue instead of green and the sky is red instead of blue? Suppose you’re sitting in school, and what if you are suddenly not right-handed but left-handed? What if you are suddenly blue-eyed instead of brown-eyed?”

Born in New York City, Konisburg grew up in various towns in Pennsylvania and originally trained to be a chemist. After teaching at a private girls school in Jacksonville, Florida though, she rediscovered her childhood interest in painting and writing and soon published her first novel, Jennifer, Hecate, Macbeth, William McKinley, and Me, Elizabeth in 1967. Her most recent book was The Mysterious Edge of the Heroic World (2007).

Natalie Schachar is an editorial intern at Tablet. A recent graduate of Barnard College, she has written for the Times of Israel, The Atlantic, The Argentina Independent and Lilith Magazine.