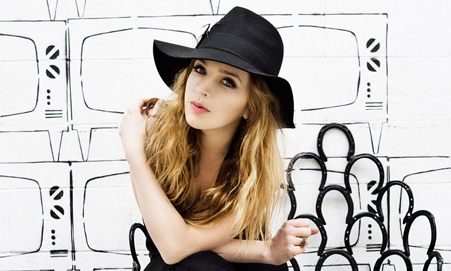 Whether you’re a fan of rock, R&B, hip hop or blues, singer and musician ZZ Ward has something for everyone. Beyond her killer ability to gracefully fluctuate from genre to genre, she rocks awesome fedoras, lots of gold, and has a puppy named Muddy Waters. Although Ward is Jewish, she didn’t know until 3 years ago. Read on!

Zsuzsanna “ZZ” Ward, 27-year-old native of Roseburg, Oregon, had been playing the bar circuit until her now-manager noticed her soulful vocals four years ago in Los Angeles. Her album, Till the Casket Drops, came out last summer, and the Down and Dirty Shine Tour kicks off at the end of August in Seattle. ZZ’s star is on the rise, and her staying power is a sure thing.

Is ZZ a childhood nickname?

Yes—My name is Zsuzsanna. It’s Hungarian and it has two z’s in it, so people started to call me ZZ when I was younger, and it stuck.

How did you get into music, more specifically blues and hip hop, and what instruments do you play?

I play harmonica, guitar, and piano and I got into music through my dad. We’re from Pennsylvania, but he really got into the blues when we moved to Oregon. I started to listen to Muddy Waters, Big Mama Thorton, and Howling Wolf because of my dad, and I got into hip-hop through my older brother who was listening to Nas and Jay-Z. I would steal his CDs, like Outkast, Snoop Dogg, and Biggie. Then I would play in a local blues band in Oregon and I would also drive up to Eugene, OR, an hour and a half north, and to play hip-hop shows. I did everything I could do in Oregon and I really wanted to make it in music, so four years ago I moved down to LA, and then things started to happen!

I love your cover of Frank Ocean’s, “Thinkin Bout You.” You also collaborated with Kendrick Lamar on the track “Cryin’ Wolf.” Who else would you like to work with and what is it about hip-hop that draws you in?

Thank you. I’d love to work Pharell and Kanye West. For me, I love hip hop rhythms and beats and I love the swag of rap. I love the way they use the words and how they make up their own word, it’s so creative. I love the drive of it as well, like on Illmatic where Nas talking about getting out of where he was, but he was bigger than where he was, and I can relate to that.

I always think that as an artist you should be making music that you like to listen to. If you’re making country music and you get in your car and listen to old 1990s hip hop, than what are you doing? My music wouldn’t be complete without hip hop being a part of it.

Do you find yourself yearning for the country or are you happy in LA?

I like the country, but because I tour so much I get my taste of country life a bit. LA isn’t very pretty and isn’t really scenic, but I appreciate the opportunity here. I grew up always wanting some kind of outlet and I made music my outlet, but here there are so many things you can do with your talent. I really love LA.

What’s your vision for the Down and Dirty Shine Tour?

I got my record deal playing live in a room for people and I grew up playing in my dad’s street band on the bus and on street corners. I played music at the most random places you could ever imagine. So for me it’s really about going out there and sharing that with people.

Yes, just being raw. And that’s the thing, people come out and say they love it because I sound like the record and that’s so refreshing to hear. The musicians in my band love playing live, too. We travel so much it can be exhausting sometimes, but we all love performing, and I think you feel that on the stage no matter what city we’re in.

Some of your lyrics are about this certain type of bad boy—and then there’s also the total opposite character, and it seems like you root for the underdog as well. Would you say you draw from personal experience in having that dichotomy of taste?

Yeah, for sure! Bad choices. I think that good songs come out of bad choices and good choices, but for me on this record it was a lot of bad choices. So yeah, in, “Move it Like U Stole It” I’m singing about hooking up with a dork, and in others I’m talking about this bad boy. It can also be how I look at a person who has different sides to them. That was a good question—I’ve never had anybody ask me that before.

In retrospect it was so obvious, but my grandmother denied it initially, because she went through the Holocaust and converted to Catholicism when she was 16 to save herself and her family from the Nazis. She denied it for so long, until finally, when I kept asking her, she told me and my mother that she had been Catholic for more than 70 years. My mom asked her, ‘What were you before that?’ and she said, ‘Jewish.’
She’s gotten a little more comfortable with opening up and telling me things. She used to have to wear the Star of David on her clothes and all of her family went to Auschwitz. They didn’t move from Budapest until my mom was four so they also went through the Cold War. So yes, I’m newly Jewish and I never knew my entire life until I found out.

That’s intense. How old were you when your manager asked you about your name?

It was three years ago. And it took a while for my grandma to really confirm it. It’s amazing because in retrospect Friedman and Fleisch are really Jewish names. I also didn’t really grow up with religion, but now I know so many Jews. It’s cool because I get to learn about traditions from them and I’ve been to temple. It’s definitely something I want to continue in my family and I want to learn more about. I’m very proud of it.

So what was your favorite festival to play at?

My favorite festival recently was Firefly.

I saw you! It was an awesome performance.

Oh, you were there! It was amazing. I never played for that many people before so it was really wild! I got on stage and for a moment I was like, ‘Oh my gosh there are so many people out there.’ It was such an amazing show. The sound was perfect. It was also a really well put-together festival. But festivals in general are super fun. They’re way different than playing inside a bar and you get to make new fans. One of my favorite parts about it is that I get to see other musicians play.

And finally, tell me about your adorable puppy, Muddy Waters.

She’s sitting by me right now in the passenger seat. She’s a very sweet dog—she’s been raised on the road, on the tour bus. She loves it and the band loves having her on the road. She’s a real joy to have. I put her in a little security uniform the other day. I think I posted it on my Instagram. I always said I wouldn’t be one of those people that dress up my dogs, but I do.