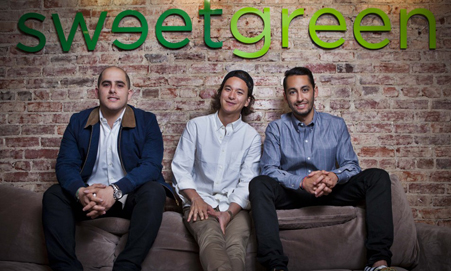 “Sweetgreen for lunch or Sweetgreen for dinner?” This was a common question throughout my college career, and I’d say four times out of the week it would be one or the other. I’m not the only Sweetgreen freak—there are many fresh food lovers, and many of my friends, who have flocked to the D.C.-based salad establishment since it opened in 2007, seeking salads, health juices, and frozen yogurt.

I spoke to Jonathan Neman, who, along with Nicolas Jammet and Nathaniel Ru, founded the salad chain, which also produces the annual Sweetlife festival at Merriweather Post Pavillion in Maryland (featuring artists such as the Yeah Yeah Yeahs, Phoenix, and The Shins). From opening their first location in Georgetown, which had no room for diners to sit and eat, to gearing up for their New York City debut, the Sweetgreen crew knows what they’re doing—and they’re clearly doing it well.

Where did you grow up and what did you study in college?

I grew up in Los Angeles, and I studied business management, entrepreneurship, and finance at Georgetown University.

How did the idea for Sweetgreen originate? Why salads?

Sweetgreen originally was something we wanted to build for ourselves. We looked around and nothing like it existed. The whole lifestyle is built off this life that we live. Could you have a meaningful productive life that’s still fun, and can you still eat healthy food and have it be delicious and affordable? So from the beginning we wanted to create a lifestyle surrounding healthy food.

Did the idea for ‘Sweetlife’ idea come before Sweetgreen?

Who thought of the name?

The name originally was going to be ‘Greens,’ based on a place in Australia where I went abroad, and that obviously wasn’t very inheritable, so we quickly started brainstorming and thought Sweetgreen had a nice ring to it. You know, a late night brainstorming session while we were in college.

As you’ve said—and as I’ve experienced—Sweetgreen is much more than just salad. It’s also a lifestyle of music and sustainability. Do you think you’re going to expand on it or are you happy with what you have right now representing the brand?

We would definitely like to add to it, eventually. The brand is based on this idea of experiences and passions coming together, with food, music, and juice, but in time, it could really be anything. We’ve talked about hotels, retreats—it can be an airline! The idea is to just focus on the core and build a brand that stands for something, so for right now we’re going to focus and stick to what we have, but one day we could be a lot more. We have a very long-term vision; we want to do this for the rest of our lives. If we build the culture we’re talking about and stay true to our values, this could be something so much greater.

Agreed! You guys are very eco-conscious. Was it always in the plan to source from local farms, and to compost?

That was almost a given for us; sustainability growing up in our generation was a common thing. I wasn’t like, ‘Oh, we’re going to be sustainable and that’s what’s going to define us,’ it was more like ‘That’s what you do.’ So it wasn’t really a huge, strategic question.

Did expanding Sweetgreen to multiple locations make it any more difficult to stay true to your vision?

The beauty of the way we built our business is that it’s based off these values, and one of them is to think sustainably. That’s not just from an eco-friendly perspective, but also from a business perspective in terms of making good long term decisions. We’ve been able to create a better, more renewable, and truer business as we’ve grown. We have more purchasing power, more infrastructure in terms of people, and I think the service, design, and food quality have definitely improved. So as we’ve grown, we haven’t had to cut corners, but on the contrary, we just keep putting back in to the brand.

You get really big names for Sweetlife, like Passion Pit and Phoenix—is that just from knowing people? How did it get to be so big so fast?

Originally Sweetlife started from knowing people. Our first festival was friends playing a parking lot, and through knowing some music managers and DJs, we kicked it off. But now it’s grown tremendously. Some of the acts we know and they’re our friends, and the other ones have come because it’s a legit festival. We do pay for artists, but the artists, for the most part, really believe in what we are doing.

I’m very happy that the once-seasonal pesto dressing is back year round. For seasonal salads, do you guys sit around and mix ingredients and decide ‘This is going to be our June salad?’

Yes, happy to say the pesto is now permanent! We absolutely do. Nick Jammet is the director of food and beverage, so he presents two different options to us based on what’s in season. So every month we taste a bunch of different things, and it makes for a really great day!

How many locations do you have right now?

We now have 20 locations.

How do the three of you split up the responsibilities?

It’s really all over the place. I’m mostly in charge of development, finance, and people; Nate Ru does marketing and branding, and Nick runs food and operations. The main job for the three of us is mostly culture, strategic vision, and growth.

Where would be your dream spot to open up a Sweetgreen?

Lots of dream spots! I’d ultimately love to open one in Bondi Beach in Australia, where the concept originated.

So, you’re the one Jew of the Sweetgreen crew

I’m the one Jew. Every good business needs one Jew, right?

I don’t disagree. Do you have a strong Jewish identity?

My Jewish faith is more cultural for me. I grew up Jewish and had a bar mitzvah. I celebrated Shabbat every Friday, although it was less a religious thing and more a family thing. I thank my parents so much for making us celebrate Shabbat, because at the time we would fight it. I come from a huge family and have 20 first cousins. We’re all best friends, so what they’ve created is incredible. My faith is very spiritual now. I’m really into meditation, but I identify myself as Jewish and I meditate, which is my way of praying.

Original Poems of Torah and Shabbat