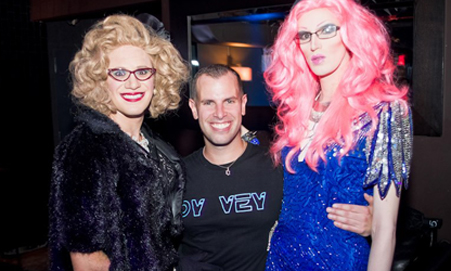 Forget the High Holidays—Jayson Littman, the 35-year-old founder of He’Bro, is gearing up for the High Homodays on September 21st. No, I’m not kidding.

He’bro is a gay Jewish event promotion group in New York City that aims to bring together gay Jews (and non-Jews) who want to meet, mingle, and hopefully land their Jewish dream husband. Littman, who began playing matchmaker in 2007, formerly worked in finance, but has taken a break to commit to He’bro full-time.

Littman grew up in what he calls a “black-hat” Orthodox community, and struggled with his gay identity for many years until the inception of He’bro, which celebrates all sexual identities and honors their Jewish background. He wrote an essay for Tablet earlier this summer about his decision to get a tattoo on his “T-spot”—his Tefillin spot.

Where did you grow up and what was your relationship with Judaism?

I grew up in Washington Heights in an Orthodox community. There are two communities, which consist of Yeshiva University and then the Breuer’s community, which is the more “black-hat” German-Jewish community. We grew up in the black hat community. I went to Breuer’s Yeshiva from kindergarten through high school. When I was in 11th grade my family moved to the Midwood section of Brooklyn and after high school I went to Israel for two years, where I became even more black-hat than I already was. Then I came back from Israel and I continued Yeshiva in Brooklyn while I started shidduch dating, and then I was in college at night to get my bachelors in business.

I started He’bro six years ago. The concept came about from the Jewish Christmas Eve straight party, the Matzo Ball. I was living with three straight roommates on the Upper West Side, and every Christmas Eve I would have some gay friends over because we didn’t want to go to the Matzo Ball anymore. Then my three roommates got married, and I moved into a studio that could fit at most eight people. So I contacted a local gay bar and told them I needed a space for 20 or 30 people, and asked them to open that night, because they were supposed to close. The owner was also Jewish, and gave me one floor to use. It was 2007, when Facebook was blowing up, so I created an event on Facebook and then it just kept multiplying. Over 200 people ended up coming. The police had to shut it down because it was over capacity. And I thought, ‘Maybe there’s something here.’

The next year I contacted a larger place called Splash, a gay night club, and the owner said they usually aren’t open on Christmas Eve, and that the gay market was already niche and hard to fill. A bartender happened to walk by and said he worked at the Matzo Ball every year and explained how successful it was, which swayed the owner. They agreed to do marketing and advertising, I promoted it, and the party ended up attracting more than 500 people. I realized there was a business here, so I started doing it on the side and decided to expand to other parties throughout the year. Our main party is Christmas Eve, the second biggest is High Homo Days, which is our High Holidays party. We do Homotaschen for Purim, and Cederlicious for Passover.

So you’re making money on admissions?

Yes, just admission. I’m feeling confident about others things I’m doing over the next year to expand the business nationally.

Since the parties have started getting publicity I get emails from all around the country from gay Jews asking, ‘Hey can you do a party in Montana?’ and I say, ‘There aren’t enough gay Jews!’ But then I also get emails from major cities like Chicago and California. New York has the largest gay Jewish population. I’m planning a big winter party retreat in Miami.

I’m now dividing He’bro between destination parties and trips. You’ll be the first to know about this actually, we’re doing this party in Miami, the working name of the trip is ‘Jewish Boys Gone Wild,’ its going to be our first national party. In the gay community they have all these destination parties. Theres ‘Gay Days,’ which is when Disneyland goes gay for the weekend. There’s one in Miami called the ‘Winter Party,’ and one in New York called the ‘Black Party.’ They have all these other gay destination parties, why not have a ‘Jewish Boys Gone Wild’, a whole weekend retreat. It will allow people from other states to have the He’bro experience. People have started to fly in for our regular parties, because it’s really unique experience.

I bet. Especially for people who live in the middle of nowhere.

Exactly. Even from nearby cities, people arrange buses and cars to come in from Philly, D.C., and Boston. I actually just came from a meeting with a travel agency about the Miami trip, which is scheduled for winter 2014/2015.

Who do you hope will judge?

Have you been a successful matchmaker? Have many couples have met through He’bro?

I know about five couples who are dating, or moving in together from our He’bro parties, which feels really good. Its funny because not all of them are Jew/Jew couples, some of them are Jew/non-Jew couples. We have this term ‘bagel chasers,’ or ‘goy toys,’ which describe non-Jewish gays who go for Jewish gays. The gay community has the term “chasers” for a lot of things, like chubby chasers.

What about Jewish girls who love to have gay friends? Is there a name for that?

No, but there should be one specifically for Jewish girls who like gay guys!

What’s your involvement in Jewish life these days? How have your views shifted as your Jewish identity has changed?

It’s interesting, that’s a very good question. I grew up very Orthodox, and when I was reconciling my gay identity with my Orthodoxy, I never had a problem with Judaism. I always loved being Jewish—my problem was with the Orthodox community and finding a place there. When I came out I didn’t want to be that person who fought the Orthodox community and demanded acceptance.

I joined a gay synagogue in New York City, I still do all the Jewish holidays, and am very connected to Judaism, but not from the Orthodox perspective. When I first came out everyone was asking me, ‘Why don’t you go to Reform Judaism or Conservative Judaism?’ but I never felt a need to do that. When you grow up Orthodox its weird jut to transfer, because I know nothing about any other ideology. I don’t feel the need to be part of any denomination, but that’s probably the same as many young people. But I do freelance in Orthodox Judaism a little bit, just because of my family.

What do you mean?

I go home for the holidays, and if I go home for Shabbos dinner, all of a sudden I’m not using my phone, and essentially I go back to being Mendy—which is what my family calls me. My Hebrew name is Mendel. I never went by Jayson until I came out.

How did they react when you came out?

Well it was really tough for them in the beginning. And I think for any parent when their kid comes out it’s really tough, but for Orthodox parents it’s much harder. It’s difficult because of the religious values, but also the community, since Orthodoxy is very wrapped up in what the community thinks and how the family is perceived.

I never really had a problem with the Judaism because I came to the conclusion that God doesn’t have a problem with me, it’s just the Orthodox community that does. I’ll sum it up easily by saying it took me 10 years to come to grips with my gayness, so it’s taken my parents about the same amount of time, too. Which is fair. Now my parents have eight grandchildren, so a lot of the focus has shifted from the problems of their children to the grandkids.

Tell me more about the vision behind He’bro.

When I created He’bro it was really about celebrating the two identities. We’re past the struggle, we’re gay and we’re confident about it and we’re Jewish and confident about that as well. We only do parties and events in gay spaces. We don’t do anything in Jewish spaces. Our primary identity is our gay identity, and we just happen to be Jewish.

It’s a place for people to express their Jewish identity in an environment that’s comfortable for them. In the gay community I’m considered a nightlife promoter, which I love, because that’s how I market He’bro. I think I’m the only promoter in New York City who gets emails and phone calls from mothers.

What do they say?

It goes from good and bad. One time I got this email from a mother on Long Island who bought her 26-year-old son a ticket to one of my parties, then she emailed me saying, “I just purchased this ticket for my son to one of your parties, can you let me know if he went there?” I started laughing but was I also touched. I thought it was adorable, because she wanted her son to meet other Jewish guys. Then I also get calls from mothers who get mad when they see pictures on Facebook of their son topless at one of my parties. They start yelling, ‘How could you do that and ruin his reputation?!’ I say, ‘your son is voluntarily posing topless. I’ll take it down, but…’

They’ve very provocative. We have go-go boys wearing yarmulkes. It looks like a regular gay night cub experience but its always themed to the holiday. At the High Holiday party we have go-gos and a confession booth where you write down your sins on on a big white board. So it’s really in line with the holidays. For the Passover party the go go boys were dressed up as Egyptians and we gave out Manischewitz shots. At the Christmas Eve Party we had Jewish santas and drag queens walking around. But for the Homotaschen Party on Purim, people don’t get dressed up. That’s because when gays get dressed up they go all out, so they can really only do that once a year, on Halloween. To expect them to do that on a random Saturday in March is a lot to ask.