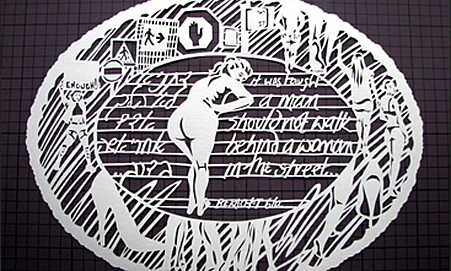 “The Ladies Guild Collection is a series of paper-cuts that combine rabbinic misogyny with sexualized images of women, all on a nice paper doily.”

That’s the introduction to artist Jacqueline Nicholls’ paper-cuts series, The Ladies Guild Collection, which focuses on misogynist rabbinic texts and their rigid depiction of women’s roles in Jewish life. Nicholls, now 42, grew up in an Orthodox home and was often angered by the representation of females in traditional Jewish texts—scenarios that were at times mirrored in her everyday life.

Nicholls’ interpretation of and frustration with specific Talmudic texts are portrayed through the mediums of embroidery, corsetry, drawings, and print, depending on the text she has chosen to analyze. Besides being a full-time artist and mother, she also teaches adult Jewish education, where she continues to question societal norms and open a dialogue for those around her.

I’m interested to know about your Jewish background and how you’ve mastered the texts so well.

I grew up in a very traditional Orthodox home and I went to a mainstream day school which wasn’t Jewish. But I grew up shomer Shabbat and observing kashrut, and then after I completed my degree I studied at Nishmat, which is where I fell in love with Jewish learning. What I gained most from Nishmat, which is a traditional women’s yeshiva in Jerusalem (a very unusual place; I went there the second year it was open which added to the excitement of being there) was direct engagement with textual learning—learning the skills but also having the sense that it’s your own personal responsibility to engage with these texts yourself and not be reliant on a teacher or rabbi to translate and interpret, but instead to come up with your own readings and understandings and develop your own relationship. I think that was very formative. I was about 20 or 21. It was a very serious, high-level textual study.

Were you always artistic? Did art and exploring Jewish texts become a natural marriage for you?

I was always drawing as kid. My family was always drawing as well, so I was involved in making things. Now I don’t have an issue speaking in front of people, but as a child I wasn’t so confident speaking my mind, so drawing was a way to communicate. We grew up very observant of all the holidays, but, when I was five or six, my mother allowed me to draw on Shabbat, because I was very upset that I wasn’t allowed to draw, and she was upset that I hated Shabbat because of that, so she let me. When I was older I began to better understand what Shabbat was about, but looking back now I think it’s really interesting that my mother did that.

It’s really nice she did that. You may have had different views about Judaism, or at least about Shabbat, if she hadn’t.

Yes. I also think it took a while as an adult to really feel that I had permission to call myself an artist and say, ‘Yes, I am an artist.’ And yes, the works that I’m doing in terms of this engagement with Jewish texts and ideas is a legitimate thing to make art about. It’s not Judaica, it’s not decorative, and it’s not always about making things beautiful. It’s about challenging, questioning and exploring to make art.

You also teach adult Jewish education. What topics do you cover?

I teach a couple of things: I teach Tanach, the Hebrew Bible. I also teach some other Jewish programs like Jewish law, but I mainly teach Tanach.

There’s a lot of anger in your work about Jewish textual depiction of women. How do your projects reflect the relationship between men and women in Judaism?

I don’t think it was one particular moment growing up of, ‘Gosh, it would be so much easier to do this if I was a boy,’ but it’s little things, and those little things all add up. That’s what my series of paper cuts is all about. It’s taking these lines that were written in a particular time and context that still carry a certain weight today because they reflect attitudes that are still present. It’s also not an attitude only within the Jewish community, treating woman as separate, and as objects.

It’s the view that having the women’s voice included in the discussion of halacha and how Jews should live is not valid. It’s very much a discussion in which men participate and women are talked about. I started the series of paper cuts with a couple of things that made me very angry, and I felt I had to get them out into the open. Then more and more frustration kept coming out and my anger increased.

How do you think the depiction of women in texts affects men?

There are very misogynist texts. Women are the direct victims but it also harms men that women are being treated and talked about in this way. But men’s roles in misogynist texts are also representative, like the fact that they can’t take sexual responsibility for themselves, so women have to cover up. That’s not a dignified way for men to be portrayed. I think it limits what a man can be and it keeps it fixed in a very rigid way. It’s a very black and white; there’s only male, and only female. It limits both of us and it harms everyone. The complexities of human life don’t fit into any category.

Do you feel a change is imminent?

Yes. Has it been fast enough? No. The fact that, recently we had the Yeshivat Maharat graduating female Orthodox rabbis, that wasn’t conceivable 20 years ago. It’s hugely groundbreaking, but it’s not a big deal that there are these knowledgeable women who learn to that level—it was groundbreaking that somebody gave them certification. What’s also groundbreaking is the demand for them. These women have jobs, and there’s a big demand among Orthodox communities who want female leadership.

I also think the democratization of traditional Jewish learning and text is progress. I’m sitting in London doing my Daf Yomi drawings, which include a page of Talmud a day, and I have the option to go online to share it or I can go on Twitter and have a conversation with people all over the world who are doing the same thing.

The ability to make connections has grown, and now we have easy access to these texts. I think the fact that we’re able to have immediate access to conversation about texts and issues even though we’re living in very different countries is very exciting.

How do you choose which art medium to use for each text?

I’ve used lots of different art forms, so when I was working with the misogynist texts, it felt right to use paper cuts. There’s something very satisfying about taking a sharp knife to these words, but also you’re left with a very stark black and white image which represents misogyny well.

I did a series of embroideries called Ghost and Shadows, based on various stories of women in the Talmud. They are anonymous women who aren’t main characters, and have no names. They’re fleeting but very haunting. I chose to use embroidery because it’s a very feminist craft—you can hide something and put it four layers down so you have a sense that it’s underneath the page, so it fits conceptually with that.

Do you find your audience is more male or female?

I think my work speaks to different people depending on what resonates with them and their own life experiences. I think some of the work speaks more readily to women, especially the Ladies Guild Collection because I think there’s a recognition of, ‘Oh yes, I’ve been really annoyed by that particular text, and now we’re going to laugh at it together.’ And in particular with the paper-cuts I try to have at least a bit of a sense of humor, although I do think they became angrier as that series went on. I don’t know if it speaks more to men or women, I’ve had really interesting reactions from both.

I always include a summary about the text I’m working on for each piece, so people can familiarize themselves with the story. I’m always really intrigued by people who have had a very traditional upbringing, like those who come from a Yeshivish world who can instantly recognize things which may be quite subtle. I try to use different aspects of Jewish ritual life as vocabulary within my work. So whether or not you recognize that is how familiar you are with Jewish ritual life. Sometimes I need to point it out, but its always interesting when I don’t have to translate and people just get it.

(Image from the Ladies Guild Collection, by Jacqueline Nicholls)