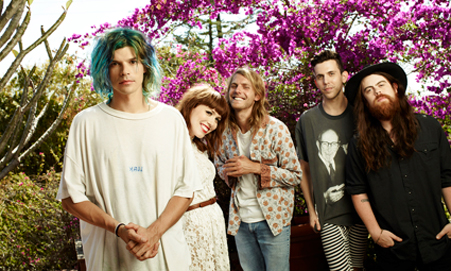 The funky and energetic quintet’s sound is a dreamy mix of pop, rock, and dance. I spoke with Ryan Rabin, Grouplove’s talented Jewish drummer, as he prepared for the group’s Seesaw tour, which kicked off on Monday, September 9, in Seattle, WA.

Rabin comes from a musical family (his dad was the guitarist and vocalist in the rock band Yes) and has been playing the drums for as long as he can remember. We chatted about Grouplove’s unique new tour plan (fans have the option to see them in a club or a church), as well as Rabin’s musical influences.

It seems serendipitous how the members of Grouplove all came together. How did you meet and realize you were all musically on the same track?

It was about four summers ago. For various reasons we all ended up individually on the island of Crete in Greece at an art residency in a little village. We met there, and we were all at very different places in our lives, but also all in the same transitional phases. We made friends and bonded over music but never actually played or collaborated together while we were there. About a year after we initially met, everybody visited me in Los Angeles. They were from all over—Christian Zucconi (vocals, guitar) is from New York. Hannah Hooper (vocals, keys) is from San Francisco, Sean Gadd (bass, vocals) hails from London, and Andrew Wessen (guitar, vocals) is also from Los Angeles.

They came over to hang and we ended up recording a couple of songs in my home studio. It was just supposed to be that one day, and it turned into two months of recording. Everybody moved into my parent’s house and we just kept making music together. Then we realized it was something really special and we didn’t want to pass it up and that’s when everybody kind of sold everything and moved out to LA to actually make the band work. That’s the short version!

You guys are gearing up for the Seesaw Tour, which kicked off in Seattle this week. It’s a two-night city tour with one electric show and one acoustic, which is an awesome idea. Who came up with it?

It was actually our manager’s idea. Many songs on both of our albums were initially formed on the guitar or the piano. For a band like us that’s frequently on the road and does a lot of event giveaways and private shows for radio station winners, we already have a bit of experience getting the songs down to some of their original forms. Our manager came to us and said why don’t we do a two-night show where one night is full electric sound, and the next night we strip it down and take it to that bare bones level where the songs started. We thought it was a cool idea and something our fans would really gravitate towards. Besides being in smaller clubs then we were used to and being closer to the fans, it’s cool for them to be able to experience the songs in a way that most fans don’t get to. Our lives shows are usually so energetic, and you kind of just get to let go of yourself as a performer, so I’m curious to see how it’s going to translate when the vibe is a bit more chilled out. The acoustic sets will be at offbeat places like a church, an old lodge in a cemetery, and other underground venues.

What have been some of the greatest differences in the creative process of your first record, Never Trust a Happy Song, and your new album, Spreading Rumors?

It was definitely a more cohesive process this time around. It was much more collaborative. We were coming off three years of touring when we made Spreading Rumors. For Never Trust a Happy Song, we hadn’t toured much at all before making it, so in general we are a better band and better at playing together from all of the touring experience, so we capitalized on that. We didn’t really take a break after touring ended, we just went straight to the studio. It sounds like a tighter union and more of the songs were written together at the same time rather than bringing our individual ideas to the group and having them put their spin on it.

What inspired the title Spreading Rumors?

It originated a while ago from something that someone in our crew said to us at but we had forgotten. It was a long time ago and we sort of forgot about it. Then someone on our tour brought it up six months later when we were about to record do the album. We were thinking of weird funny names and then the title Spreading Rumors came up. It kind of stuck with us, and as we made the album it started taking on actual meaning for all of us and represented our process, and how the songs sort of spread like a rumor. They take on as they’re being written, and then as they’re released they take on a new life for everyone in the band and everyone who listens to the songs and interprets them in their own way. It’s about that objectivity and how songs take on a different meaning for all of us.

Your music video for “Ways to Go” stars a fake Kim Jong-Un as a young boy. Where’d that idea come from?

The director brought the idea and we thought it was so cool how a song can completely change someone’s perspective on a topic and bring that childhood innocence to someone. We also thought it was such a funny idea. The song sort of encompasses that innocence and vibe of selfish memory.

You grew up in a musical family. Tell me a bit about your musical trajectory and how you learned to play the drums.

My grandfather was a musician and so is my dad, so music has been in my family for a long time. My dad is a very accomplished guitar player and he never actually pushed me into music, which is why I think I wanted to do it so much. I have no idea why I picked up drums instead of guitar, I think I would have had a much easier time and the right access to people if picked up guitar, but I always gravitated towards the drums and piano. When I wanted to make music it was encouraged and supported and I think that’s what helped me develop into the musician and producer I am today.

How has your Jewish identity influenced your life and music?

In my life, Judaism has always been about tradition and family. There are so many different facets of Judaism within my family. We have reform Jews, atheists, and also Orthodox cousins who live in an Orthodox community in South Africa, so we really run the gamut of different levels of Judaism and how we consider religion and tradition. It was always important to celebrate family. We still do Shabbat when we’re together and really recognize the traditions. I think they’re important and Judaism has always been a part of my life.

Who are some of your and Grouplove’s musical influences?

For Grouplove, the influences are all over the place because we all have different tastes. For some reason that’s why the band works creatively. But I grew up listening to classical music that my parents would play to get me to go to sleep, and I think my first album I ever bought was Further Down the Spiral by Nine Inch Nails. I’m still a huge fan of Trent Reznor and I think a lot of his techniques have influenced me. There’s some stuff he did on that album that just really pushes the boundaries, especially for that time, I the late 1980’s and early 1990’s. Even musical arrangement-wise it was so outside of the norm of the time but still he managed to have a massive hit single and album so I thought that was really cool. Further down the line I got more and more into pop music like Michael Jackson. I think I lie in the two extremes. One side Nine inch Nails, one side Michael Jackson.

Right. As a pop lover, what did you think of Justin Timberlake’s performance on the VMAs?

It was a little long for me. I would have liked a little more ‘N SYNC to be honest, but I think he’s an amazing artist and he has really great songs. That’s what matters at the end of the day. It’s about good song writing, regardless of the genre.

Completely. What’s the coolest spot your played so far and where do you hope to play?

I always remember this festival called Optimus Alive! in Portugal. It was our biggest show at the time. It was our first time at the festival on the main stage, we played right before Blondie and Coldplay. No one really knew who we were, and it was just an incredible show. The fans in Portugal are so supportive. The power went out in the middle of another song and it was a crazy feeling. For a while Coachella was a dream festival to play at because I’ve been going for the last 10 years, but I think it would be pretty cool to play the Hollywood bowl in LA, since I’ve seen such great shows there like Radiohead and Nine inch Nails.