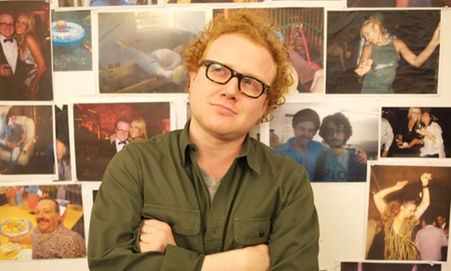 Everyone loves a redhead, especially a red-headed comedian. Brad Wollack is an Emmy nominated writer, producer, and comedian who hails from San Francisco, CA. You can usually find him being taunted by Chelsea Handler on one of E!’s best shows, Chelsea Lately (in competition only with Keeping up with the Kardashians) for his red hair and tendency to kvetch. Besides being a regular on the show’s roundtable, he also serves as a co-executive producer and writer on the show.

I talked to him about Lil’ Bow Wow, his wife, and how his red hair has helped him become a well rounded individual.

Well you’re assuming I think I’m funny now. I honestly think I’m going to be found out any minute. That’s the true nature of everybody in comedy, writing standup or whatever. You’re not that funny but you can fake it for long enough. I guess I was always a funny kid. I liked to perform and make people laugh. I never thought I’d pursue it as a career until I was graduating college and I had many ideas about what I could do in life. I liked being silly. I did work for the TV station in college and I did a few professional things as well. Then I was working in comedy and someone told me to do stand-up, so that worked out for a bit. It just built and built—if someone would have told me years ago I would have been a stand-up comedian I wouldn’t have believed it.

How has your red hair played a role in your work?

Well I think that goes back to the issue of performing when I was young. My red hair was always an attention-getter. People would frequently come up to me to touch my hair and chat. I think it’s also made me really comfortable with people, which makes it easier to be on stage. It kind of became a trademark for me. Especially when I started with Chelsea Lately; I had this massive curly Jew-fro and it became my hallmark. Chelsea told everyone in America they should think I’m ugly because of it, and it took off. And then two weeks ago I shaved my head in defiance. Some people think I look a lot better and some people think I should bring my Jew curls back. Physically I think I look better but it was kind of my signature thing, so…

You can always grow it out and shave it again.

I can. My big fear was that I didn’t think people would find me funny anymore. It was kind of like Samson; it was my strength. But yeah, I can always grow it back.

Chelsea Lately is a daily show so we go in every morning and it’s a blank slate. We have to get everything ready by 3:30 p.m. to tape for that night. It’s a crunch time thing. We prepare and put a show together but a lot of it is a last minute creation. Fortunately we’ve done about 1,100 episodes now and we have a rhythm. Nothing is scripted other than “here are some jokes if you want to use them, Chelsea.”

After Lately is a different process. It’s a scripted show so we spend many months in the writers’ room crafting stories and creating an outline. It’s scripted in a way similar to Curb Your Enthusiasm.

How does your wife feel about being referenced in some of your jokes?

She’s gotten better with it. She’s realized its kind of a necessity, but she doesn’t completely love the fact everything about our life is fair game (although, she does enjoy the nice lifestyle). I also think my honesty is what’s so appealing to the people at home watching. All the comedians on Chelsea Lately are really honest about they are and what they do. There’s something relatable about that. Of course, if my wife asks me not to say something I wont. But I’ll likely let Chelsea know and then Chelsea will mention it…

So then it’s not your fault, completely!

Right, it’s all fair game! You can’t tell Chelsea anything and expect it to be kept a secret.

How old is your son?

Spencer is a little over a year and half.

I saw your BET interview and thought it was very funny. Do you enjoy rap music?

I do. We were in London and we ended up at a club and somehow ended up at the table of Lil’ Bow Wow. Well, now he goes by Bow Wow—it’s a lot more mature than Lil Bow Wow. I was texting my wife, ‘You will not believe where I am right now.’ I like whatever’s popular; for all I know, Bruno Mars is a rapper.

I’m a huge U2, Bruce Springsteen, Tom Petty, and REM fan. I think I was supposed to stop progressing after the 1980s. I’m kind of an old man in that respect. But that doesn’t mean I don’t love hip-hop. I love hip-hop. I don’t want your readers to think ‘Oh what a fucking loser.’ I was poppin’ bottles in the club with Bow Wow.

Sounds fun. Were you ever bar-mitzvahed? What was your theme?

I sure was! The theme was sports!

I know! There’s a girl in my office whose brother’s gay and I think the most telling sign was that his theme was Broadway musicals. Mine was sports, particularly basketball.

What’s your relationship with Judaism?

I’m culturally Jewish. I enjoy a great corned beef sandwich but that’s basically where it stops. I am a huge Chinese food fan, especially on Christmas.

Same. Is your wife Jewish?

No, she’s a shiksa! She’s pretty good looking. And our son looks like the perfect Aryan. Hitler would be very proud of our son.

I’m sure. Who are some comedians you look up to?

Its funny, growing up there wasn’t anyone who I truly loved. My earliest exposure to stand up was actually my dad showing me the first Ellen DeGeneres HBO special. I was also a huge fan of The Naked Gun. Leslie Nielsen was just brilliant.

Nowadays I love Ricky Gervais. The characters he’s had and his stand-up is hilarious. I’ve been a fan of Louis C.K. for a while. He is so smart and conversational in his stand-up. It’s so right on. But my biggest stand up idol, the first one I was like ‘Oh my god,’ was Dave Attell.