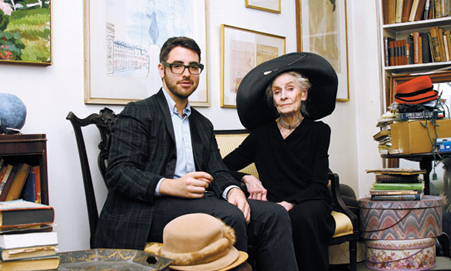 When I called Ari Seth Cohen for our phone interview, he was at a friend’s house. This friend wasn’t a similarly-aged companion, but instead a 68-year-old woman named Debra who lives on Manhattan’s Upper East Side. I asked if I should call back another time, but Cohen said it was alright, that most of his older female friends don’t mind when he does some press at their homes—after all, what better place to discuss Advanced Style, his street style photography blog, than from the home of one of its subjects.

Although Cohen, 31, was always interested in art and fashion, the inspiration to start photographing older women came from his grandmother, who he calls his best friend. After her death, he decided to pick up a camera as a way to connect with fashionable older people he encountered across New York City. Although Cohen’s photography started as an odd attraction, his dedication to displaying the enthusiasm and vitality of his subjects is incredibly heartfelt. His subject pool includes men and women above 50, but women tend to get the focus thanks to their flair for fashion and makeup.

He has a book out and is producing a documentary about his experience, both called Advanced Style. “Don’t worry about getting older,” one woman explains in the trailer for the film, “every era builds character.”

I was always into art; I studied art history in college, but I only started taking pictures five years ago when I moved to New York City. I started with my roommate’s Nikon Coolpix, and then I taught myself how to take better pictures and developed my skill. But photography was just a way for me to connect with older people. I wasn’t planning on being a photographer, it just happened because of the project I was working on.

So there was never a thought to photograph another type of subject?

No. Only older people.

Well, I grew up in San Diego and my grandmothers were my best friends. I always had a very positive idea of what it’s like to get older because of how fun and interesting they were. One of my grandmothers went to graduate school at Columbia University and she would tell me as a little kid to move to New York if I wanted to be creative.

I finally moved here in 2008 and I approached the city through my grandmother’s eyes. I wanted to meet older people because she had passed away, and then I began meeting all of these incredibly interesting, active old people. At first I wanted to interview them for my own project, which I wasn’t planning on sharing with people. Then I decided I had good material and I started my blog.

What’s a day in the life of Ari Seth Cohen like?

Well, today I woke up and posted on my blog. Then I met up with my friend Debra Rapoport on the Upper East Side, she’s putting together a website for all the hats she makes. After this I plan to walk around the city—I walk everywhere—taking pictures of older men and older women, and hopefully I’ll be able to make connections to interview them and share their stories with other people.

Do the older ladies cook for you, grandma style? Have you recruited recipes?

I do want to work on a blog post of recipes but I haven’t yet. Debra always cooks, and she’s a good cook, but it’s not really a grandmother/grandson relationship between these ladies and me. They are more like my friends. We walk around and go to galleries and museums.

Tomorrow I’m traveling with this 80-year-old woman to a conference in Michigan on elder abuse. We’re going to speak there about the work we do together, which is hopefully changing people’s ideas of what it means to grow old.

I think that people neglect, forget, or ignore older people and don’t realize their worth. They don’t realize that they still want to be heard and that they still have a lot to offer. Oftentimes you look at someone who’s older and you may think they don’t have the same understanding of the world, but all the people I meet are so aware and present.

On your website it says you’re working on an Advanced Style documentary due out this year. What’s the focus of the film?

There are six ladies that my friend and I have been following for the last five years since I first met them on the street. A lot of them have found new careers in modeling and acting all from being exposed on the blog, so it follows their story and the story of the blog.

Oh definitely uptown, that’s where I spend most of my time.

What’s your favorite part about your job?

First of all, it’s being able to spend time with such incredible people. But over the course of the past two years I’ve also come out with my book and I’ve been invited all over the world to speak and meet more interesting older people in different communities. It’s been incredible to hear their stories, travel, and be able to document it and share it with the world. It’s amazing when an older person emails me after seeing the blog and tells me how it has impacted their life and how they feel about themselves. Or even a younger person saying they feel less afraid of getting older.

How have younger people—and your friends—reacted to your interest in older people?

My friends totally get that this is the perfect thing for me to be doing; I’ve always spoken so much about my grandmother. I haven’t found much disapproval. When I go on dates people are a little surprised, but it is a quirky interest.

Irving Penn at the Met