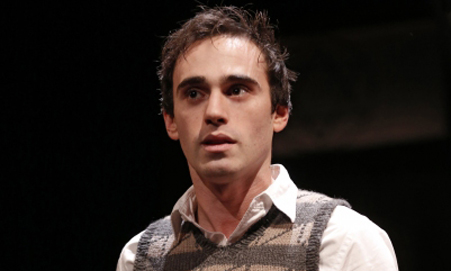 I met Ari Brand, the star of the off-Broadway play, My Name is Asher Lev (based on the Chaim Potok novel), at the Westway Diner in the Theater District for lunch at 12:30 p.m. on a Wednesday. He had a short lunch break before his 2 p.m. pm show, and wanted to make it back to the theater to warm up by 1 p.m. (His pre-show ritual usually involves standing on stage and stretching, doing some vocal warm ups and chatting with the actors who play his parents, Mark Nelson and Ilana Levine.)

For lunch he ordered an egg and cheese sandwich and raspberry zinger tea to soothe his overactive vocals. Brand grew up downtown Manhattan, and now lives in Prospect Heights, Brooklyn with his girlfriend, a sociology PH.D candidate at NYU.

Are you exhausted right now? It must be hard to do two shows a day and still meet for lunch.

It’s totally exhausting. And I’ve never done a run of a show for this long and played a part this big. I don’t leave the stage for 95 minutes. So I’m really, really tired, but if the show feels good and it’s energizing then I’m relaxed and it’s great. If the show feels like a struggle, which it does sometimes, then it’s so much more exhausting. If there’s a week of those types of shows, I’m dead, I’ll go hibernate on my day off. Recently I’ve been going to the gym—gotta stay in show shape.

Tell me about your own personal connection with Judaism and how it affects your work.

I come from a family of half atheists, and the other half, my father, was raised Orthodox and then left that community. I was raised with Jewish traditions; I went to temple very minimally, I did have a bar-mitzvah. I went to Jewish camp for 12 years, and I’ve always identified as Jewish but didn’t always believe in God. And I don’t, now.

So you identify more as an atheist?

No I never call myself an atheist, but if somebody says do you believe in God I say no; but I’m Jewish because I’m culturally Jewish. I’m not sure how I feel about it. I think that so many of the archaic Orthodox rules are so problematic.

What are some parallels or differences between you and your character, Asher Lev?

I’ve always been supported as an actor by my family; my mother was an actress, singer, and musician, my father was a concert pianist. My brother is a neuropsychologist, so that takes off some of the pressure. And my mother always told me I had to try to be an actor if that’s what I really wanted. So it’s a privilege that I’m increasingly grateful for, and in that way I am nothing like Asher Lev. My father had a strict Orthodox father and left the community because it was too restrictive on him, so he has a much closer tie to Asher. In many ways, I’m telling his story.

Yeah. What’s crazy is that I didn’t realize it until about halfway through the first run of the show. Throughout the rehearsal process it didn’t even enter my mind, it was maybe a week or two into doing the show that I was like, ‘holy shit, this is much more my father’s story.’ And I think as an actor you struggle with how much you can relate to a character, because of course you want to be able to relate entirely.

Is there a particular emotion that you enjoy acting out the most in Asher Lev, or one that is most fulfilling?

I have the privilege of playing a six-year-old in the play. I think some of the most fun moments I have on stage are the ones that are filled with the awe and wonder and excitement that Asher gets from drawing, and showing his mother the drawings he made of her. She gets so excited about it too, and I think it’s the happiest moment of his life.

What were some of your most significant roles that led you to where you are now?

In sixth grade I did my first professional production, which was an off-off-Broadway performance of Macbeth. That was the first time I understood what being a professional actor/struggling actor truly meant. A lot of these people were waiters, barely getting paid anything, but they had so much integrity and gave so much of their free time to their craft. They were such lovely, fun, energetic people that showed me how wonderful actors are.

Also in college, The Long Christmas Dinner by Thornton Wilder was a play that stretched me to my limits of what I could do as an actor. It went very deep and I was in the midst of studying my craft and sort of a Russian mentality of acting which is very deep, intense, and experimental. So that’s when I applied all that I was learning, and it was really special.

I know you’re in ‘indie surf’ band called New Facility. How do you have time for that?

We’re on hiatus right now. I tried to make it work for a while but then realized it was too much. We just have fun playing.

How did you guys meet?

My band mate (guitarist/lyricist) was my camp counselor. He was the first guy I ever collaboratively played music with. We were Jew camp rock stars at 11! He was a serious influence on me musically, and also just an awesome role model. After college he was in Brooklyn and I was in Brooklyn, and we decided to get together and start a band. Another guy who was his camp counselor at Camp Eisner joined as well, and he was the drummer (now have a new drummer). It’s a fun side project for the three of us to do when we have the time. Nobody is that serious about it, we’re not trying to make it big. We play plenty of live shows and we network with our friends. But most importantly we just try and have fun. If people contact us to play that would be great, But we aren’t searching.

Who are some of your musical influences?

I was raised with The Beatles, folk music, lots of Bob Dylan, Phil Oakes, Joan Baez. And I was a massive Green Day fan in fourth grade, massive. My friends pretended to each be individual members of the band. I was Mike Dirnt, the bassist, because I thought he was the guy in the background that didn’t get enough credit, and I like that guy. Then I got into hip-hop in eighth and ninth grade. I was a big fan of the underground scene, like pre-famous Mos Def and Talib Kweli; also I love Kanye and Jay-Z. Oh, and there was a massive swing movement that came out for about two years with Squirrel Nut Zippers and Big Bad Voodoo Daddy in 1996. It was part of the skater culture mixed with the zoot suit thing. I got full into that.

Do you know what you’re acting in next?

If something else presents itself then there are some decisions to be made but for now I’m just doing Asher Lev. It has an open-ended run so we don’t know when it’s going to end.

Yeah, and it’s doing so well.

Word of mouth is really, really strong, which is so impressive. It’s a universal story. There were two middle aged African-American ladies who came backstage after the show and said how much they loved it. We said, ‘we just have to know what made you come see the show,’ and they said their choir leader told them they must see it.

If you hear it’s about Hasidic Jews you expect a certain thing, but I think people have been surprised with how much they can connect with the play. Many people, especially in New York, have parents or communities that don’t approve of what they’re doing. I think doing the play in New York is very interesting because it seems to be the city of refugees. It’s a city where people come to find themselves and to escape. This play speaks to those people.