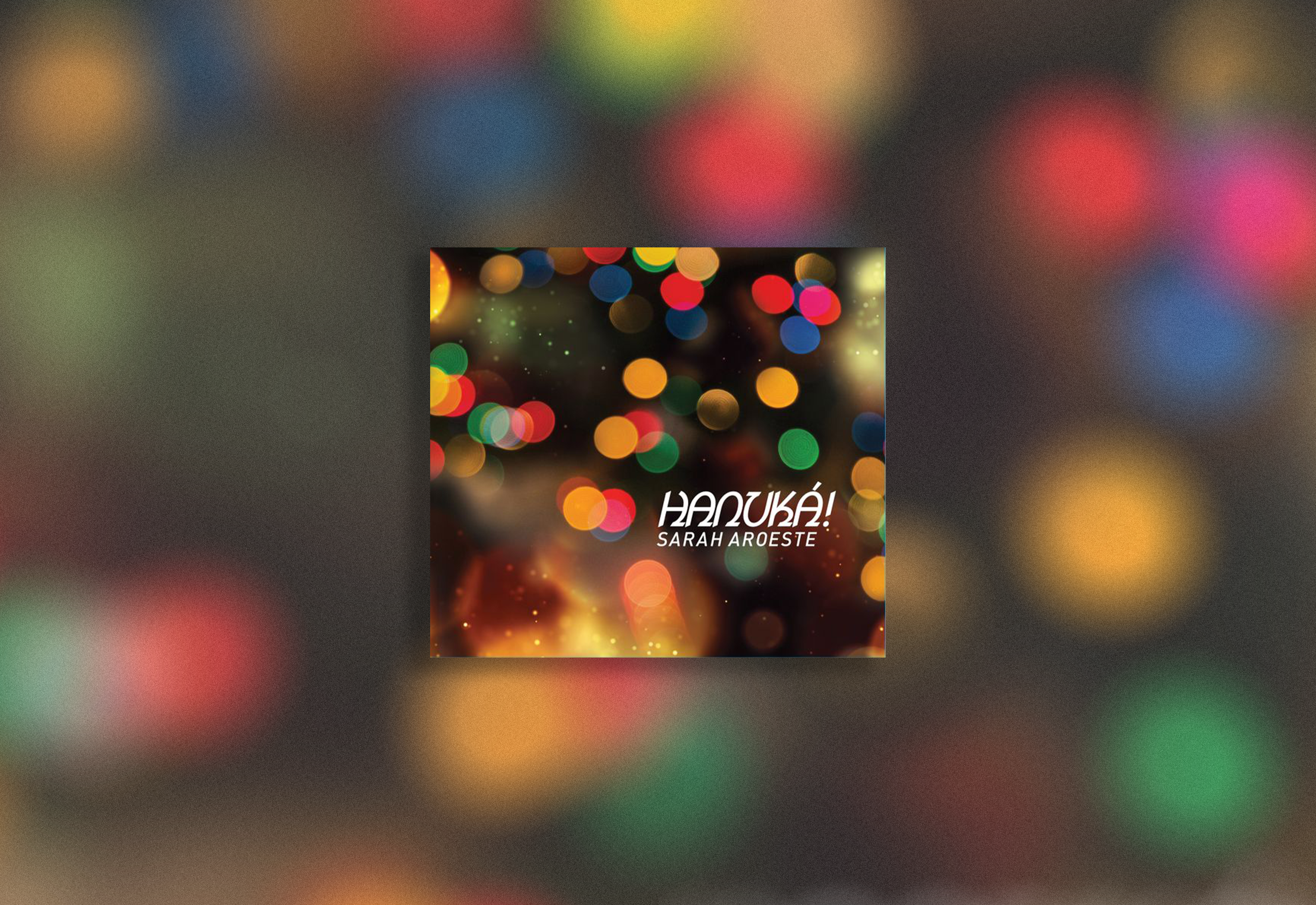 Sarah Aroeste is a Sephardic Renaissance woman. What can’t she do? She’s a singer, writer, activist, and mother. Her work spans from multiple records to a children’s book, Buen Shabat, Shabbat Shalom, which is printed in both English and Ladino. Aroeste’s previous album, Monastir–a passion project named after her grandfather’s city of origin–showcased her range and talent, while also putting her family’s story at the forefront.

This time around, Sarah Aroeste is making history by creating the first all-Ladino Hanukkah album, Hanuká! The record is a gorgeous reimagining of the Jewish holiday, shattering our preconceptions of what Hanukkah music should sound and feel like. In every way, Hanuká! is an instant classic. And while I could go on and on singing Aroeste’s praises, the album speaks for itself and deserves a top-to-bottom listen before taking its hard-earned place in your holiday playlist.

I sat down with Sarah on Zoom to talk more about her groundbreaking record, and after gushing about bimuelos for a good minute, we got down to business: the music and the festival of lights.

This interview has been edited for length and clarity.

When did you decide to release a Hanukkah album? How long has this been in the works?

So, I was already in the middle of recording a different album, and then last winter, while I was recording Monastir, and doing everything from my monitor, I had so many Zoom Chanukah appearances. And for all of these appearances, I had to come up with an interesting repertoire, not only to keep my audiences excited, but to keep me excited. I found myself with all that I had researched and I realized, I have enough to make an album with such a treasure trove of material that most people have never heard of.

There was something about COVID Hanukkah last year that felt different than previous years. We were all hungry and thirsty for joy. But it came out so visibly for Jews during the Hanukkah season in a way that I feel like it hadn’t previously. I just felt like it was so joyful last year, despite the pandemic, and I wanted to harness some of that joy and combine it with that repertoire that I had developed over that period.

So right after Hanukkah, I said to my producer, “I know we’re in the midst of recording a different album. But I want to make sure that we record this as fast as we can, so we can bottle this energy.” So I spent about six months as the other album was rolling out  arranging and conceptualizing the Hanukkah album. And this summer, in July, I had a window to go to Israel where my producer lives, and we recorded the Hanukkah album and shot the “Ocho Kandelikas” video at the same time.

Wow, that must have been hard, especially as you were promoting the first album.

If you heard the Unorthodox podcast episode that came out last week, I was supposed to do that months and months ago when Monastir came out. But it kept on getting delayed. So it was actually part of the Hanukkah episode, which was so weird because I actually have a Hanukkah album, but that’s not what the focus was.

So yes, it was a little bit of a ‘ping-pong’ back and forth, but as a creative artist, especially living through the pandemic, I had so much bottled up energy that I just had to get out this year. So, it was a banger, putting out two records, but they’re so different. And I think they both express the joy of Sephardic culture in different ways. They sort of fed off of each other.

They’re really so beautiful and so expressive. In both of them you can feel all the influences of Sephardic culture and what that carries. Can you tell me a bit more about that?

You know, I write a lot of my own music, but on these two albums, I just wrote two original songs. So I can’t take credit for the other melodies and lyrics that are included. But yes, the nature of Ladino music–one of the reasons why I love it so much–is that you can hear both through the melody and the rhythms, the influences of the wide expanse that represents Sephardic Jewry.

As Jews went eastwards from Spain, they picked up influences from all of their neighbors, and to the extent that I could maintain those same rhythms and melodies, I did, because I love them. In some cases, I reimagine songs and I write them in my own way, but I try to give as much of an Ottoman-Balkan-Eastern-Mediterranean feel to my music as I can.

Right, and in that vein, you completely re-imagined “Ocho Kandelikas” in your album with a Flamenco version.

I adored Flory Jagoda who passed away earlier this year. She was such a huge influence on me. And she’s the original. I mean, to say I’m a fan of Flory Jagoda is an understatement. She was everything to me. In terms of her career as a singer-songwriter and Ladino, she is the queen. Nobody can surpass her or her original version. And that song has been done so many times, in every way. For anybody who knows anything about Ladino music, it’s been there, done that. There’s nothing new I can give to it.

So when I was conceptualizing this album, I reached out to Flory’s family and I said, “Listen, I want to put together this album. I don’t want to have ‘Ocho Kandelikas’ on it. And instead, I want to do the lesser-known ‘Hanuka, Hanuka’.” It’s such a sweet song that she wrote–track eight on my album. I love singing it with my children, who actually record it. And I was gonna leave it at that.

While I was conceptualizing my other album, Monastir, I wrote a song that I wanted to have an Andalusian sound to it. So I hired this incredible Israeli flamenco singer, Yehuda Shuky Shveiky, who recorded this song for me on my other album, and as we were recording that, I said, “Wait a second, that is something I could do differently. That is something I could bring to ‘Ocho Kandelikas’.”

As soon as we finished recording the track for the other album, I said to him, “Do you want to collaborate on a flamenco version of ‘Ocho Kandelikas’?” And he was all in, so I really gave him the latitude to arrange it because flamenco is his life. I said, “these are the parameters. I don’t want to move so far away that you can’t tell that it’s that song.” But the only way I would feel comfortable doing it is if I don’t try to imitate Flory but do it entirely in my own way.

And I love the idea of giving it a Spanish Andalusian flair because Ladino comes from Spain. And even though Flory’s version is very Balkan because she came from Bosnia, I was sort of paying homage to her, but also to the Spanish roots of the language. I was pretty confident that a flamenco version had never been done of the song. There have been new Tango versions, and everything’s been done to it, but not flamenco. So this was our chance to really put our stamp on it.

It’s palpable how much you respect and love Flory. In fact, you have a picture of her in the beginning and the end of the “Ocho Kandelikas” music video, which just came out. Did you ever get to meet her?

Oh, many times. I mean, not many, but enough. I sang with her. She was a friend–I’m emotional just thinking about her. It was important, like I said, to give her all the kavod and the respect, because this is her classic, iconic song. And so not only did I want to maintain the integrity of the song, through my version, I wanted to pay a nod to her, that it came from her. So that’s why we felt it was important to actually have her image in the video. So the photograph is at the beginning and at the end of the song. She was just a beautiful, beautiful soul.

She meant a lot to the Sephardic community because she gave us representation. Now, you’re continuing that legacy. What impact do you hope to have in the Jewish community?

My goal in creating this album was twofold. One was to celebrate Hanukkah. Simply put, there had never been an all-Ladino collection of Hanukkah songs. I wanted people to know that there’s lots of wonderful Sephardic Hanukkah songs, and I wanted to create a collection that is just an expression of joy for Hanukkah, and at the same time, also an expression of joy for Ladino.

I said in my liner notes, Hanukkah is a miracle. And so is Ladino. We are here to celebrate that. The fact that it has lasted this long, despite the Holocaust, despite its endangered status, it is still here. Let’s celebrate that miracle. So you put those two things together, and I just wanted it to be an explosion of joy.

And that’s representative not just in the music, but I wanted to have bright colors on the album cover, right? We’re not just stuck with blue and gold. We’re light. We’re all of these colors reimagined. I didn’t want to be this cliche, with a menorah… and you know, dreidel isn’t really what we played with in the Sephardic world. I wanted it to feel bright and Mediterranean, not only the music, but in its color palette and in the feel of it.

Do you study Ladino, by the way?

For many, many years. I started studying it through music. I’ve had teachers along the way. When I write my own music. Most of my albums prior to the last two were all original songs. This Hanukkah album is actually my seventh album, but I do have mentors in the field to review my work before I publish.

And what’s your favorite song in the album?

I really love track number four, “Fiesta de Hanukah.” It’s one that I wrote, which maybe I’m not allowed to say, but it’s the blessings that we say over the candles, but in Ladino. I wrote it using the Ladino translation of the traditional Hebrew blessings.

I love this song because my kids love it the most and they love jumping in on the choruses. It’s just really festive. And I wanted to create my own tradition, being able to say those blessings in song in Ladino.

My personal favorite was “Ya Viene Hanuká.” I loved it.

Yeah! So, Gloria Ascher sings that. She was one of my teachers, and she’s been a mentor of mine. She is a delightful, delightful woman. She was one of the first people to teach Ladino in America in a university. She was the first professor of Ladino at Tufts. I love capturing the voices of my mentors on my albums. Every album has a couple of cameos. And I really wanted to feature her on this one.

What advice do you have for people who want to connect to Ladino?

I’ve actually written resource articles! On my website, there’s a whole area of Latino resources, but in the last three years, or two years, the accessibility for learning Ladino has exploded, especially since the pandemic. Now it’s on mobile apps. There are just so many ways now to connect.

Sarah Aroeste’s Hanuká! is available now on all streaming and music retail platforms, including Spotify and Apple Music. Aroeste’s “Ocho Kandelikas” music video is watchable on Youtube and on her website, which also has resources for learning Ladino and more information on the artist and her work.