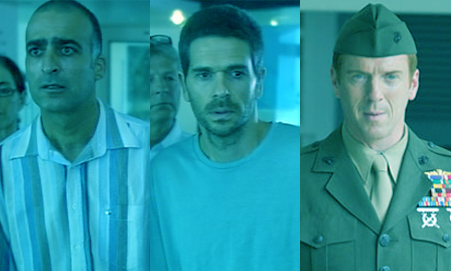 This summer, Hulu began streaming Hatufim (Prisoners of War), the Israeli show Homeland is based on. And while I’m always excited for new devotees of Israeli television, I noticed a strange phenomenon: people commenting on the relative unattractiveness of the Israeli actors in comparison to their Homeland counterparts. In fact, a similar thing happened when I was writing weekly recaps about the Israeli TV show Srugim—there were a few commenters who repeatedly popped up to air their opinion on the female characters lack of hotness.

Look, people are the worst. But they may sort of have a point. It is true that American TV stars, with their airbrushed perfect skin and glossy hair, are better kempt and more conventionally attractive than their Israeli counterparts. That’s partly due to the much lower production budget for Israeli TV, and partly because Israeli media lacks an US Weekly-style obsessive cataloging of every actresses’ baby weight or latest wrinkle.

And while some might prefer everyone onscreen to look like Bar Refaeli, there’s something comforting and refreshing about the every-guy quality of Israeli TV actors, who really look like people you might see on the streets of Jerusalem or Tel Aviv. I mean, would you really trust a CIA operative as attractive as Claire Danes? I have never seen anyone with such shiny hair in Foggy Bottom.

Danes’ character has no exact analogue on Hatufim, but as I pointed out a few weeks ago, the great Israeli Hollywood takeover has lots of Israeli and American actors playing the same characters. Cultural differences aside, some actors manage to bring more believability to their roles than others. To see how the Americans stack up against the originals, here’s a side-by-side comparison.

Israeli version: One of Israeli’s most iconic actors, Assi Dayan—son of famed eye patch-wearing foreign minister Moshe Dayan!—plays Dr. Reuven Dagan. The therapist’s office may be a bit run down and his clothes slightly rumpled, but even while his inner life is in turmoil he still conveys his commitment to his patients.

American Version: Gabriel Byrne plays Dr. Paul Weston, with an Irish brogue that lends gravitas to everything he says. His long silences and distant looks instill confidence—as do his well-tailored suits.

Most Realistic: Byrne. He’s easy to imagine as one of those annoying therapists on the Upper East Side who doesn’t take insurance and makes you pay upfront.

Israel: Yael Sharoni—who also starred in Srugim, my favorite show about the love lives of Orthodox Jews in Jerusalem—plays Lilach Itzkovich-Yafa, the overly opinionated wife of the henpecked Itzko. Her verbal (and implied physical) abuse is a running joke throughout.

America: Liza Lapira plays Lisa Reilly. Lapira is a talented actress, but because the showrunners don’t think America can handle an unlikeable woman, the character is watered down to a bland nothing.

Most Realistic: Sharoni. She was born to play a Grade-A bitch. Plus, Srugim!

America: Damian Lewis is Nicholas Brody, an American soldier who has been held by Al-Qaida since 2003.

Most Realistic: Yoram and Uri. The two must have lost a significant amount of weight to look as emaciated as they do and they never lose their haunted look throughout the season. While I adore Damian Lewis, the man doesn’t even have bags under his eyes.

Show: In Treatment/B’Tipul
Character: A patient going to therapy with his wife to decide whether or not to have an abortion.

Israel: I don’t remember much about Rami Heuberger’s performance as Michael. Just that the character was all kinds of awful.

America: Josh Charles plays Jake, with a penchant for denim and an unfortunate mustache and goatee.

Most realistic: Josh Charles because he is the king of office Passover seders and all things Baltimore.

Israel: Gal Zaid is Haim Cohen, who is convinced the two returning abductees have a secret they aren’t sharing.

Previously: Is That a Falafel in My Situation Comedy?