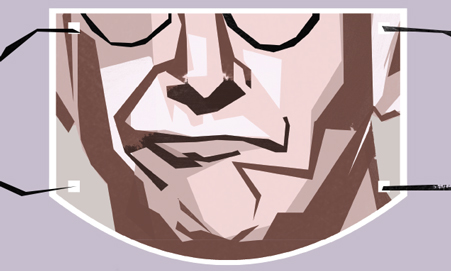 Flu season is upon us, and whether you’ve had it or been around people who have it, chances are you’re probably complaining about it. From sickly coworkers to sniffling family members, no one is safe.

What better way to fight the flu*—and stay stylish—than with these printable flu masks bearing the faces of your favorite Jewish stars? Just download the PDF, cut along the dotted lines, punch holes where marked and tie the mask on, and you’re all set! You can thank us later, once you’ve Purell-ed. Masks by the one and only Margarita Korol of Urban Pop Art Projects.

It’s pretty, pretty, pretty gross out there with everyone coughing all over the place. Take a bold stand against all the sick people around you by pledging allegiance to the king of principled decision-making.

You’re almost kind of getting it together this flu season, but not so much that you’ve actually gotten a flu shot or taken any real precautions. Never fear, the unflappable writer/director/tweeter has you covered—literally.

Bored to death of the interminable flu season? Stroll around Brooklyn fearlessly with Schwartzman’s mustachioed face atop your own. Moonrise Kingdom khaki scout cap sold separately.

Flu season got you on your toes? Take a page from the Black Swan herself and you’ll get an Aleph for effort.

Show the world—or everyone on the subway, at least—that you’re so much more than a run-of-the-mill hypochondriac with this facial salute to the master alarmist himself.

*Fine print: These paper masks probably won’t prevent the flu or any other real afflictions, but they’ll go a long way toward combating hypochondria and looking awesome.