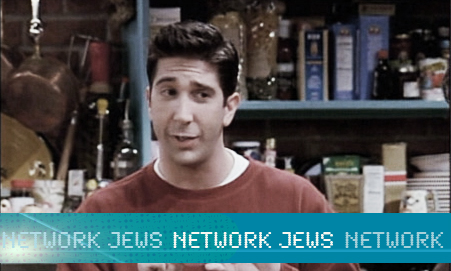 There are two types of people in this world: Those who will proclaim, loudly and often, that Seinfeld is the greatest sitcom ever created, and those who will audibly agree—but secretly prefer Friends.

Any self-respecting MOT in the second group should feel especially ashamed. After all, Seinfeld is practically the televised equivalent of FUBU—or perhaps FJBJ. Though the phenomenally successful series was and is popular among latke-eaters and mayo-lovers alike, many of the series’ most famous episodes—the one with the chocolate babka, the one with Elaine’s shiksappeal, the one with the mohel, for Chaim’s sake—are unapologetic about their Semitic bent. Bright, silly Friends, by contrast, seems blandly all-American, utterly nondenominational—goyish, even.

And yet Seinfeld’s white-bread cousin was created by two Brandeis grads, composed by a writing staff that was “a third to half” Jewish, and largely populated by archetypes familiar to anyone who’s ever logged time at a Jewish summer camp. There’s Rachel Green (Jennifer Aniston), the spoiled JAP with a heart of gold and a fixed nose; her best friend Monica Geller (Courteney Cox), the formerly overweight, hyper-competitive neurotic; and Monica’s older brother Ross (David Schwimmer), the nerdy nebbish with a mournful look and an unfortunate fondness for hair gel.

Though any Jew worth her weight in geldings would recognize these three as kindred spirits, a casual, gentile viewer could go years without realizing that one half of the whitest sextet on television is secretly ethnic. Rachel, Monica, and Ross’ Jewishness is tacit rather than Seinfeld-ishly explicit. It peeks through via their last names, their Long Island origin stories, their fondness for quips, and their difficult relationships with their mothers.

But if your average viewer were forced to choose which Friends character seemed most Hebrew, chances are he’d immediately point to Ross. The series’ unlikely romantic lead has the stereotypically dark looks of what Granny Hall would call a “real Jew.” His intellectually focused profession (paleontologist), whiny voice, and emasculating history (married a lesbian, played the bagpipes, got stuck in a pair of leather pants) also mark him as a classic schlimazel.

Yet even Ross almost never acknowledges his Jewish background. In a way, this makes sense: Ross is an academic first and foremost, meaning he’s much more likely to lecture his pals about evolution than to discuss Talmud. It’s no coincidence that the one time Professor Ross does speak openly about his Jewish heritage—in Season 7’s “The One With the Holiday Armadillo”—he has an educational mission: He’s trying to teach his son Ben about Hanukkah.

Ben, an assimilated kid weaned on Christmas specials and red-and-green wrapping paper, proves a hard nut to crack. So Ross quickly gives up his quest and resolves to rent a Santa suit instead—only to find none available so close to December 25. Friends isn’t exactly known for verisimilitude; rather than visiting another store or nixing the costume altogether, Ross opts for an unconventional outfit and appears to Ben as The Holiday Armadillo. Cue laugh track.

The Holiday Armadillo does manage to achieve Ross’ goal, imparting Christmas tidings as well as the story of Hanukkah—with a few twists, thanks to his well-meaning but dense Catholic friend Joey (Matt LeBlanc). (Says Matthew Perry’s Chandler when the tale is over: “My favorite part was when Superman flew all the Jews out of Egypt!”) The gang ends the episode by lighting up a Hanukkiah—only to forget entirely about Hanukkah when the next season’s “holiday” episode rolls around.

Ross’ blatant addressing of his family’s Judaism is clumsy and goofy; each time Jewish actor David Schwimmer says the word Hanukkah, he sounds like a Spanish instructor deliberately pronouncing the word fajita. Perhaps, then, it’s for the best that his—and Monica’s, and Rachel’s—religious background went mostly unremarked upon throughout Friends’ run. It’s more fun to play a game of “Spot the Tacit References” than to wince at benevolent but awkward attempts to make the implied explicit.

Harry Goldenblatt, the unlikely Casanova on Sex and the City

The Wave Of The Israeli TV Adaptations Continues