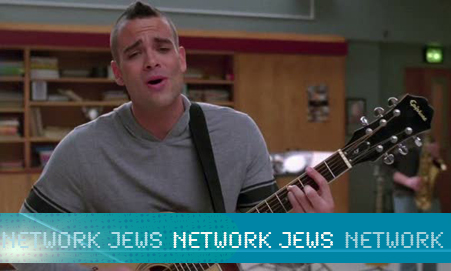 Noah Puckerman (Mark Salling) is the coolest kid at McKinley High. He’s the guy at the beginning of Season 1 throwing Slushies in the faces of the glee club kids (on Glee, Slushee-thrower equals popular person), roaming the halls in his letter jacket and throwing the Marc Jacobs-clad Kurt (Chris Colfer) into a dumpster. But soon he, like fellow football jock Finn (Cory Monteith), joins the glee club—and the rest is spontaneous-bursting-into-song history.

With his good looks and hunky guitar serenades, Puck is McKinley’s resident womanizer. He starts a pool-cleaning business to try and seduce moms. He impregnates Finn’s girlfriend, Quinn (Dianna Agron) in the first season—she blames wine coolers and her having had “a fat day” for her indiscretion. And then he tries to woo Shelby (Idina Menzel), the adoptive mother of their child and a teacher at their school. But thanks to Glee’s ‘anything goes’ plot structure, by the time he graduates at the end of the third season, he’s become a halfway decent guy.

We learn about Puck’s Semitic upbringing in Season 1, when we are introduced to the Puckerman family’s most memorable (and only, really) tradition: watching Schindler’s List while eating moo shu pork on Simchat Torah. Glee really doesn’t do subtle. His mother asks him why he can’t date a Jewish girl, sparking one of the show’s more remarkable dream sequences. In it, overachieving Jewish glee club star Rachel Berry climbs through his bedroom window wearing a nightgown and a gleaming Star of David around her neck.

Of course, in Puck’s dream Judaism is more a means to an end than anything else. “Rachel was a hot Jew and the good Lord wanted me to get into her pants,” goes his epic mid-dream voiceover. Barring the line’s inherent absurdity, the most incongruous part of the statement is his use of the term “the good Lord.” Jews don’t really say that. Puck’s brand of Judaism is distinct—and in contrast with Rachel’s—in how much it is influenced by his predominately Christian surroundings in Lima, Ohio. His expression of faith feels very New Testament. Later in the episode, Puck chooses to show Rachel his commitment to her (and to Judaism, presumably) with what he calls a “personal tribute to a musical Jewish icon:” a performance of “Sweet Caroline”

Rachel’s Jewishness, frequently referenced on the series, is part of why she is constantly made to seem different (Kate Hudson, playing a vicious college dance teacher in Season 4, refers to her only as “Schwimmer”—you know, the Jewish guy from Friends), while Puck being MOT is much more peripheral to his identity. It does, of course, have its plot-driving elements. In Season 2’s “Born This Way” episode, Rachel suffers a kick to the face during dance practice and is given the option of a nose job. After she decides she wants to do it, Puck confronts her in the women’s bathroom at school and tells her to be proud of her Jewish heritage. And that girls at temple always come back after their 16th birthday looking different and less hot. It might just be his character’s most profound cultural commentary. (Spoiler alert: cheerleader Quinn, who has the nose that Rachel wants, had actually gotten a nose job but nobody knew!)

Later, at the mall, Kurt points out that Rachel’s idol, Barbra Streisand, ended up being pretty successful even with her natural nose, at which point the whole Glee gang breaks into a performance of Duck Sauce’s “Barbra Streisand.” A literal end to an overwhelmingly literal episode (they sing TLC’s “Unpretty“), but it works: Rachel cancels her appointment with the plastic surgeon.

As Puck’s character got more three-dimensional, he also neared the end of his senior year. After a touch-and-go finals week (and one My Fair Lady cover), he graduates and moves to Los Angeles, leaving behind broken hearts and pristine pools at the end of Season 3. This season, we got introduced to Puck’s younger half-brother, Jake, who shares a father with the legendary McKinley High alum and so far seems to have the same pre-glee club bad attitude. But instead of the letter jacket, little Puck wears an even more badass leather jacket. By episode two, Puck is back in town to talk some sense into his little brother, who—you guessed it!—ends up joining the glee club.

I’m keeping my fingers crossed for a Puckleberry Jr. sweeps-week fling. Until then, feast your eyes on this fan-made tribute to the original Puckleberry:

Idina Menzel is Marrying a Newsie!