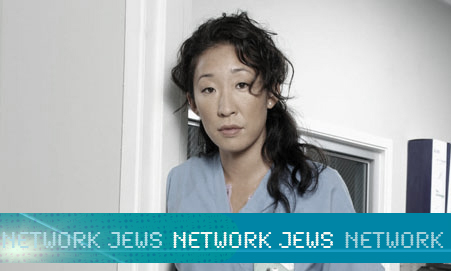 When Grey’s Anatomy premiered in 2005, it was one of the year’s buzziest dramas. It was like ER, but in Seattle, with a better soundtrack and (maybe) a better-looking cast. By Season 4, Grey’s had become a bit of a Hollywood punch line, thanks to stars with big mouths and huge egos, and plot lines involving very loud sex with a ghost/hallucination. But in its ripe old age, Grey’s has enjoyed a renaissance, returning to the sexy, soapy glory of its youth. One of the characters who’s lasted through it all is Seattle Grace’s resident Korean-Jewish-American cardiothoracic surgeon, Dr. Cristina Yang, played by Sandra Oh.

Yang drops her J-bomb in Season 2’s perfunctory Christmas episode, when her boyfriend/medical mentor Dr. Preston Burke (Isaiah Washington) asks her to help decorate a Christmas tree. Turns out Cristina’s not interested in XMas—she converted to Judaism after her mother’s second marriage to a well-known oral surgeon named Saul Rubenstein. Oh delivers the news perfectly, and Washington’s shocked reaction over his morning coffee is classic.

Other shows might have been content to leave Yang’s religion as a multicultural punch line. (According to my not-very-thorough research, Dr. Yang has the distinction of being the only Asian-American Jew on American television. Please comment if you know another one—other than Cristina Yang’s mother that is.) On the other hand, in most hospitals, an ambitious young medical intern might not sleep with her mentor. Neither of these rules apply to Grey’s Anatomy or Seattle Grace Hospital.

Drs. Burke and Yang eventually get engaged. It doesn’t look like there was a chuppah at the Burke-Yang nuptials, but we never get to find out whether any Jewish ritual snuck into the wedding since Burke doesn’t go through with the ceremony (actor Isaiah Washington was on his way off the show, see above re: big mouths).

Most likely, though, the ceremony would have skipped the sheva brachot, since Dr. Yang is an atheist. By far the most intense of the Grey’s team of young surgeons, Cristina believes only in science, and her own talent. She’s only interested in things you can operate on, and God doesn’t make the cut.

Believer or not, Cristina knows how to effectively make use of the great Jewish tradition of guilt, comparing her problems at work to the Holocaust. (There’s a list involved. One list means life…you see where it’s going.) And when Izzy’s (Katherine Heigl) patient/fiancé dies at the end of Season 2 (don’t worry, he comes back, see above re: ghost/hallucination), Cristina is the only one around who doesn’t panic. “I know what to do when someone dies. I am a Jew. I know food and death, it’s shiva.” Cristina’s knowledge of shiva is thorough—she explains that shiva is a week with no mirrors, no sitting on anything higher than a foot, no clean clothes, and no sex (a week is a VERY long time to go without sex on Grey’s). So, we have a spiritually alienated young Jew who instinctively falls back on religion in moments of crisis. Grey’s Anatomy just got real.

At the end of the most recent season of Grey’s Anatomy, Cristina had finally finished up her residency at Seattle Grace. Dr. Yang was planning on moving to the East Coast for a fellowship at Mount Sinai hospital in New York—surely she’s coming for the strong Jewish community. Cristina’s plans might just have been derailed, since she was in a plane crash in the annual season finale bloodbath. But imagine the possibilities if Cristina makes it to New York. A young, talented, newly single Jewish doctor heading to the Upper East Side? I smell a spinoff.