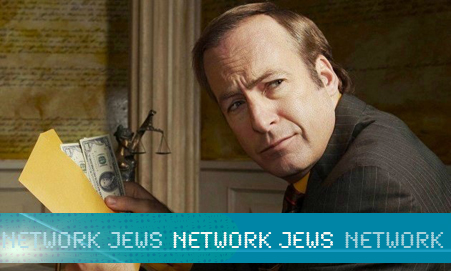 It’s summer, which means time to hole up inside your apartment, crank the A/C up, and grab your laptop for some quality Netflix binge-watching. In that spirit, we present our streaming-friendly Network Jews summer installment, Netflix Jews. And what better show to start than with AMC’s addictive, critically-acclaimed crime drama Breaking Bad, which nabbed 13 Emmy nominations this morning?

When the final eight episodes of Breaking Bad begin airing on Aug. 11, all eyes will be on the cancer-ridden chemistry teacher turned meth kingpin Walter White (Bryan Cranston), his former partner Jesse Pinkman (Aaron Paul), and Hank, the DEA agent brother in law (Dean Norris) who SPOILER just figured everything out. But the show has taken on an increasing number of supporting characters as Walt’s business expands. The first and longest-lived of these adjunct members of the White empire is lawyer Saul Goodman. Played with delightful smarm by Mr. Show star Bob Odenkirk, Saul has provided Walter with much-needed extra-legal advice (helping set up Walt’s former employer as a money laundering front), assistance in sticky situations (using his secretary to throw Hank off the trail of Walt’s RV), and most importantly for viewers, a stable source of comedy on a show that is usually deadly serious.

Breaking Bad may be on its last eight episodes, but a Goodman-based spinoff now seems to be in “full speed ahead” development—good news for some fans, aggravating for others, and as good a reason as any to catch up on the show.

OK, fine. Saul Goodman is definitely not Jewish. He’s Irish (his real last name is McGill), and he changed his name because he wanted to attract clients interested in hiring a Jewish lawyer. His family life isn’t particularly kosher, either—he claims to have caught one of his ex-wives having an affair with his stepfather. But that’s not to say Saul doesn’t have Jewish qualities. In trying to present himself as a Jewish stereotype, Saul becomes a dark reflection of those same stereotypes—a conniving lawyer obsessed with his own bottom line.

Saul debuts in the appropriately titled Season 2 episode “Better Call Saul” as a so-called criminal lawyer rather than a criminal lawyer called in to counsel Walt’s snatched dealer Badger (Matt L. Jones). Saul is a cheesy lawyer prominent enough that his ads are displayed on the bench Badger gets arrested on, right before he’s properly introduced in this horrifying ad showcasing his lack of ethics and Constitution-draped office.

Saul does demonstrate some moral awareness beyond his desire to save his own skin. In the most involved Saul ever gets directly in Walt’s scheming, he has his assistant/bodyguard Huell (Lavell Crawford) pickpocket Jesse to trick him into believing Gus had taken his ricin-laced cigarette and poisoned Brock, his girlfriend’s son. At the beginning of the fifth season, Saul realizes he’d been duped into helping with Walt’s plan to poison Brock and attempts to quit in protest, only to be intimidated into staying on.

Breaking Bad’s premise entails the continual moral growth and decay of its characters—Vince Gilligan famously describes the show’s arc as transforming Walter from “Mr. Chips to Scarface.” Jesse begins the show as a criminal addict, but nurtures his inherent talent and matures into one of the most compelling, sympathetic characters in television history. Walt’s wife Skyler goes from a frustrated housewife to a steely, money-laundering schemer.

In this very uncharacteristic televised universe built on the concept of change, Saul Goodman is the one constant. Though his circumstances change slightly over the course of the show (particularly when he prepares to go on the run), his own moral character, founded on an intense focus on his own survival, does not. Considering the adage that drama is about change (nominally) and comedy about stasis, it makes perfect sense that Saul has largely usurped Jesse as Breaking Bad’s biggest source of comic relief

Not only does Saul’s ingratiating tone and ability to profit from any situation (he gets Walt and Jesse to pay him to become clients when they kidnap him), his horrific, clash-heavy fashion sense and love of excess never changes. “Garish” might be an understatement for a character whose subtler outfits consist of yellow shirts and purple ties. Even Breaking Bad costume designer Jennifer Bryan had to “throw out every rule of coordination.” And one of his pet projects is a laser tag arena he first attempts to convince Walt to use as a money-laundering front, then uses as a hideout for Jesse.

Most notably, Saul seems like the only character certain to survive the events of the final season of Breaking Bad. Not only is he a slippery enough operator that it’s hard to see him getting either caught by the law or killed, Saul now seems likely to wriggle out of even the more serious, real textual ending of the show itself. It’s still unclear whether the Saul spinoff in development will be more comedic or dramatic, half an hour or an hour. Hopefully, the new show will find a distinct tone from Breaking Bad while still maintaining the mother series’ fingerprints, mixing Saul’s lighter nature with the darkness of what he does for a living. Regardless, escaping the boundaries of the series to find a completely new life as the protagonist of his own story is … well, s’all good, man.

Eric Thurm is a third-year undergrad at the University of Chicago and an editorial intern at the A.V. Club. Find him on Twitter to hear about how he once watched every episode of Futurama twice in one weekend.