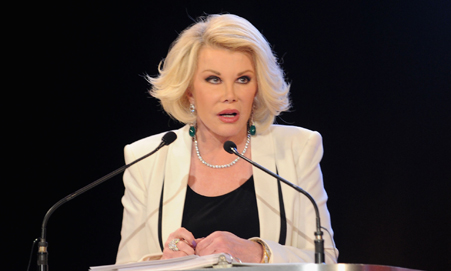 On Tuesday night, Joan Rivers, clad in a silver sequined jacket, took the stage at New York City’s West Bank Cafe. Shining like a disco ball, she warned us she was a little drunk. She had just performed for a group of Jews, and “Uchhh,” she whined. The crowd cheered in the name of inebriation, or something.

Rivers is a legend. If the warm reception of the audience, visibly elated to be in her presence, is any indication, her “Queen of Comedy” crown is still intact. Her facial expressions—scrunched up, eyes rolled, tongue out—were a hit. Her jokes, laced with racism, classism, and ageism, invoked that uncomfortable, nervous laughter—and even some outright roars. Among today’s crop of clever comedians, a “Mexicans are so ugly…” joke would likely be considered lazy and stupid. But Rivers had the woman sitting in front of me laughing through seriously pursed lips.

As her set went on, we got the Rivers List: She hates the old, the young, the homeless, the blind, the Rihanna, and Princess Diana. But it’s pretty obvious that she doesn’t mean what she says—the show’s proceeds were all going to charity. A salad of pointed insults and self–deprecation has always been her act. It’s just Rivers, working her signature style—one that is loved, and tolerated, because she’s been doing it so well for so long with no signs of stopping.

“I think we’ve all laughed at things we didn’t think we’d laugh at,” she told the crowd.

She’s right. She may be off-color and her jokes uncomfortable, but while whispers of, “Oh, she’s so bad” could be heard throughout the room during her set, the crowd is always on her side.

A Year in the Life of Amy Schumer