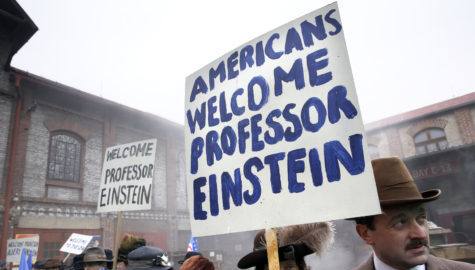 National Geographic’s TV drama Genius is following the life of Albert Einstein, following the personal and professional travails of the great scientist. On tonight’s episode, Einstein (Geoffrey Rush) and his wife Elsa (Emily Watson), seeing the tide of anti-Semitism grow around them, must consider fleeing Germany, and a rising Nazi party.

Now, for the first time, you can watch an exclusive clip from tonight’s episode below, where Chaim Weizmann (played by Peter Jacobson), who would go on to be the first president of Israel, talks about pogroms with Einstein and tries to win the physicist over to Zionism’s cause:

What will Albert do? Read a history book to find out (you can start with this Tablet article), or watch the National Geographic channel, tonight at 9/8 p.m. c!

The Year of Binging Jewishly

Welcome to the O.C., Mench