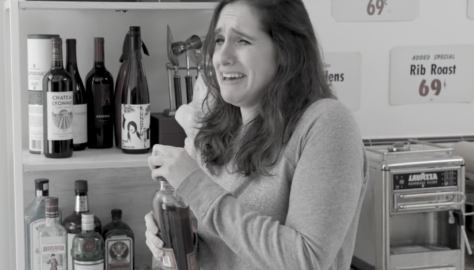 Seriously, it’s been nearly a month, and how has Jewish media missed this? Megan Amram has her own (web) series, and dang it, she’s going to win an Emmy for it… at all costs.

Amram is best known these days for writing on The Good Place, but she’s been killing it at the comedy game for years, (see: Twitter, Parks and Rec, her book). And now, she will be an Emmy-winning performer, in a work entitled, simply, An Emmy for Megan.

The premise of the series is simple: Amram decides that she wants an Emmy, specifically for Outstanding Actress in a Short Form Comedy or Drama Series (she’s also putting up the series for an Outstanding Series award). And so she sets out to fulfill the minimum requirements. 6 episodes? Post online before April 27th? She has this in the bag! Of course, by the end of the first episode she’s in a spiral of pain, in the second episode she loses 40 pounds to fit the Hollywood mold, in the third episode she decides to identify as Korean… You get the idea, but you never know quite what she’ll do next.

And, yes, of course Amram talks about being Jewish. For example, it takes less than three minutes into the series for her to accuse an unsupportive friend of being anti-Semitic.

Plus, despite the show’s short run, there are a ton of celebrity cameos (mostly crammed together), ranging from RuPaul to Seth Rogen. Also, keep an eye out for a more substantial appearance from Jewish Good Place actor D’Arcy Carden.

If you’re in the LA area, you can even watch the new series in a theater, followed by a Q&A with the cast and crew on June 10.

Or, you can just watch An Emmy For Megan in your pajamas, like God intended. The whole thing is just under half an hour: