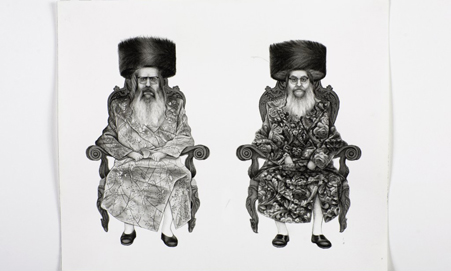 28-year-old artist Michael Levin has always used concepts of Jewish identity as inspiration, whether it was building a shrine to the apocryphal “Red Jews” or painting on shaimos, aka “retired” pieces of scripture. His newest series, Jews of Today, features arresting, intricately detailed depictions of Hasidim in Williamsburg, and is on display starting tomorrow at 7 Dunham Gallery in South Williamsburg. He’s also publishing Jews of Today, an illustrated primer on Hasidic dress, in conjunction with the exhibit.

In the series, Levin zeroes in on the sartorial aspects of Hasidic culture: various styles of beaver hats, the ornate robes worn by the Satmar rebbes, and the “rebbish” hems of shirts worn by boys from prominent families. While his fascination with his pious neighbors borders on reverence, his outsider status and sense of humor keeps the work from becoming a strict homage. I talked to Levin about Italian conversos, Tay-Sachs, Plato, and Orientalism.

Where did you grow up? What is your Jewish background? Was your family observant?

I grew up in Los Angeles, born and raised. Only my father’s family is Jewish; my mother is from an Italian Catholic family in San Francisco, and converted when she married my dad. Of course, there is much speculation about her family origins. Her maiden name is Bonfilio, which is a common name for Italian conversos (Jews who converted to Catholicism during the inquisition).

Regardless, having a mixed background while being raised with a strong Jewish consciousness—a term I use because we were not, nor am I now, religiously observant in any significant way—brought up a lot of issues. For one, friends would constantly say I wasn’t really Jewish, because my mother wasn’t born Jewish. This wasn’t said maliciously at all, just in that casual way that can really stick with you. It was often followed by the acknowledgement that I was the most “Jewish” of all of our friends anyway (in some intangible way that I also could sense but never understand). I guess it got me thinking from an early age about what constitutes “Jewishness,” what that je ne sais quoi is that can make someone so Jewish even without the risk of Tay-Sachs—or without even keeping kosher.

You studied Classics at the University of Chicago. Does this influence your work at all?

I have always been an artist, but not a committed one until my early twenties, after University of Chicago had made an intellectual of me. My studies do inform my painting, but more in terms of big ideas and ways of thinking. I don’t sit down to paint thinking about Plato, but I do think about the issues that interested me in the classics, which centered around the process of cultural exchange and integration, and ways of constructing the insider/outsider dynamic.

When did you move to Williamsburg?

I moved to South 2nd and Bedford in January 2007, about six months after graduating. At that time this was still on the outskirts of what young college grads thought of as “Williamsburg.” I started seeing Hasidim around here and there, and, after deciding to commit myself as an artist, they became the center of my work. At Chicago we were always trained to find “problems”—more like questions that carry the flavor of something wrong or amiss—and make them the starting point for any research. So because of this training, I got very little out of painting landscapes or self-portraits. Hasidim were the only subjects in my view that constituted a “problem” for me. So my painting became a kind of extension of my academic study, and Hasidim a new subject for the same set of questions I had already been dealing with, only now in a more personal sphere, because of my abiding difficulties in establishing my own Jewish identity. Add to that how strangely arresting and beautiful the Hasidic look is, to me at least, and there you have the genesis of this work.

Do you draw mostly from memory? What I’m trying to ask here is: how much skulking around Williamsburg do you do?

It’s almost all from memory, but the way I get my memories is by skulking around Williamsburg, a lot. Part of the reason I’m going to Pratt next year for my MFA and not somewhere else is that I can walk there, and that walk takes me right through the heart of the Hasidic neighborhood. I don’t take pictures of people on the street. I take pictures from my window sometimes, but putting a camera in someone’s face doesn’t feel right to me. Painting is my alternative, a way to preserve my memories and also push my conceptual agenda into them.

Are there any other artistic traditions that inspire your work?

Definitely miniature painting, especially the international Islamic miniature style popular from Persia to India. I want to take Jews out of the European narrative, and there is something about Mughal painting in particular that really suits this subject. Of course 19th century Orientalist painting is a big influence too. I kind of see myself as an Orientalist, because (if you’ve ever read Edward Said), the Orientalist approach was to use exotic cultures to reflect one’s feelings about one’s own heritage, and not to objectively document a different culture.

So I’m looking at Hasidim as this “primitive” eastern culture that nonetheless carries some essence of what makes me me. It’s a laughable idea, and I mean it as a little joke about alienation most of the time. Besides, there is the view that most people have (and never question) that Hasidim are the real, authentic Jews; that we all used to dress like that and then some of us decided to sneak out and put on “white people” clothes. The Hasid is the primitive Jew in the popular imagination, a view which is utterly baseless yet very stubborn.

What’s on the horizon for you? Do you think you will stick with Hasidim as subjects, or do you feel yourself moving in a different direction?

More Hasidim is where my heart is, but the MFA process is bound to push me in some unexpected direction. Whatever happens, I have unfinished business with this subject and will most definitely return to it (if I ever leave it, that is).

Jews of Today is on display at 7 Dunham gallery in South Williamsburg from July 20-31, with an opening reception July 20 from 7-10 p.m. The book is available online and at the exhibit.

Kelsey Osgood is a writer who lives in New York. She has written for The New Yorker, The American Reader, and New York Magazine.

The Parashot in Watercolor